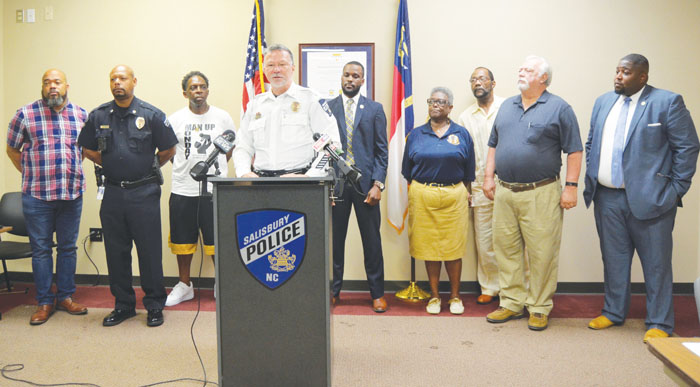 Salisbury Police Chief Jerry Stokes speaks about a collaboration with the NAACP that will employ community partners like those who stand behind him to act as interrupters who could potentially de-escalate violence in a community before it happens. Shavonne Walker/Salisbury Post

SALISBURY — The Salisbury-Rowan NAACP and the Salisbury Police Department, along with other community partners, are collaborating on a crime reduction initiative they call Summer Cease Fire to target gun-related violence.

The groups gathered Monday for a news conference to announce the initiative and how the community can support and participate in the program.

The idea is adopted after the “cure violence” model to engage interrupters and de-escalators who are able to go into the community and involve themselves with issues before violence erupts, said NAACP President Gemale Black.

Deputy Chief Shon Barnes said the Cease Fire program takes an approach that addresses violence as a health epidemic — meaning violence is like a contagious problem that is transmitted through exposure.

Chief Jerry Stokes said the initiative will build on the already positive relationship the Police Department has with the NAACP and is one that will “further enhance our community and engage outreach efforts.”

It also will be supportive of the Project Safe Neighborhoods program by further engaging the most important elements of that strategy, which is advocates in the community, Stokes said.

Residents will be provided with data on where crime may be occurring. Those members will be trained in de-escalation so when there are community conflicts and when there are issues that arise in the community, those involved can speak with a community partner.

The model has been used in many other places including Chicago, Philadelphia and Kentucky, and it has been shown to reduce violence, Barnes said.

Black said organizers have identified five people who will be a part of the program, but they are looking for more.

Chariel Dye, who has been active in several community groups and heads Great Women and Men United, said it’s time this type of program is implemented.

She said although law enforcement officials say the number of violent crimes has dropped, it is still a problem and she’s glad this is in place.

“I think with the collaboration of all these different entities, somewhere in the middle we should come up with a solution,” she said.

“I think the collaboration is needed. It’s necessary, and I’m glad to see it happen,” Dye said.

She said a lot of times people don’t trust the police, but when you get people who are familiar with local activists and community organizers it makes it a little easier.

Smith said he’s been following the cure model for several years. He said this is one of the community-based solutions brought up during the Stop the Violence Summit that was started by Mayor Al Heggins before she was elected to the City Council.

“I’m excited to see the potential in the work that’s been done. This idea has been shopped around here for several years. It’s been part of an active conversation,” Smith said.

He would encourage those who have been impacted by violence, whether they’ve lost someone or “those who live in deep remorse about violent acts they’ve committed,” to support or take part in the program.

He encouraged residents to think about those who’ve been lost to gun violence.

“Rexx” Rexrode is part of the police chief’s advisory board and the Neighborhood Alliance Group. He and his wife moved to Salisbury in 2015.

“Any step toward removing any of the violence that would bother anybody is a step in the right direction. If I can be a small part of that, I want to be,” Rexrode said.

There are three ways to help with the Summer Cease Fire program:

• Report suspicious activity in your neighborhood by calling 911.

• Anonymously turn in illegal firearms by calling Salisbury-Rowan CrimeStoppers at 866-639-5245.

• Share the message on social media using the hashtag #SummerCeaseFire.

There will be a meeting at 6 p.m. Thursday at Brenner Crossing, 610 Hall St., where residents can hear more about the program and sign up.

To sign up to become a de-escalator or interrupter, contact the Rev. Marcus Fairley at marcus.fairley@naacpnc.org for details.