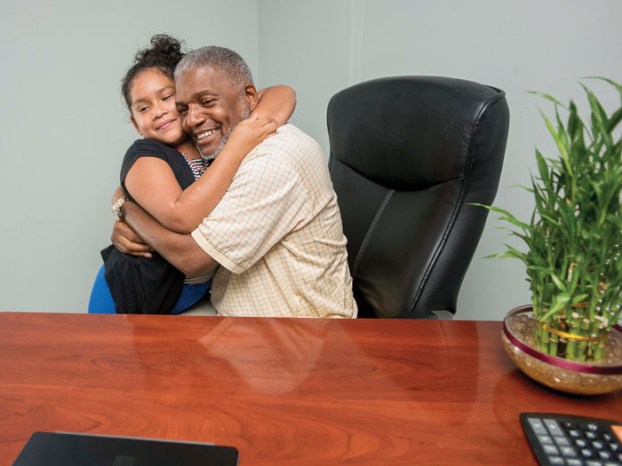 Principal Jonathan Pullin gives a hug to one of his students, Allison Hernandez, on his last day at the Essie Mae Kiser Foxx Charter School in East Spencer. Pullin will become principal of a new charter school is opening in the Eastern N.C. town of Creswell. Jon C. Lakey/Salisbury Post

Pullin turned in his resignation two weeks ago and notified each of his teachers and administrative staff members.

“I felt I’ve taken the school as far as I can,” Pullin said.

Pullin will head to Pocosin Innovative Charter School in Washington County. He said the charter school is that community’s answer to the closing of established schools and the threat of students being bussed to lower-performing schools 30 minutes away.

Board Chairwoman Tina Wallace said the job has been advertised and there are a number of candidates to replace Pullin, some of whom are local. She said the board will close the job posting midweek and begin the interview process.

Pullin said he’s happy about what he set out to do and accomplish with the charter school.

He said he’ll miss the students, teachers and administrators.

Pullin reflected on the first day, which was one of his proudest moments at the school. The community and staff welcomed the students with a red carpet.

He said another proud moment was when the East Spencer town board began recognizing his honor roll students.

“It made me feel like we were being embraced by the community,” he said.

Pullin said the school has been supported by the community including neighbors Holmes Iron and Metal; the local Delta Sigma Theta sorority, whose members donated school supplies; and the Blanche and Julian Robertson Foundation.

He said the staff, under his leadership, was able to change the culture of student behavior. One of the things that was implemented was Essie’s Bucks, a reward system for good behavior in which students could make “purchases” at Essie’s store.

The school also implemented Parent University, in which parents learn Spanish along with their students. Spanish is a part of the school’s curriculum, but Pullin said educators found that though the children were learning a new language the parents weren’t able to help them with school work because they didn’t understand.

This was a way to get parents involved, Pullin said.

Another way he tried to be more involved was to ride the school bus. He often got on the bus in the morning or afternoon to spend even a few minutes talking to parents as their children boarded the bus.

He said it helped him understand the environment from which some of his students are coming from and engage with the parents even for a short period.

He said the key to what he’s been able to do at the school is communication — with the staff and with parents.

“He did have a big impact,” Hernandez said.

She said Pullin would encourage Allison to do better and work harder.

She and Allison stopped by the school on Pullin’s last day and discovered he wouldn’t be returning. Both mother and daughter were near tears after learning they wouldn’t see him in the upcoming school year.

“I’m going to miss you,” Allison said as she gave Pullin a final hug.

Irma Headen is raising her grandchildren, Angel and Heaven.

She said Pullin planted a great seed and she hates to see him leave.

Headen said her grandchildren were struggling when they arrived at the charter school and she’s seen growth in both girls.

“We are really pleased at the number of qualified applications, especially that they have been local candidates. We are optimistic we will find a person qualified to fill the position,” Wallace said.

Wallace said she agrees with Pullin that he was able to create a solid foundation.

“We have been able to retain most of our staff. Also included some new license qualified teachers. We are working with a curriculum specialist. We are definitely in a great place,” Wallace said.

She credits having a stable board of directors that has been involved in the school. She said Pullin’s departure will not hinder the board’s plans for next year.

SALISBURY — The Salisbury-Rowan NAACP and the Salisbury Police Department, along with other community partners, are collaborating on a crime... read more