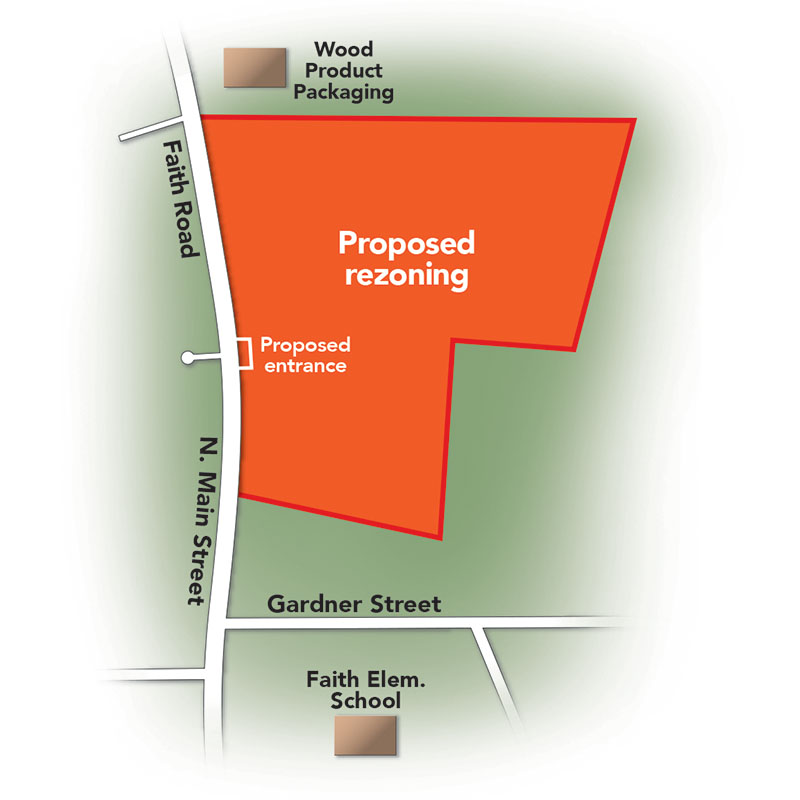 FAITH — A rezoning case will come back before the Faith Planning Board and Board of Aldermen after a citizen took the town to court.

Darrin Brown came before the town to request a former quarry property on Stone Pointe Drive be rezoned from residential to general business to allow for mini-warehouses and businesses on the 22.4-acre parcel. The case went through the Planning Board and the Board of Aldermen and was approved on May 8, 2018.

Karen Haussmann, who lives at a residence that adjoins to the Browns’ property, filed an appeal on June 8, 2018, citing several errors involving the case.

According to court documents, the errors she noted were an incorrect notice to adjoining land owners; the board failing to note findings of fact; the aldermen not considering the town’s long-range plans when approving; and failing to consider that the zoning ordinance prohibits commercial uses within 300 feet of a residence.

Three of the four sides of the quarry property are residences.

The courts ruled that the zoning change and text amendment followed the town’s zoning ordinance and state law. It also ruled neither the Planning Board or Board of Aldermen addressed if the case was consistent with the town’s comprehensive plan, and did not consider if the rezoning would promote public heath, safety and general welfare.

Haussmann said the property, when completed, will increase traffic, which she believes will be unsafe as the proposed entrance is between two hills and is a blind spot for speeding cars, and will increase the noise.

“It’s a sleepy community,” Haussmann said. “These are all homes. Everything is homes.”

Faith’s Planning Board and Board of Aldermen would have to make finding regarding how the rezoning fits in with the town’s comprehensive plan and if it damages the public welfare.

“They didn’t do all of the appropriate actions that were required,” Haussmann said. “The judge basically sent it back and said, ‘do it correctly,’ so now we’re at square one.”

The Faith Planning Board will hear the case again at 7 p.m. Tuesday at Faith Town Hall. Haussmann hopes that residents show up and offer their concerns.

“(Faith) wants this and I don’t know where to go except to let people know what they’re doing,” she said.

After the ruling of the court case, at the May 14 Board of Aldermen meeting, then-Mayor Pro Tem C.J. Moody announced that Todd Peeler had offered his letter of resignation. The board approved it and elected Moody to serve as mayor and Matt Lyerly to serve as mayor pro tem. Moody spoke following the votes.

“I think that we’re all adults here and I think we all need to act like adults,” Moody said. “I know there are four different people up here with four different opinions and there’s nothing wrong with that, but we can still be adults about it. And we’ll move forward from here.”

On Friday, Moody said the letter only stated that Peeler was resigning as mayor and from the Board of Aldermen. When asked if his resignation was connected to the court case, Moody replied “absolutely not.”

Moody said the town had won the case.