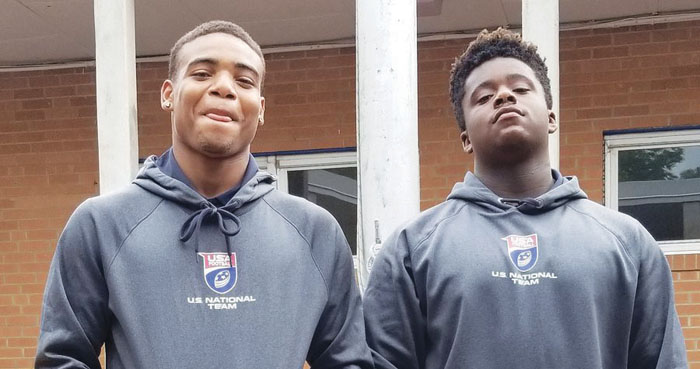 SALISBURY — Two rising freshmen at Salisbury High will head to Ohio for a taste of national competition this week.

Running back JyMikaah Wells and defensive lineman Anthony Dodd were chosen to play in a middle school All-America football game in Canton, Ohio.

Both athletes starred at Knox Middle School during the 2018-19 school year.

They’ll be competing in a special game for the nation’s elite eighth-graders in Canton, Ohio. There will also be all-star games held in Canton for the country’s top sixth-graders and seventh-graders.

Another series of middle school All-America games will be held in Frisco, Texas, in July.

The Team USA roster for these age groups will be built from the players who compete in Ohio and Texas.

‘This is a great opportunity for JyMikaah and Anthony,” Knox athletics director Darrin Turner said. “They’re going to be representing not only Knox Middle School and Salisbury, but Rowan County, North Carolina and maybe the USA.”

Turner said Wells and Dodd are special young men, on and off the field.

They were invited to a regional tryout camp held in Rock Hill, S.C., at South Pointe High, and stood out there.

Dodd was named MVP for all the defensive lineman in the camp.

“He made an impression on a lot of coaches there because when he got the award, he went and shook hands with everyone responsible,” Turner said. “These two guys aren’t just great athletes, they are respectful, well-mannered.  These are yes-sir, no-sir kids. They do very well in school and they’re never any trouble at all.”

Wells and Dodd are well-rounded athletes, not just football players.

Wells possesses great speed. I’s helped him develop into a standout in basketball and as a track and field sprinter.

“A lot of his touchdowns at Knox were kind of self-made touchdowns,” Turner said. “He’d run 15 yards to his left, and then he’d cut back and run 80 yards across the field.”

Dodd is physically powerful for his age.

Besides football, he stood out in wrestling and as a thrower in track and field. He finished seventh earlier this month in national age-group competition in the shot put. He already throws the shot more than 40 feet.

“He has a low center of gravity and he’s extremely strong,” Turner said.

Turner wasn’t trying to put any pressure on the youngsters, wasn’t trying to give local football fans unrealistic expectations, but he’s been around local sports a while, and the duo he chose to compare Wells and Dodd to was Chris Smith and K.P. Parks, a twosome that helped spark West Rowan to a legendary winning streak and state titles a decade ago.

“These are very talented, very special young men,” Turner said. “Give credit to their coaches at Knox (Jamie Phillips and Isaiah Blakeney), all their youth coaches and their families.”

Wells and Dodd will be accompanied on the trip by parents. They’ll check in on Tuesday.  There will be an intense week of practices leading up to the game at Canton’s Tom Benson Hall of Fame Stadium on Saturday, June 29.

“This is a big thing for Salisbury,” Turner said. “It’s crazy for a city the size of Salisbury to have two athletes playing in a national game. This should be great motivation for all of our young people.”

The cost for each player for the trip is roughly $900. That’s just for transportation and lodging.

Turner said businesses or individuals who would like to make a donation to help with expenses, can contact him at 704-783-6946.

All-County baseball: Carson’s Hales is Pitcher of the Year