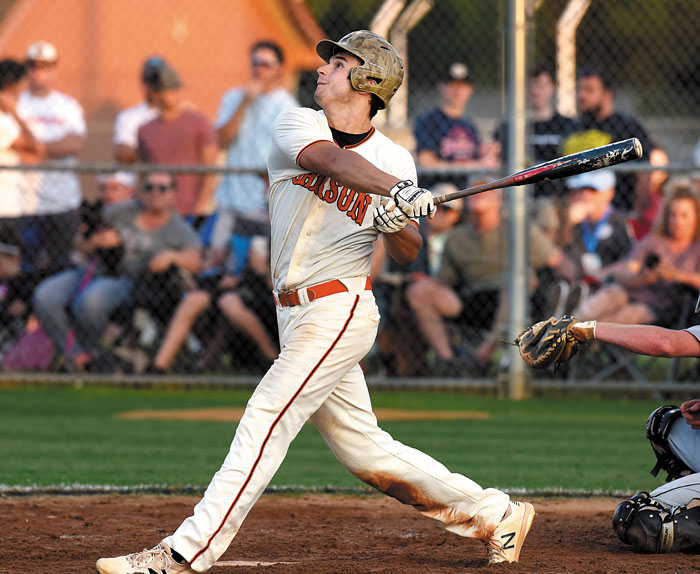 WAYNE HINSHAW FILE PHOTOS/FOR THE SALISBURY POST... Carson left fielder Luke Barringer, the all-county Player of the Year, watching one of his two home runs against North Gaston on May 17.

SALISBURY — Carson slugger Luke Barringer stands 6-foot-4 and weighs 225 pounds, so it’s not surprising that he spends some time in restaurants.

He reports that his dining-out experiences in 2019 were more fulfilling than those of 2018.

“We’d go out to eat last year and someone would recognize us as Carson baseball players and then they’d say something like, ‘Wow, Owen White is really great!'” Barringer said. “This year, we’d get recognized somewhere and people would start telling us what a good year we were having. Don’t get me wrong. Owen was a great player and he was a great teammate, but this year was really satisfying. Everyone doubted us, everyone doubted we could be any good without Owen, but we were still a very strong team. We didn’t do anything crazy. We just did whatever we had to do on that particular day to win the ballgame.”

Barringer’s mighty bat was at the heart of Carson’s historic 28-4 season, the best in school annals and one of the finest in county history. He and classmate Cole Hales were the special forces that made Carson a formidable team. While Hales is honored as the Post’s Pitcher of the Year, Barringer is the Mark Norris Memorial Award winner as the Rowan County Player of the Year.

All-conference balloting takes place at the end of the regular season. Where Barringer was a monster was in the postseason.

“Cole was really good, pitching and hitting, but as strong as his season was, I think if you asked any coach who they feared most in our lineup, who they pitched around in our lineup, that person was Luke Barringer,” Carson head coach Chris Cauble said. “Cole as pitcher of the year and Luke as player of the year, that’s the ideal scenario. Both are very deserving. Both have meant so much to our program for four years.”

Barringer has been  different for a long time.

“He made the Carson Junior Legion team when he was a seventh-grader,” Cauble said. “He was big for his age and he was pretty good, but he didn’t play a lot right away because we had older players who were a little better. But he took it in stride and came to every practice and looked at each practice as a chance to get better. Even then, you could see he had the work ethic to match his talent. He never coasted on his size and strength.”

As a varsity sophomore, Barringer batted .297 with two homers and 16 RBIs.

As a junior, he batted a modest .253, but he paced Carson with six homers and 25 RBIs and made the all-county team.

In the summer following his junior season, he made an impact with the Rowan County American Legion team, forcing his way into the lineup and producing five homers and 24 RBIs.

He signed with Catawba back in the fall, but he didn’t let up.  He knew it was imperative that he take another leap forward as a senior if  Carson was going to defend its North Piedmont Conference title after graduating White, the state player of the year, plus four more key players.

“Cole Hales and I worked all winter, hitting and lifting weights,” Barringer said. “I had done pretty well as a junior, but I wanted to do a lot more. I wanted to be better, and I knew the team was counting on me to be better. We all worked really hard for it, and the reward was championships.”

Barringer had a good year from start to finish, but where he separated himself from the rest of the county was the stretch run. It helped him immensely that Carson played seven playoff games. A lot of teams in the county played 24 games. Carson played 32.

Carson won the NPC Tournament. In the two games the Cougars played in that event, Barringer went 5-for-7 with two home runs.

In Carson’s seven playoff games, he accumulated three homers and seven RBIs. He launched five of his seven homers in the postseason, including two in one game. That was a rare feat at Carson’s field. Prior to Barringer, no one in Carson history had swatted double-digit homers in their career. Barringer socked 15 varsity homers.

“It’s not easy at Carson,” Barringer said. “That field is a graveyard for homers.”

When the postseason dust settled , Barringer batted .330 and led the county in homers (7), doubles (13), runs scored (38) and RBIs (37). He broke Carson’s single-season records for homers, runs and RBIs and tied White’s record for doubles.

He was a complete package, a strong-armed left fielder who covered a lot of ground on defense and went 16-for-16 on stolen bases.

“He’s a gentle giant, but when he’s hot, he can just carry you, and  you’ll see that with the Rowan Legion team and with Catawba,” Cauble said. “He hits the ball very hard, but he also has dedicated  himself in the last year to being a great overall player. He improved his outfield play as a senior and he made a smooth transition as far as becoming a leader for the first time. He does things the right way, and when you do, it’s pretty easy to lead.”

Barringer has received  numerous pats on the back and accolades during a magical season, but his work ethic has never wavered, and he’s still humble. That’s why coaches think he could become a serious force at Catawba in the years to come.

“I’ve been fortunate to be blessed with two things,” Barringer said.  “A big frame and the desire to be really good.”

Barringer will receive the Mark Norris Memorial Award, which was first presented by the Norris family in 1978.

Mark Norris was an athlete at Salisbury High, a guard on the football team and a star catcher on the baseball team. He captained the 1975 and 1976 baseball Hornets.

He was a sophomore at UNC Pembroke in 1977  when he was killed in an auto accident in Rowan County.

This award has kept his memory strong with Rowan baseball fans for more than four decades.

It was originally presented to the Salisbury High team MVP, but in 1983, it evolved into the Post’s player of the year award for the entire county.