High school baseball: Cauble coach of the year for the 6th time 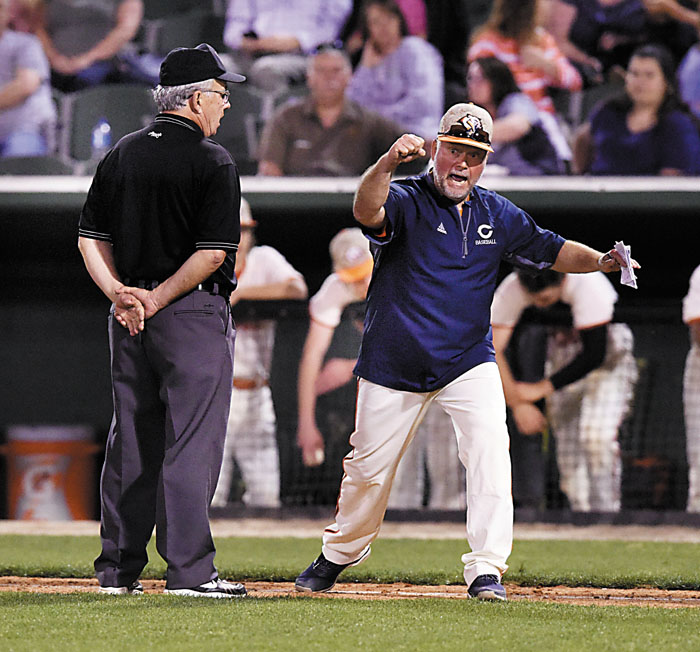 Wayne Hinshaw FILE PHOTO/for the Salisbury Post ... Carson’s Chris Cauble, right, the Post’s Rowan County Coach of the Year, demonstrates the passion that led the Cougars to a 28-4 record in 2019, reaching the state 3A final four.

CHINA GROVE — The goal of all outstanding coaches isn’t to have occasional great teams, it’s to have a program.

Carson head coach Chris Cauble has a great program. If there was any remaining doubt, the 2019 baseball season proved it.

Carson lost the Gatorade state player of the year (Owen White) and a Division I left-hander (Maddux Holshouser) from its 24-6 2018 team — and promptly went 28-4. Carson not only defended its North Piedmont Conference championship, it made the longest playoff push in  school  history, coming within one win of the 3A state championship series.

“There was a whole lot less pressure this year, lower expectations outside of our program this year, so it really was a lot of fun,” Cauble said. “To win 28 games with a group of guys that not a lot of people thought could do anything close to that, that was gratifying and satisfying. Twenty-eight wins? That’s a pretty good year.”

Those first two awards came during his seven-season tenure at West Rowan (2000-06). He’s been head coach at Carson  since the school opened. Carson made its baseball debut in the spring of 2007 with a hodge-podge of players who had been at other county schools. It was sort of like a MLB expansion team, but Cauble guided that bunch to the state playoffs.

Carson barely missed the state playoffs in 2008, but by then Cauble’s program was on solid ground. The Cougars have been part of the postseason bracket every year since then.

Besides Maddux Holshouser and White, a second-round draft pick who was a sensational hitter and shortstop as well as hurler, Carson subtracted No. 3 pitcher Cameron Prugh and starting outfielders Clayton Gilmore and Brycen Holshouser from the 2018 squad.

“We started talking about how different it was going to be way back in the fall,” Cauble said. “We knew we’d have to play even better defense than we had in the past and we knew the guys we had coming back would have to hit a little more.”

While Carson’s pitching staff appeared to be a black hole, Cauble knew things weren’t nearly as bleak as they looked.

“I’m sure that outside the program, it looked our pitching was completely depleted because we’d lost our top three arms,” Cauble said. “But we knew from Junior Legion and from fall ball what Cole Hales could do. We believed in Deacon Wike and we could see the progress he was making. And we had guys like Aaron Misenheimer and Logan Rogers. We knew they could give us some quality innings.”

Carson lost on opening day of the 2019 season at Davie County. Hales shut out Davie for three innings, and it was 1-0 game going to the fifth, but that’s when the Cougars unraveled. They lost 5-1 and had as many errors (3) as hits.

“I didn’t know how our psyche would be after that first game, but our guys were upbeat,” Cauble said. “Davie pitched (East Carolina signee) Carson Whisenhunt. We knew we probably weren’t going to see anyone better than him all year, but we’d stayed in that ballgame a long time and had a chance to win it.”

Carson beat Mount Pleasant twice for its first two wins, with the second one going nine innings. After county triumphs against South Rowan, North Rowan and Salisbury, Carson was 5-1 and ready to start NPC play. Hales shut out North Iredell in the Cougars’ NPC opener. Then, three days later, Wike shut out North Iredell. Carson’s 1-2 punch was in place, and except for one shaky start by Wike against his former East Rowan teammates, Hales and Wike got it done in every league game.

“I remember joking with Deacon Wike’s father before the season that we were going to need 10 wins from Deacon,” Cauble said. “Well, he almost did it. He got nine.”

Together, Hales and Wike won 20 games. That was one more win than White and Holshouser combined for in 2018.

On March 26, Hales squared off with East’s young ace Jake Hunter in what would be the pivotal game of the year in the NPC. Carson prevailed 2-1 and was headed to a repeat regular-season title. Carson added its fifth conference tournament title.

The one-and-done baseball state playoffs are a hard road. Top-seeded Carson survived four rounds to get to the regional championship series against Marvin Ridge. Carson won Game 1 of a best-of-three series behind Hales, but then lost back-to-back struggles by a single run.

An opposing coach told Cauble late in the season that he had the worst 25-win team he’d ever seen. Cauble, who was assisted by Daniel Pinyan, Brett Mulkey, JC Alexander, Rob Hales and Chris Sherrill, took that as a compliment, not an insult.

“I know exactly what he meant, but this team did the little things extremely well, and that’s why we won so many close games,” Cauble said. “We might get out-hit 10 to 5, but we’d still find a way to score more runs. This was not the most talented team I’ve ever had,  but we had a chemistry and unity that was hard to beat. We also had great fans and great parents. That helped a lot.”

“The saying goes that good teams are led by coaches and great teams are led by players,” Cauble said. “We got some unbelievable leadership from our seniors. Most of the time they said what needed to be said before I could say it. Most of this season, I just kind of rode the ride myself.”

And what a ride it was.