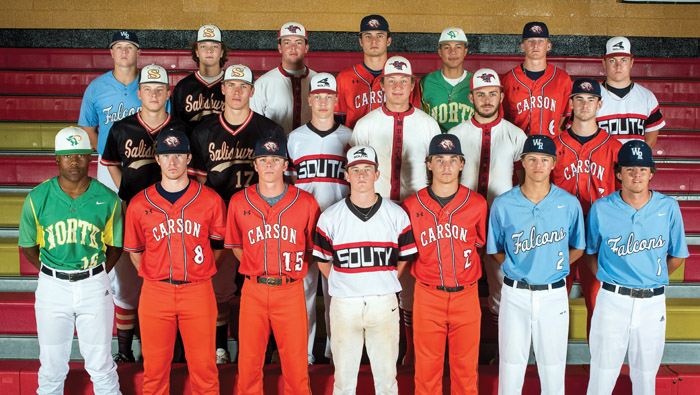 Luke Barringer, Carson, Sr. OF — Catawba signee led the county in doubles, homers, runs and RBIs despite being walked 22 times. His prodigious power earned him the Rowan County Player of the Year honor.

Jake Hunter, East, So. P/2B — North Piedmont Conference Pitcher of the Year. Hunter was 6-1 on the mound and had the county’s lowest ERA  (0.32) and most strikeouts (102). Offensively, he didn’t hit for a high average, but he was clutch, driving in 19 runs.

Bo Rusher, Salisbury Sr. C/P — Gardner-Webb signee was a dependable, two-way player for the Hornets. He hit .380 with five homers and 21 RBIs. On the mound, he contributed four wins and a save.

Wayne Mize, East Jr. OF — Missed early games with an injury, but he was one of the county’s toughest hitters once he got healthy. He batted .329 with three homers and 22 RBIs.

Deacon Wike, Carson, Sr. P/1B — Catawba signee went 9-2 with a 1.41  in a breakout season on the mound. The only pitcher in the county with more wins was his teammate Hales.

Jack Fisher, Salisbury Sr. P/1B — UNC Wilmington signee struck out almost two batters per inning and was runner-up for Central Carolina Conference Pitcher of the Year. He won three games and posted an ERA of 0.88. He also helped offensively, batting .293.

Garrett Alewine, Carson, Sr. C — With 14 walks and 12 HBPS, he was able to post a .500 on-base-percentage. Batted .329 and his work behind the plate was a huge factor in the success of Carson’s pitchers.

Zeb Burns, Carson, Jr. SS — It was a tall order following Owen White at shortstop for the Cougars, but he made a lot of plays, while batting .340 with 20 RBIs and 14 steals.

JT Fecteau, West, So. C — Young catcher led the Falcons with 21 RBIs and was strong defensively.