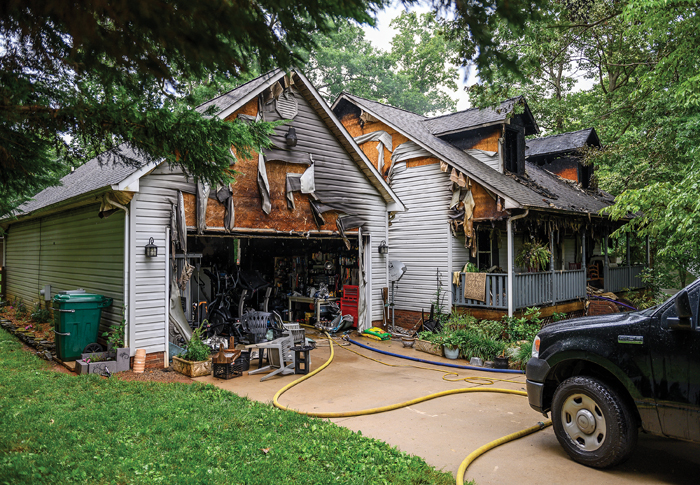 LOCKE TOWNSHIP — A three-alarm fire swept through a home in the Spring Valley subdivision Saturday afternoon and led to what fire officials think is a total loss.

The fire occurred at roughly 3:15 p.m. at 1050 Spring Valley Lane. The large subdivision of homes is located off Miller Road.

Locke Fire Department Chief Rusty Alexander said a male owner of the home received minor burns, but did not require hospital treatment. The owner, who was working in his attached garage, smelled smoke coming from the house and moved to investigate.

He may have received his burns in getting a cat from inside the home.

“He was definitely trying to get the cat out,” Alexander said.

The cat had a faint pulse when it was brought from the home, but it died later.

The fire, whose origin is being investigated, seemed to start in a bedroom, according to the chief. Firefighters relied on air packs in fighting the fire and getting it knocked down.

A water point was set up at Spring Valley Lane and Hilltop Drive.

Alexander apologized if he was leaving any department out. The fire in Spring Valley demonstrated some of the problems inherent in fighting fires in many older subdivisions.

“It causes issues,” Alexander said. “They built the roads for two cars to pass, not two firetrucks.”

Often, there is only one main road into and out of a subdivision, while interior streets dead-end into cul de sacs. And when fires happen, motorists see the smoke and drive toward it, sometimes blocking the path of responding fire equipment.

A pair of firefighters from Georgia — one from Swainsboro and one from Atlanta — stopped by the fire after hearing about it on their way home from Saturday’s annual Firetruck Festival at the N.C. Transportation Museum.