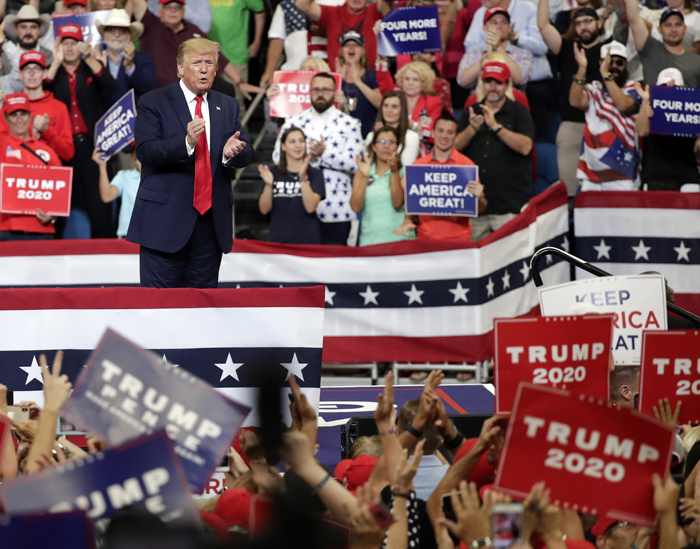 President Donald Trump greets supporters after his speech in which he formally announced his 2020 re-election bid Tuesday in Orlando, Fla. John Raoux/Associated Press

True, polls have very limited value at this stage of a presidential campaign. Yes, Democrats are far from choosing their nominee to oppose President Donald Trump. Of course, a great deal can change between now and Election Day.

Since Trump’s victory, the political balance has remained remarkably stable, and that’s both good and bad news for a president who formally launched his re-election campaign last week with a raucous rally in Florida.

On the plus side for Trump, his base shows no signs of cracking. When the president mused on Twitter recently that his supporters “would demand” he stay in office after eight years — a totally unconstitutional idea — he was accurately reflecting their unswerving devotion. “To too many people, he’s not a human being. He’s a demigod,” conservative radio host Michael Savage told The New York Times.

But the downside of this frozen landscape is equally obvious. Trump’s core base of support hovers between 35% and 37% of the electorate, and despite their fervid loyalty, that base is simply not large enough to guarantee him a second term. Trump won 46.4% of the vote in 2016, and he needs at least a 10% margin above and beyond his base — call it the 10% bonus — to have a realistic chance at a second term.

Recent polls clearly reveal the president’s peril. Two surveys in Michigan, one of three states that gave Trump his margin of victory in 2016, show Trump trailing former Vice President Joe Biden by double digits. In Pennsylvania, a Quinnipiac poll had Biden beating Trump by 11 points. A national survey conducted by Fox News put Biden ahead by a similar margin.

“Mr. Trump has never expanded his support beyond the people who elected him — and never really tried,” writes Peter Baker in the Times. “He has remained focused intently on retaining the support of his base to the exclusion of reaching out to those who have opposed him.”

A careful reading of survey data supports this analysis. An average of all national polls puts Trump’s favorable rating at 43.3%. As Baker points out, “He is the only president in the history of polling who has never once, not for a single day, earned the support of a majority of Americans surveyed by Gallup.”

Trump’s real base is actually even smaller. In 2016, only 38% of voters told exit polls he was qualified to be president, 35% said he had the proper temperament, and 33% described him as honest and trustworthy. Those responses average out to 35.3% — the loyalists who truly believe in him.

In the latest NBC/Wall Street Journal poll, which asks voters to rate their feelings about public figures, 23% said they were “enthusiastic” about Trump, and 14% called themselves “comfortable” with the president. The two answers come to 37%, almost exactly the same number that strongly supported Trump more than 31 months ago.

The president enters the race with many strengths. The unemployment rate of 3.6% in May was the lowest in 50 years, and in the latest CNN poll, 56% approved of his economic policies, a new high. Trump, who never really stopped campaigning, enjoys a huge lead over the Democrats in building a national organization and raising money.

Democrats seem to be lurching leftward on issues like abortion and impeachment, and while those policies are highly popular in liberal coastal enclaves, they could pose a real danger to the national ticket in more moderate precincts of the Midwest.

Above all, the Democrats are far from producing a candidate who can generate the sort of energy and excitement that powered the campaigns of Barack Obama and Bill Clinton, the only successful Democrats in more than 40 years. In the NBC/Wall Street Journal poll, only 13% describe themselves as “enthusiastic” about Biden, a clear warning that the leading Democrat has some serious flaws.

For all the turmoil generated by the Trump presidency, not much has changed politically since his election. His base remains just about the same. He won in 2016 because about 1 in 10 voters who were not part of that base, and who had serious doubts about his character and qualifications, disliked Hillary Clinton enough to vote for him anyway.

Can Trump win over that 10% again? The election could well hinge on the answer.

David Freeze: A shorter day allows for time to…