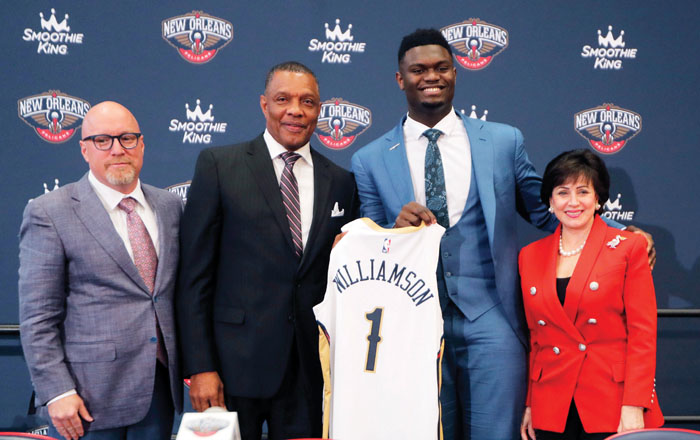 By BRETT MARTEL AP Sports Writer
METAIRIE, La. (AP) — Zion Williamson and his family were met with applause and traditional New Orleans jazz as they walked into the Pelicans’ headquarters.
The practice gym was filled with team employees and executives eager to welcome the player who has infused the franchise with so much more promise than it appeared to have when six-time All-Star Anthony Davis requested a trade five months ago.
Williamson, who was in New York a night earlier when the Pelicans made him the NBA’s top overall draft choice, smiled and looked relaxed in his blue suit and white designer sneakers. When the music was turned down and it was time for Williamson to address the gathering, he spoke with an easy manor and kept his comments short and simple. He promised maximum effort and flexibility, but stopped short of forecasting the type of greatness for himself that so many others have predicted.
“I look at things from a realistic point of view,” Williamson began during his formal introduction to his first professional home on Friday evening. He called the praise being showered upon him “a bit much,” and reminded everyone that he is still a couple weeks short of his 19th birthday.
“I haven’t played one (NBA) game yet, so I look at it just like that,” Williamson said. “I’m just trying to contribute to the team.”
The 6-foot-7, 285-pound forward will probably do a lot more than that, given the force of nature he was in his one season at Duke. He averaged 22.6 points for the Blue Devils and was voted to the ACC’s All-Defensive Team. He also averaged 8.9 rebounds, 2.12 steals and 1.8 blocked shots.
Pelicans new executive vice president of basketball operations David Griffin has sought to temper expectations by asserting that Williamson is “not the savior” of the small market franchise that was won two playoff series since relocating from Charlotte in 2002. Griffin also has stated repeatedly that veteran guard Jrue Holiday is the unquestioned leader of the team — which didn’t seem to bother Williamson at all.
Williamson visited New Orleans for just a day of meetings before the draft and had dinner at renowned Uptown restaurant Commanders Palace.
This second trip is expected to span at least the weekend, and dinner at a downtown steak place was on tap Friday night, followed by his first community service event at a playground in eastern New Orleans on Saturday. His parents and siblings also have made the trip, and they were expected to help the Pelicans’ newest star look for a place to live.
Williamson said he enjoyed the televised images of fans in New Orleans celebrating wildly in a downtown street upon his selection.
“I didn’t think I deserved all that,” he said with a smile, “but it was just passion for the team.”
Even Pelicans coach Alvin Gentry and owner Gayle Benson struggled to contain their enthusiasm for Williamson’s arrival.
“To receive the No. 1 pick in the draft is a prize any sports team would covet; this one is different,” Benson said. “We could not have asked for a better player with more potential on the court. More importantly, we could not have hoped for a better person to represent and help lead our franchise into this new chapter.”
Added Gentry, “You don’t get to coach guys like this very often. When you’re lucky enough to have a generational player like that that you’re going to be able to coach, you relish just the honor of being able to coach a guy like that.”
“You have to have the talent, but you have to have people that have the character that he has. It’s going to be enjoyable to see the style of basketball that we’re going to play. He more than fits into it. It’s going to be exciting to watch.”
Williamson said it is easy for him to take such comments — and superstar treatment from fans — in stride.
“The thing that keeps me grounded is, I just always think about the times when, like, it was just me, my stepdad and a basketball on an outdoor court,” he said.
The Pelicans had the right to draft Williamson first overall after an unlikely victory in the NBA’s draft lottery last month. Before the lottery, odds were that Williamson would wind up in one of the NBA’s largest markets with the New York Knicks. Instead, he’ll be in one of the smallest. But his stepfather, Lee Anderson, said New Orleans was exactly where he was hoping his stepson would go.
“I am so thankful,” Anderson said. “I thought this city would be a great place to go, and God worked it out.”
___
More AP NBA: https://apnews.com/NBA and https://twitter.com/AP_Sports

All-County boys tennis: SHS’s Burton is Player of the…