SPENCER — When Jean McCoy’s husband went for a jog in February and never returned, she made it her mission to press for changes in how the state alerts the public and solicits help in finding missing people.

McCoy’s husband, Rick Travis, 66, is a former marathoner who usually ran the same route a few times a week. But on Feb. 11, he left home and never returned. 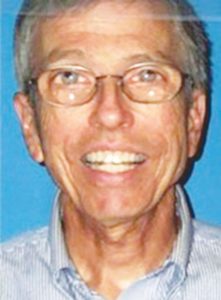 Travis typically jogged from the couple’s Long Ferry Farms subdivision, located off U.S. 29, and back again.

His trek normally took about half an hour, McCoy told the Post in March. When he didn’t return after an hour, she became worried. McCoy got in her car and drove his route, but never located him. McCoy enlisted help from neighbors and finally called law enforcement.

An alert was issued for Travis, who is 6 feet tall and weighs 157 pounds. He was wearing loose, black running pants that were cut off at the calf. He also was wearing a silver rain jacket, black gloves and dark running shoes.

The day he went missing, Travis was spotted on U.S. 29, Long Ferry Road and Interstate 85. Search teams combed the area for days but found no evidence that pointed to what happened to him.

Since Travis was spotted on the interstate, McCoy said, a description of him on a digital message board would have been helpful to alert motorists who may have seen him. Until McCoy lobbied for changes, the N.C. Department of Transportation’s digital message boards were used to post Silver and Amber alerts for missing people who were in vehicles — but not on foot.

McCoy collected thousands of signatures, submitted a letter to Gov. Roy Cooper and many other federal and state lawmakers, including state Rep. Harry Warren, R-77, and state Sen. Carl Ford, R-33. She also made phone calls.

One of those calls went to Dominic Ciaramitaro, traffic operations engineer with the DOT. He promised McCoy he’d look into the matter.

Now changes have been approved so that when a person is reported missing but no vehicle description is available, law enforcement agencies or the Center for Missing Persons can still request that a notification be posted.

The notifications will be for situations when people are missing near an interstate or major roadway, said DOT spokesman Steve Abbott.

The signs will now say where the person was last seen and ask motorists to call 511 for details. A recording will explain the circumstances, provide a description of the missing person and direct people to call *HP or 911 with tips.

During the day, Abbott said, motorists will be able to speak with someone, but after hours a recording will provide the necessary details.

He said the DOT has a limited amount of space on message boards, but they will provide a location where the person was last seen.

McCoy admits none of the changes have helped her husband, but she believes they will help in future missing-person cases. She credits many of her friends and neighbors for providing their signatures, making phone calls and championing her cause.

Anyone with information about the disappearance of Rick Travis can call 866-639-5245 or submit tips at tips.salisburyrowancrimestoppers.org .