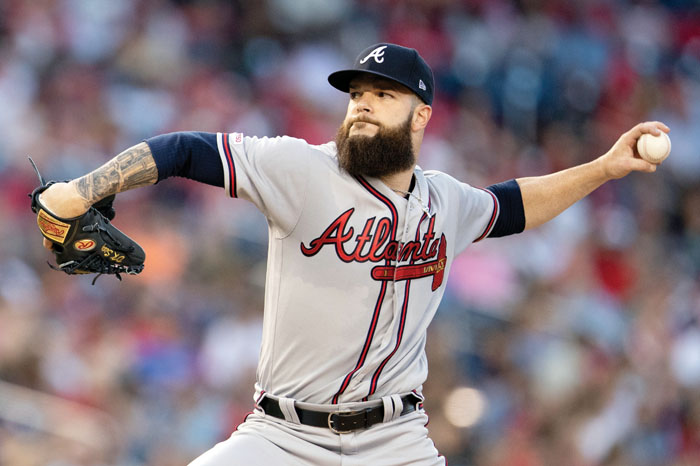 By JEFF SEIDEL Associated Press
WASHINGTON (AP) — Dallas Keuchel labored through five innings in his Atlanta debut, coughing up a 3-0 lead as the Braves lost 4-3 to the Washington Nationals on Friday night.
Keuchel signed a one-year, $13 million contract on July 7 with the NL East-leading Braves, who hope he can help lead them to the postseason. The left-hander then made two minor league starts before he was recalled Friday from Double-A Mississippi.
It was the first major league appearance for Keuchel since he started Game 3 of last year’s AL Championship Series for the Houston Astros.
Keuchel (0-1) never retired Washington in order and gave up four runs, three earned, on eight hits. He hit two batters.
The Braves had won 11 of 13 entering the game to build a cushion atop the division. The third-place Nationals have won five straight and nine of 12 to move within a game of .500 for the first time since April 24.
Atlanta led 3-0 in the fourth thanks to a two-run homer by Austin Riley and an RBI double by Freddie Freeman, who has now driven in a run in nine straight games, matching a franchise record.
In the bottom half, Victor Robles lined an RBI triple and scored on Michael A. Taylor’s squeeze bunt. Yan Gomes homered to tie it at 3-3.
Washington pushed ahead in the fifth, when Juan Soto led off with a triple and Anthony Rendon singled him home.
Stephen Strasburg (8-4) allowed three runs in six innings. With closer Sean Doolittle having worked two consecutive nights, Wander Suero allowed the first two runners to reach in the ninth before retiring the side for his first career save. Robles made a sliding catch in right field for the last out.
SUSPENSION DROPPED
Braves third baseman Josh Donaldson had his one-game suspension rescinded by Major League Baseball. He had appealed the penalty after a dust-up with Pittsburgh pitcher Joe Musgrove earlier this month. Donaldson was still fined for the incident.
Donaldson doubled and singled Friday night.
MOVES
The Nationals recalled right-hander Joe Ross from Triple-A Fresno. Washington has yet to announce a starter for Sunday, and Ross could get the call if he’s not needed in the bullpen Saturday. Washington optioned infielder Adrian Sanchez to Double-A Harrisburg.
TRAINER’S ROOM
Nationals: 1B Ryan Zimmerman (plantar fasciitis in right foot) began his rehab assignment with Double-A Harrisburg. He played five innings and went 1-for-1 with a walk. He has missed 48 games with the injury, and manager Dave Martinez said Zimmerman will work his way up to playing nine innings.
UP NEXT
Braves: Mike Foltynewicz (2-5, 5.53 ERA), who is 5-4 with a 4.02 ERA in 11 career starts against Washington, will start for Atlanta on Saturday.
Nationals: Anibal Sanchez (3-6, 3.84) is 3-0 in his last four starts.
___
More AP MLB: https://apnews.com/MLB and https://twitter.com/AP_Sports