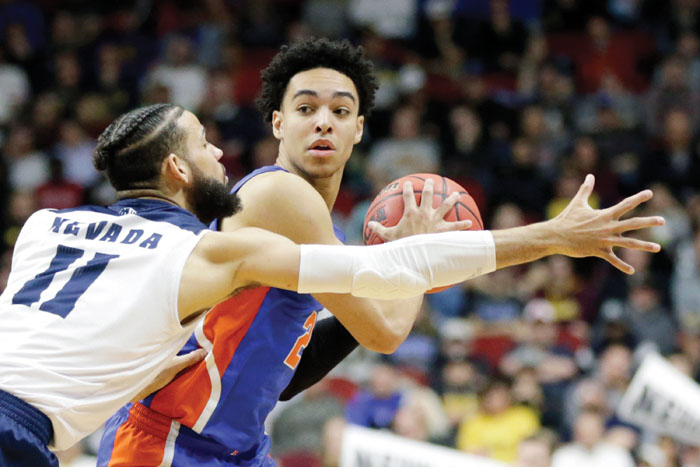 FILE - In this Thursday, March 21, 2019 file photo, Florida's Andrew Nembhard, right, is defended by Nevada's Cody Martin (11) during the second half of a first round men's college basketball game in the NCAA Tournament in Des Moines, Iowa. ... (AP Photo/Nati Harnik, File)

By STEVE REED
AP Sports Writer
CHARLOTTE (AP) — When PJ Washington entered the 2018 NBA draft a year ago, the forward quickly realized he wasn’t ready for the next level.
So he swallowed his pride, pulled his name out of the draft and headed back to Kentucky to work harder on developing his skills. His patience paid off on Thursday night as the Charlotte Hornets selected Washington with the 12th overall pick in the NBA draft.
“It definitely woke me up,” Washington said of the decision to return for his sophomore season with the Wildcats. “It definitely put some fuel on my fire and definitely helped me get to where I am today. It motivated me and pushed me every day in practice. I had that feeling in the back of my mind, and I knew what I wanted to do and I knew where I wanted to go.”
The Hornets took another forward with the first of their two second picks, selecting 6-foot-7, 200-pound Cody Martin from Nevada.
The 6-8, 230-pound Washington averaged 15.2 points and 7.6 rebounds per game last season for John Calipari’s Wildcats. Washington boasts a 7-3 wingspan and is considered a strong rebounder.
But what caught the Hornets attention was his dramatically improved 3-point shooting. He shot 42.3 percent from 3-point range last year after making just 23.8 percent as a freshman.
Hornets general manager Mitch Kupchak said it was like the “light went on” for Washington.
“He made a huge jump from his freshman to his sophomore year,” Kupchak said. “He is always in the gym and loves to work. So if he continues to make the type of jump that he made he will be a good player in this league for a long time.”
Washington said coaches worked last summer on him getting his shot off quicker.
“My freshman year every time I caught the ball and went up with it I kind of dipped the ball a little bit,” Washington said. “I tried to eliminate that and get it out in a quicker motion and a lot smoother. I got a lot of reps in and built my confidence with it. Once that happened everything went from there.”
Interestingly, Washington said the Hornets cancelled his pre-draft workout and he hadn’t heard from them since the scouting combine.
Kupchak said he views Washington as either a power forward or small forward in Charlotte.
He also said he expects him to fit in well with the Hornets young corps of players that includes Miles Bridges, Dwayne Bacon, Malik Monk and Devonte Graham.
The Hornets are growing a little long in the tooth at the power forward position with Marvin Williams still the starter, so Washington gives them a younger option if he plays the four spot. It helps that he can step out and knock down the 3, although Kupchak said now Washington will have to work hard to adjust to a longer NBA 3-point line.
He becomes the third Kentucky player on the roster, joining Michael Kidd-Gilchrist and Monk.
“He’s very versatile, a player that is very athletic and very skilled,” Kupchak said. “He can rebound and shoot the ball. And, he’s very long.”
The Hornets have two picks remaining in the second round.
Martin played two seasons at North Carolina State before transferring to Nevada. He averaged 12.1 points and 4.5 rebounds per game last season at Nevada and is considered a solid defender.
___
More AP NBA: https://apnews.com/NBA and https://twitter.com/AP_Sports

All-County boys tennis: SHS’s Burton is Player of the…