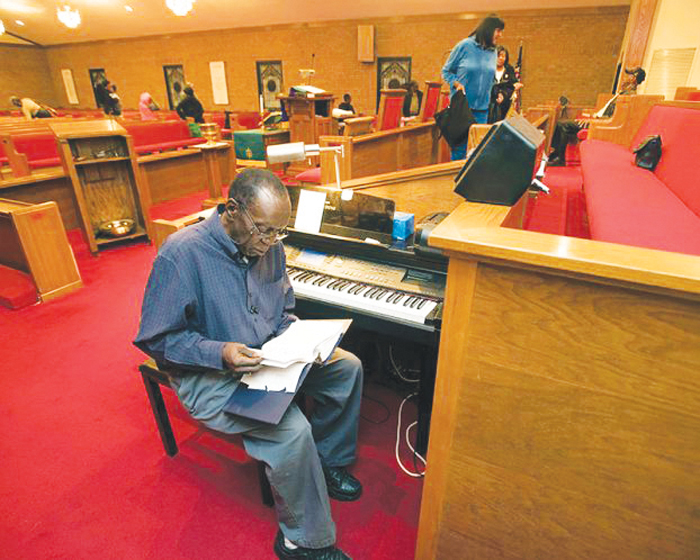 Eugene Caldwell has been playing music at Sandy Ridge AME Zion Church in Landis since the age of 12. This photo was taken in 2016. Jon C. Lakey/Salisbury Post file photo

LANDIS — On July 7, Clarence Eugene “Gene” Caldwell will play the piano and organ for the last time at Sandy Ridge AME Zion Church.

His retirement, coming just a day before his 85th birthday, will bring to an end his 73 years as a central part of music at Sandy Ridge.

At age 12, Caldwell stepped in as piano accompanist for the Sandy Ridge choirs. His commitment to the church’s music program never faltered, as he rarely missed a Sunday service until recent months.

Caldwell became the minister of music in the late 1970s.

Sandy Ridge, under the leadership of the Rev. Clarence Shuford, celebrated its 153rd church anniversary in May, meaning Caldwell served the church for nearly half of its history.

The Salisbury Post featured Caldwell in a Nov. 19, 2016, story that noted his then 70 years with the church music program. At that time, Caldwell was still directing four of the church’s seven choirs, including the senior, missionary, gospel and men’s ensembles.

A banquet honoring Caldwell was held to mark his 70th year in church music. He started learning music on an upright piano as a 6-year-old.

When his instructor, Sarah T. Yokley, left for a job in Troy, Caldwell stepped in at age 12 to play piano for the Sandy Ridge choirs, which were then under the direction of J.F. Caldwell (no relation).

A 1952 graduate of Aggrey Memorial High, Caldwell received further music training by traveling to Livingstone College on Saturdays. He learned to play the church organ and, as a young adult, became involved with gospel groups and the seven-member El Roccos, who once played on an “American Bandstand” show in Charlotte.

The El Roccos, mostly a cover band for college fraternity parties, played in several states in the South, going as far west as Lexington, Kentucky.

Caldwell took over as his church’s music director when J.F. Caldwell died. Outside church, he built a 47-year career in the sheet department at Cannon Mills Plant No. 1 in Kannapolis and made money on the side as a house painter.

Caldwell has been married to his high school sweetheart, Hattie Louise Chambers Caldwell, for 67 years.

Hughes says her father “has truly been blessed, and he is extremely grateful to our Almighty God.”