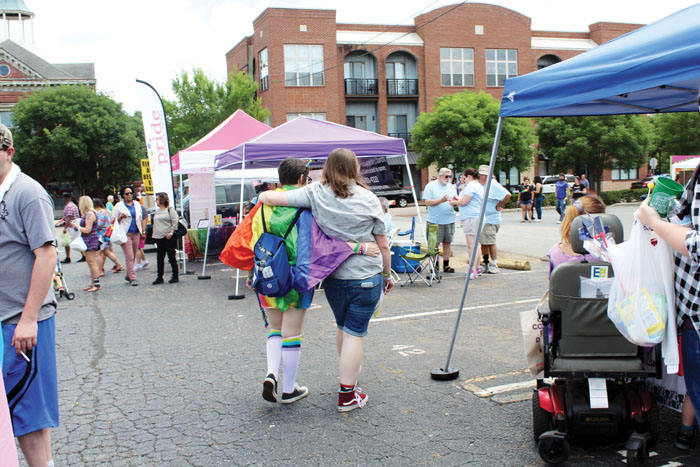 Andie Foley / Salisbury Post - Rainbows and pride flags abound at the Salisbury Pride Festival, with many of the latter worn as capes.

SALISBURY — Months before his November 1978 assassination, San Francisco’s first openly gay city supervisor Harvey Milk stood at San Francisco’s Gay Freedom Day Parade and challenged attendees to fight: for themselves, for their freedom and for their country.

“We will not win our rights by staying quietly in our closets,” he said. “We are coming out to fight the lies, the myths, the distortions.”

Hope, he said, will never be silent.

“This year is the 50th anniversary of the Stonewall riots in New York, which many see as the beginning of the ‘pride’ movement,” she said. “(The Salisbury Pride Festival) is another opportunity for people to speak out and not remain silent about the importance of equality for all.”

The festival offered this chance through providing a safe space for self expression in a family friendly atmosphere, she said. From 11 a.m. to 5 p.m., the streets will fill with food and art vendors, crafts and games all mingling with main stage performances that celebrate diversity and the LGBTQ community.

“Everyone that’s been there before just sees it as a big party,” Lane said. “It’s a celebration and a safe space. We hear so much about people not feeling safe to be themselves with their family — they can be safe here.”

This year, a record number of food and craft vendors will be in attendance, expanding the event’s footprint, she said. Because of this, a kid zone overseen by the Salisbury Parks and Recreation department will be relocated from the Mambo Grill parking lot to the City Tavern sidewalk.

“It’s a family friendly, fun day,” Lane said. “Downtown businesses love it because it brings people into downtown on a Saturday. We’ve heard from many that it’s a boost to business and that our shop owners are looking forward to it.”

And many local businesses have extended not just thoughts of appreciation but support, too. The Fish Bowl hosted a kick-off drag show Saturday, and the Pedal Factory hosted a “Rainbow Ride.”

Main stage entertainers for the festival include drag hostesses Delighted Tobehere, Jamie Monroe, Patti O’Furniture and Cierra Nichole. There will be live performances from Divided By Four, Cliff Warner, Sue McHugh and Unisex.

Amidst performances, Salisbury Pride will award this year’s Ralph Ketner Ally and Volunteer awards, and PFLAG will present scholarships to Rowan County graduates.

“Salisbury Pride Day is actually full of positivity, unity, and equality among many different groups from the Salisbury and Rowan County communities,” Lane said. “The festival features awards, scholarships, opportunities for diverse perspectives and provides a safe environment for positive visibility for members of the LGBTQ community.”

A 21-and-up party will follow the festivities at the Fish Bowl, starting at 7:30 p.m. with a performance by the band Unisex.