Saturday’s Fire Truck Festival expected to the biggest ever

Fire trucks on display outside the historic Roundhouse 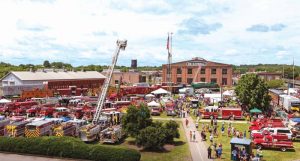 The 5th Annual Fire Truck Festival at the N.C. Transportation Museum promises to continue as the museum’s largest single day event of the year. The June 22 festival has already drawn some 90 fire truck registrations and will include appearances by the Charlotte Fire Department’s 1861 Neptune Hand Powered Pumper, special commemorative locomotives from Norfolk Southern Corporation and CSX, and the N.C. Forest Service helicopter, weather permitting.

A moving tribute to firefighters, country and rock music from Norfolk Southern’s The Lawmen, traditional bagpipe performances from the Piedmont Firefighters Pipes and Drums, the L’il Mr. and Ms. Firefighter costume contest, a fire safety obstacle course, and jaws of life demonstrations will give visitors a range of experiences.  The finale Fire Truck Parade will round out this huge day of activities.

The biggest stars of the show are the fire trucks. More than 90 trucks have pre-registered for the event, leading event organizers to believe than there will be more than 100 pieces of firefighting equipment on site June 22.  Trucks range from active department engines that are in service to antique trucks owned by individuals and collectors. Trucks are attending the event from across North Carolina, Maryland, South Carolina, and Georgia.

Likely the oldest piece of firefighting equipment on site June 22, the Charlotte Fire Department’s 1861 Neptune hand powered pumper is a truly historic addition to the event. The Civil War-era pumper was one of the earliest versions of a fire truck.  The manpower of 20 firefighters could pump water through hoses to effectively fight fires in the city.  The Neptune was Charlotte’s first acquisition of a mobile pumping fire engine. Demonstrations of the Neptune will take place at 10, 11am, 1 and 2pm.

The museum is also pleased to welcome the support of North Carolina’s biggest railroading companies to the event.  CSX’s “Spirit of Our First Responders” No. 911 locomotive, the “Spirit of Our Armed Forces” No. 1776 locomotive, and Norfolk Southern’s “Honoring First Responders” No. 911 will all be available for photos during the event.  The engines will also be part of the event’s final photo of attending fire trucks gathered around the Bob Julian Roundhouse turntable.

A pre-event Friday night photo shoot will also be offered with those three locomotives at the Bob Julian Roundhouse.  Tickets for the 8 to 10 p.m. photo shoot are $20 plus tax.

This year’s event will feature several new additions to make the day an even bigger and better experience for visitors and firefighters alike.

Children 0-12 will be able to compete in the L’il Mr. and Ms. Firefighter costume contest, held twice at the main event stage, at 11am and 1pm.  The winning children from each contest (and their parents) will ride aboard a fire truck in the finale Fire Truck Parade.

For the first time, the museum will host a Fire Truck Flea Market, with vendors selling fire truck and firefighting merchandise, along with special firefighting related items.  Vendors will be stationed inside the museum’s 90,000 square foot Back Shop, an indoor location that will make browsing those tables a break from the sunshine of the day.

This year, attending firefighters will be able to compete for bragging rights as the museum hosts a firefighters-only waterball competition. The event pits firefighters on either side of a 12 lb. waterball attached to a metal line, suspended in the air.  At the signal, each team, armed with water hoses, will try to move the ball to the other team’s side.  Competitions take place at 12:30 and 1:30pm, with a champion determined at the end of the second round of matches. The public is welcome to watch, but only certified firefighters in full turnout gear are allowed to compete.

Live music will be heard throughout the event, as the Norfolk Southern Lawmen return to the Fire Truck Festival for the third straight year. The Lawmen, the railroad’s corporate band, perform some 200 shows each year and have appeared on national television and at the Grand Ol’ Opry.

The Piedmont Firefighters Pipes and Drums are also returning for the third year, playing at set times at the event stage and performing during a special ceremony at noon that will honor the sacrifices of firefighters and celebrate the amazing work they do.