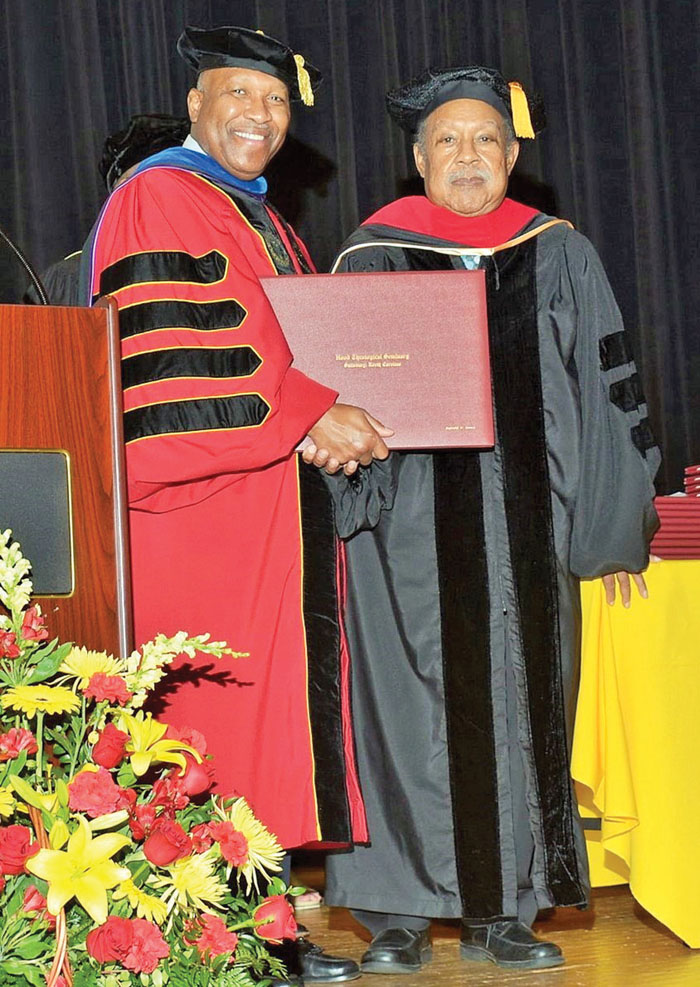 SALISBURY  — An honorary doctor of humane letters degree was conferred on Reginald Willis Brown of Salisbury by Hood Theological Seminary at the school’s commencement May 18.

Seminary President Vergel Lattimore said the decision to honor Brown was based on his dedicated service to education and distinguished contributions in the Salisbury-Rowan community.

“He has offered his wisdom and his passionate gifts in historical publications for the church and the wider community,” said Lattimore. “He has offered efficient and faithful service as secretary of the President’s Advisory Council of HTS since its formation. As a legacy friend of the seminary, he has demonstrated exceptional generosity as the founding benefactor of the endowed scholarship in honor of his parents who served the seminary with distinction for over 20 years,”

Brown is the son of the Rev. Frank Reginald Brown and Fletcher Beatrice Jones Brown. His father was a World War II Army chaplain who later became the fourth elected dean of Hood Theological Seminary.

Mrs. Brown taught summer institutes in Christian music education at Hood and was an elementary teacher for the Mooresville and Salisbury city schools.

Brown grew up roaming the halls and grounds of the college and seminary and graduated from J.C. Price High School in 1962. He became a member of Alpha Phi Alpha fraternity, the tennis team, and the Livingstone College Choral Union and graduated with a bachelor of science degree in 1966.

From 1966 to 1968, he served in the Peace Corps in Ghana, West Africa, as a math and physics instructor at O’Reilly Secondary School in Accra. One of his special assignments was to assist Ambassador Franklin Williams in conducting Ball Boys’ Tennis Clinics for Ghanaian teenagers.

He served an additional two months as a coordinator for new Peace Corps volunteers receiving in-country training. Upon completion of his service, he returned to the United States and entered Teachers College at Columbia University, was initiated into Phi Delta Kappa educational fraternity, and earned his master of arts and education degrees in secondary mathematics.

Brown then served as a high school mathematics and computer lab teacher in the Hempstead Public School System on Long Island, New York, for over 25 years. He was a member of the American Federation of Teachers and the National Council of Teachers of Mathematics from 1975 to 1999.

In 1999, he retired and returned home to Salisbury. With the persuasion of his mother, Brown’s life mission shifted from mathematics to Hood seminary’s history and growth as an institution that nurtures those who answer God’s call and how its story is related to the Salisbury community.

Several articles by Brown were published in the AME Zion Quarterly Review and the Salisbury Post, including “The Nature and Structure of Sub-Saharan West African Religions Before Islamic,” “Christian and European Influences,” “Jesus Christ Our Devine Brother Ancestor,” “Why Is There a Seminary Called Hood?” and “Mary Lynch: A Sanctuary of Temperance.”

In 2008, he published a book, “Oakdale/Union Hill Cemetery, Salisbury, North Carolina: A History and Study of a Twentieth Century African American Cemetery.”

Brown is a member of Moores Chapel AME Zion Church in Salisbury and serves on the boards of Historic Salisbury Foundation and Rowan Public Library.