Maybe the United States women are as good as players’ advertise 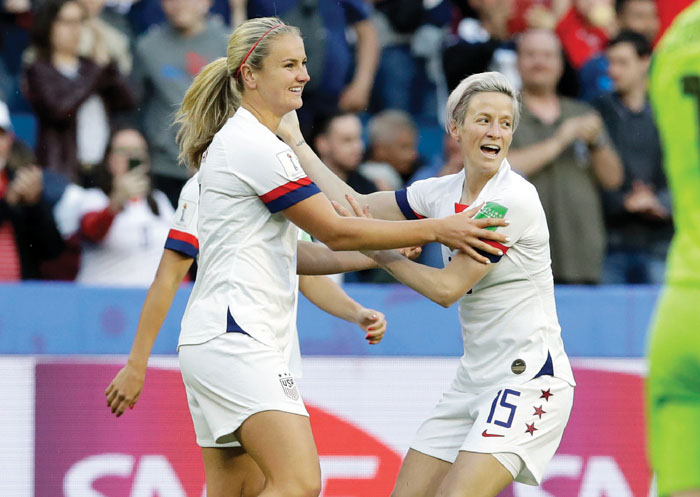 LE HAVRE, France (AP) — Maybe they are as good as they say they are.

The United States is moving through the World Cup field like sharks through the Atlantic.

“The message is that we’re on our game, that we’re building momentum, that we’ve gotten some good results, we’ve scored some good goals and we haven’t let any goals in,” defender Becky Sauerbrunn said after Thursday night’s more dominating that it appeared 2-0 win over Sweden completed a record-setting group phase. “So I hope the teams that are preparing for us are getting ready for what’s going to be a really, really tough match.”

The American Outlaws supporters in red, white and blue filled the trains north from Paris. As gulls flew overhead on a mild and breezy afternoon, they walked the streets and museums of this coastal Normandy town with their “Tour de Four” T-shirts, signifying the fourth title they hope the U.S. brings home on July 7.

They were still in their throaty start-of-game chants when Lindsey Horan scored 2 minutes, 40 seconds in, the fastest goal of the tournament. By the time Tobin Heath’s 50th-minute shot deflected off Jonna Andersson for an own goal, the Outlaws’ “We are the U.S.!” chant had been met by a playful “You are the U.S.!” response from the ever-polite Swedes at the other end of the Stade Oceane.

Now the route through the field is clear and the heat really will be on for Monday’s round of 16 match against 13th-ranked Spain at Reims — where the temperature is expected to be in the 90s. The winner meets host France or Brazil in a quarterfinal in Paris, and possible semifinal opponents include England, Australia, Norway or Cameroon.

A few numbers to digest:

Despite the relative ease of passage, coach Jill Ellis insisted complacency is not a concern.

“This team is firmly rooted on the ground,” she maintained. “These players have played this game long enough to know you have to earn every result.”

At least for three games, the Americans routed rivals in the same manner Barcelona beats up La Liga opponents. The U.S. had an 83-9 advantage in shots in the three games and had 75% possession against Thailand, 68% vs. Chile and 58% against the Swedes.

Alyssa Naeher — remember her? — had to make just four saves over the three matches, getting only infrequent tests in her first World Cup succeeding Hope Solo as the Americans’ No. 1 goalkeeper.

“I don’t think the first two games sent a message. They weren’t great teams to be honest. With that said, you have to go out and perform,” midfielder Megan Rapinoe said, laughing. “I feel like we have a big target on our back already. So I don’t know how much bigger it can get with the performance.”

Eight players produced 17 goals (plus there was an own goal), led by Alex Morgan with five, Carli Lloyd with three, and Horan, Rose Lavelle and Sam Mewis with two apiece.

“We love to just share the ball,” left back Crystal Dunn said. “I think at the end of the day the team that is going to go on and win is the team that has so many threats and doesn’t rely on one player. And I think people should know that we rotate our players. We have a strong 23, so we’re always fresh and ready to go.”

True, but the U.S. has not yet faced a moment of adversity, has not trailed, has not had to overcome a red card or a tournament-ending injury to a starter.

“We talk about from there down, everybody can kind of be the same, physically, tactically, all that kind of stuff,” Ellis said, holding a hand horizontally in front of her neck, “But from here up, sometimes that mentality piece is I think really important. So to have the players in a good place with self-belief I think makes my job easier, because certainly they are highly motivated and hungry.”

No matter how much they have entertained thus far, these players will be remembered for what happens over the next 2½ weeks, not the opening onslaught.

“This was an important game for us to figure out about ourselves,” Heath said. “Now we’re really going to see what we’re made of.”