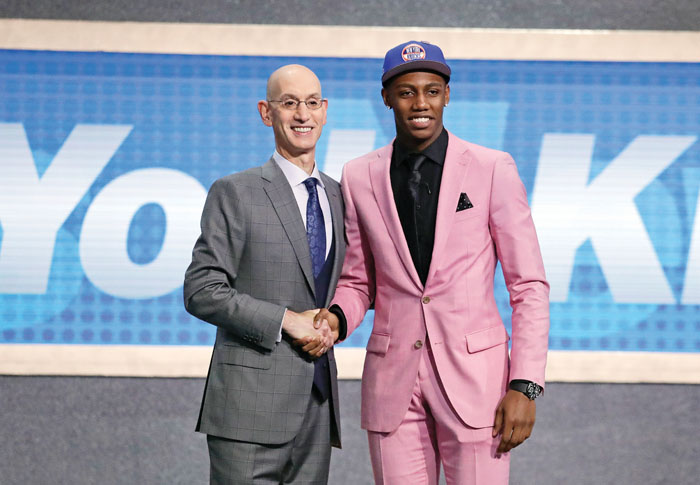 NEW YORK (AP) — It is not exactly a secret that the New York Knicks need a lot of help.

So when a player who did almost everything well in his one college season was available, the decision to use the third overall pick Thursday night in the NBA draft on Duke freshman swingman RJ Barrett was relatively stress-free for general manager Scott Perry.

“I just can’t tell you how excited we are to be able to land RJ Barrett and add him to the New York Knicks,” Perry said in a conference call with reporters a few minutes after the selection was made. “We love a lot of things about this young man starting with his tremendous competitive level; his desire to want to be great as a basketball player. He’s highly accomplished. He had a tremendous freshman season here at Duke.”

You could say that.

Barrett led the Atlantic Coast Conference in scoring at 22.8 points per game despite somewhat being overshadowed by flashier teammate Zion Williamson, the No. 1 pick by New Orleans Pelicans. Barrett finished second behind Williamson for ACC Player of the Year, and ACC Rookie of the Year. Both were named to the All-ACC First Team, and the conference’s all-freshman team.

The 6-foot-7, 202-pounder from Mississauga, Ontario, had been linked to the Knicks almost immediately after it was revealed at the draft Lottery on May 14 that New York had the third pick. However, in recent days, the Knicks had worked out Vanderbilt guard Darius Garland and North Carolina guard Coby White.

Perry revealed that the Knicks had received some offers for the third pick, but organizational decision makers decided not to stray from the player drafting and development course.

He also said the organization “did not have a lot of concern” that another team would make a trade for Memphis’ No. 2 overall pick in order to select Barrett. The Grizzlies traded Mike Conley to Utah for Jae Crowder, Kyle Korver, Grayson Allen and the No. 23 pick in the draft, a move in essence told the league Memphis was going to use the No. 2 pick on Murray State point guard Ja Morant.

“From our (intelligence) Memphis was pretty locked into their picks,” Perry said. “I didn’t think they would be moving it. …We thought being at the No. 3 position gave us the chance to draft who we felt had the most upside as a basketball player.”

Which is something a New York squad that finished a league-worst 17-65 desperately needs. Barrett theoretically provides the Knicks with another young building block along with small forward Kevin Knox and center Mitchell Robinson. The Knicks selected Knox (No. 9) and Robinson (No. 36) in 2018.

Barrett started in all 38 of Duke’s games last season, playing a team-high 35.3 minutes per game.

“The big thing is to have him become more of a consistent perimeter shooter,” Perry said. “That’s something he knows and recognizes. But he has the form and the mechanics that we felt very confident that with a lot of work and repetition with our development and coaching staff this is something that’s very attainable for him,” Perry said. “When you talk about a young man with the type of drive he brings to the table, you know he’s going to work to get better.”

Executive vice president of basketball operations John Paxson had said the Bulls would look for an upgrade at the position after Kris Dunn took a step back in his third season. He backed that up by taking the dynamic White, whose wild hairdo is as impressive as his game.

A McDonald’s All-American in high school, White made a big impact in his lone season at North Carolina. He averaged 16.1 points and 4.1 assists, helping the senior-laden Tar Heels reach the Sweet Sixteen. Chicago also has a second-round pick at No. 38 overall.

The Bulls missed the playoffs for the third time in four years and finished with one of the worst records in franchise history at 22-60 last season. They got hit hard by injuries in the second season of their rebuild, fired coach Fred Hoiberg after a 5-19 start and went 17-41 the rest of the way under Jim Boylen.

Even so, they believe they have the makings of a winning core with White joining Lauri Markkanen, Zach LaVine, Wendell Carter Jr. and Otto Porter Jr. And they saw enough progress after promoting Boylen from assistant coach to give him a contract extension in May.

This was the third straight year Chicago got the No. 7 pick. And if White produces the way Markkanen and Carter have, the Bulls will take that.

The 7-foot Markkanen has averaged 16.7 points and 8.2 rebounds since the Bulls acquired his rights along with LaVine and Dunn from Minnesota in the 2017 draft night trade with Minnesota that launched the rebuild. The 6-10 Carter showed promise last season, averaging 10.3 points and 7 rebounds in 44 games before a season-ending left thumb injury.

The Bulls figure to have about $20 million in salary cap room and could look to add veteran help on the wing and down low.

The Ex-Rays: Tampa Bay gets OK from MLB to…