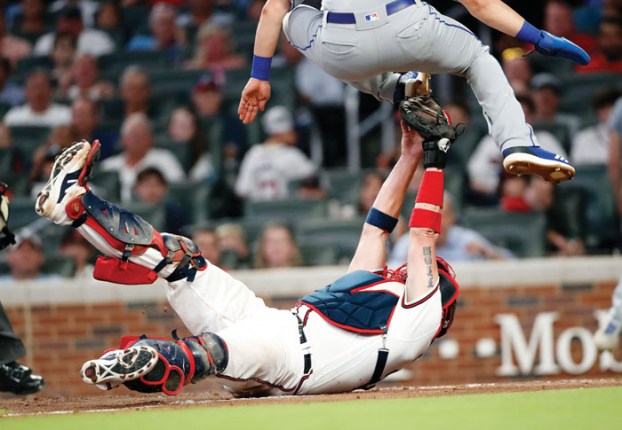 New York Mets' J.D. Davis (28) is tagged out by Atlanta Braves catcher Tyler Flowers (25) as he tries to score on a Wilson Ramos base hit in the sixth inning of a baseball game Wednesday, June 19, 2019, in Atlanta. (AP Photo/John Bazemore) 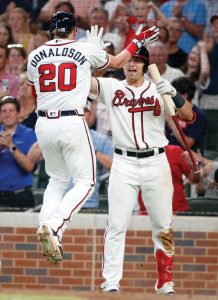 By GEORGE HENRY Associated Press
ATLANTA (AP) — The Atlanta Braves finished an 8-2 homestand with another convincing victory.
Freddie Freeman loved nearly every minute of it.
“It’s pretty much the best you can possibly do, really,” the slugger said. “We won every series, and that’s ultimately the goal.”
Josh Donaldson hit a tiebreaking, two-run homer in the sixth inning, Freeman launched an early two-run shot and the Braves beat the New York Mets 7-2 on Wednesday night.
The NL East leaders are 14-4 in June, best in the majors. They top the big leagues in runs, homers and RBIs this month and have outscored opponents 43-12 in going 5-0 in rubber games at home this season.
Freeman blooped a pop-fly single to begin the sixth inning, Atlanta’s first hit since his homer in the first off Steven Matz (5-5). Donaldson followed with his 14th home run, sixth in his last nine games, before Austin Riley doubled and scored on Ozzie Albies’ double to make it 5-2.
That chased Matz, who allowed five runs on six hits and lost for the first time in nine career starts against the Braves.
“I wasn’t executing good pitches there,” Matz said. “They were seeing me the third time through. That was a big inning for me, and they just got me.”
Max Fried (8-3) shook off a 6.10 ERA over his last eight starts, bearing down to escape trouble in his last two innings.
After striking out Pete Alonso to strand a runner at second in the fifth, Fried had runners on first and second in the sixth when right fielder Charlie Culberson picked up Wilson Ramos’ opposite-field single and threw on one bounce to catcher Tyler Flowers. J.D. Davis tried to jump over Flowers, but was tagged out before touching the plate.
Fried struck out Amed Rosario to end the sixth and strand a runner at third. The left-hander gave up two runs and eight hits with one walk and six strikeouts in six innings, winning for the first time in five starts.
“He kind of got himself back together,” Braves manager Brian Snitker said. “His breaking ball was good, his fastball command, he reached back for a little extra couple of times. It was huge getting out of the sixth inning. That was impressive right there. He took a lot of steps forward in my opinion.”
The Mets, who have dropped 13 of their last 18 on the road, led 1-0 in the first after Jeff McNeil doubled, stole third and scored on a groundout. Atlanta went up 2-1 in the bottom half on Freeman’s 21st homer.
New York tied it 2-all in the fourth when Ramos doubled and scored on Rosario’s double.
Pinch-hitter Nick Markakis’ two-run double in the eighth made it 7-2.
After losing two of three in Atlanta, the Mets fell to fourth place in the NL East and dropped 8½ games back in the division.
“Our record is what our record is,” New York manager Mickey Callaway said of his team’s 35-39 mark. “We’re concerned what we’re doing. It’s not fun to be in fourth place. No, we don’t want to be there.”
ROLLING BRAVES
Freeman has 23 RBIs in June, most in the majors, and has 14 homers in his last 32 games. … Donaldson has a season-high nine-game hitting streak with six homers during that stretch. … Atlanta has at least two homers in six straight games. … The Braves won eight games on a homestand for the first time since 2012 against Philadelphia, Miami and Houston.
TRAINER’S ROOM
Braves: LHP Sean Newcomb was placed on the seven-day concussion list and will make a rehab appearance before he’s ready to return. … CF Ender Inciarte will report to extended spring training to resume baseball activities. He has missed 33 games with a lumbar strain and will need to play several rehab games before he’s ready to return in a few weeks.
NEW ADDITION
The Mets signed second-round draft pick Josh Wolf, a high school pitcher from Texas. The 18-year-old had a 1.52 ERA and 126 strikeouts in 69 innings this season.
UP NEXT
Mets: RHP Walter Lockett will make a spot start in his New York debut Thursday at Wrigley Field opposite Cubs RHP Tyler Chatwood. Lockett went 0-1 with a 3.28 ERA in three starts and one relief appearance with Triple-A Syracuse.
Braves: LHP Dallas Keuchel is set to make his 2019 debut Friday in Washington against RHP Stephen Strasburg. Keuchel went 12-11 with a 3.74 ERA in 34 starts last year for Houston.
___
For more AP baseball coverage: https://apnews.com/MLB and https://twitter.com/AP_Sports