All-County boys tennis: SHS’s Burton is Player of the Year 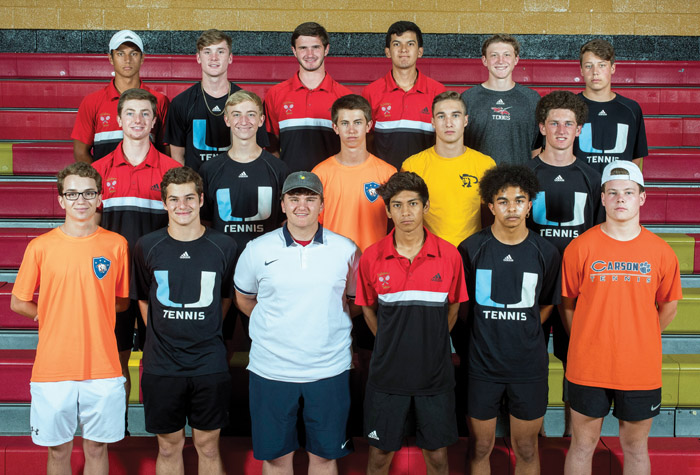 SALISBURY — There was plenty of good in Roarke Burton’s goodbye.

“It’s sort of an honor. I feel like I’ve worked really hard for this,” said Burton, the Rowan County Player of the Year. “This is kind of the last ‘congratulations’ that you get.”

Burton played an prominent role in Salisbury’s 22-1 season, a magic carpet ride that was grounded with a 5-4 loss to Clinton in the state final. As a cunning, always-thinking first-singles player, he won his first 17 matches and finished 18-3. Twice he prevailed in the playoffs — and as sure as a Bob Gibson fastball, he triumphed 6-0, 6-1 in his final appearance.

“Our season went better than expected,” said Burton, who also compiled a 15-2 mark as a doubles player. “There are a million different ways it could have gone. I’m still a little sad about the end result, but I’m proud of our team and what we accomplished. Salisbury hadn’t been to the state finals since 1993. That in itself is just amazing.”

With three seniors and Brazilian exchange student Leo Schiavianato in the starting rotation, both Burton and Salisbury coach Milton Griffith had a good feeling about this year’s team from the first day of practice.

“Really, we only lost one player from last year (Adam Drye),” Burton noted. “Then we got Leo, and that made a huge difference.”

Schiavianato became a mainstay at fourth singles, finishing 22-1 and losing only in a season-ending tiebreaker. He also teamed with Ethan McGee to win 15 of 17 doubles matches.

“Well, we thought we’d be pretty good,” said Burton, a four-year lettermen. “As we started winning matches and gaining momentum, I was like, ‘Wow, this team team might be something special.’ It’s the best team I was ever on in high school. Everyone had experience and worked hard to get better.”

That’s high praise considering Burton considers himself a swimmer first. He captured the county’s 50 and 100 freestyle events last winter and shared county Player of the Year honors. In the Central Region championships, he won the 100 free in 48.95 seconds and placed second in the 50 free.

On the academic side, Burton was one of four Salisbury High students selected for The Post’s All-County Scholars class. He hopes to continue down that path at UNC-Chapel Hill, where he’ll major in chemistry and pursue a career in the medical field.

“Hoping for med school,” he said. “And it all starts with chemistry. That’s the ground floor.”

Sandwiched into the season’s closing weeks were appearances in the regional and state individual doubles tournaments. He coupled with junior Sean Archer to reach the regional semifinals before suffering a first-round loss in the states.

“There are a lot of great players when you reach that level,” Burton said. “Players you don’t get to see locally or even in the conference. It was a challenge, but I think it made me a better player.”

And what about bidding adieu to tennis?

“Maybe club tennis at Chapel Hill,” answered Burton, Rowan’s co-Player of the Year in 2018. “I’m still enjoying this. What my coach told me — and what I told myself — was that my position was just as important as everyone else’s. Yeah, before a match we’d all encourage each other. But once I’m out there and my match is underway, I’m thinking, ‘This is on me. I’ve got to go to work.’ It’s that way for every one of us.”

Burton seems well-prepared to embrace tomorrow as it becomes today. He’s charging forward, armed with an impeccable GPA and an extra-curricular resume that includes a remarkable spring season.

“It’s bittersweet because I won’t get to play high school tennis again,” he said, a tinge of sadness in his voice. “But look what it did for me. I got to be a leader on the team. I got to help train the next generation of players to come through the program. And I’ve made lots of great friends, from Salisbury and other schools. I’m happy I got to be part of it.”

He was, as always, an integral part.