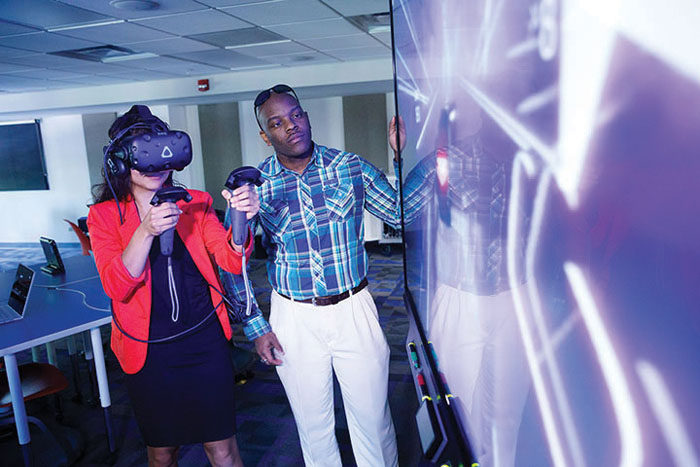 SALISBURY — Earl Givens Jr. is a techie. You can see it in his smile as he talks terms like holograms, augmented reality, Microsoft Hololen and holographic wearable computers.

All are concepts of blending the digital world with the real world, and that’s where Givens, director of the Corriher-Linn-Black Library at Catawba College, wants to take the college.

To do so, Givens is pouring a $100,000 grant from the federal Institute of Museum of Library Science and a $150,000 grant from Greg and Missy Alcorn of Salisbury into an “active learning center” and Digital Maker Center at the Catawba library.

The active learning lab, which Givens stops short of calling it a virtual reality lab, has been named the “ICE” Box: “Innovate. Collaborate. Engage.” Everything in it — desks, chairs, computer and printer tables — is on wheels to allow students to work collaboratively.

The ICE Box has nothing to do with lectures, he said: “If you are faculty and you request this space for a lecture, we will tell you no. This is where those lectures get turned into hands-on learning. This is where students are able to imagine, create, and see that creation come to life.

In the lab, theater students are able to build stage designs in 3D before they create full-scale models in the shop, allowing them to see potential problems that they wouldn’t see in a two-dimensional blueprint. In 3D, they can virtually walk around the set.

Others studying the history of theater might create a theater company instead of writing a paper about it, or write productions and create an advertising poster that they trigger to come alive on cell phones. It’s a new means of telling a story, Givens said.

Today’s students won’t stop to read a poster, Givens said: “A poster is two-dimensional. Sixty-five percent of millennials and under will actively tune it out.”

But the ICE Box will prove useful for other schools of study.

Chemistry and biology students could print molecules. Others could see how the body would function during medical situations through holograms.

Givens explains holograms using an example of repairing a kitchen sink: a hologram would allow you to see inside the sink fixtures, he said.

The technology makes Catawba one of the leaders in the field by making students more employable, helping with recruitment of new students and giving students the opportunity to master 21st-century technology skills.

One theater student at Catawba was offered a job with a California theater company because she could work with augmented reality. She ended up turning down that offer to start her own theater company.

“You can’t get a job saying ‘I wrote a history paper on theater,'” Givens said. “You can get a job if you know how to market augmented reality. This is stuff you can’t do from a book.”