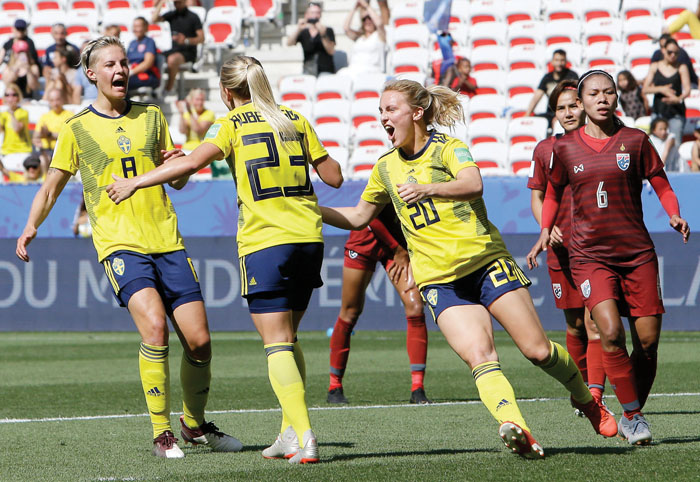 LE HAVRE, France (AP) — The United States will finally face a tough opponent in the Women’s World Cup, and it’s a team that embarrassed the Americans in their last significant tournament.

The defending champions wrap up the group stage Thursday with a match against nemesis Sweden.

Which U.S. team shows up remains to be seen: The one that pounced on Thailand in the opener and celebrated every goal in a 13-0 rout, or the more staid team that downed Chile 3-0 and muted the celebration down to a golf clap.

What’s certain is that Sweden poses the biggest challenge to the United States so far.

Three years ago at the Olympics, the Swedes got to the Americans in the quarterfinals by bunkering in on defense to thwart the normally powerful U.S. attack. After a 1-1 draw, Sweden prevailed on penalties and handed the United States its earliest exit in the tournament.

“I don’t know what the U.S. feels for this game, but It’s the first time since the Olympics that we meet in this kind of setting, so I think they do want to put us in our place,” said goalkeeper Hedvig Lindvahl. “That’s my feeling. At the same time you hear it communicated from the U.S. camp that they are going to play seven games in this tournament, so at the same time it doesn’t feel like they have all their focus on this game, to be honest.”

Both teams go into Thursday’s match with a pair of wins, and both have clinched berths in the round of 16. Ninth-ranked Sweden opened with a 2-0 victory over Chile and followed with a 5-1 win over Thailand.

The top-ranked Americans have the better goal difference and with a win or draw they would play Spain in the round of 16. That could set up a quarterfinal clash against No. 4 France in Paris, and then a meeting No. 3 England in the semifinals.

The team that finishes second in the group meets the Netherlands or Canada in the round of 16 and then could have a quarterfinal against No. 2 Germany, which would not have the home-country advantage that France’s fans bring to each match.

While the players readily admit that the Olympic loss still bothers them, the team’s aim in France is more than just revenge.

They want a fourth title.

“Going into this game we’re just focused on this new challenge. We’re not focused on past results,” said defender Crystal Dunn.

The game between the United States and ninth-ranked Sweden is one of four games that wrap up the group stage Thursday. Also in Group F, Chile and Thailand play in Rennes. Both teams are winless but have a chance to reach the next round as a third-place finisher.

The only third place teams that had wrapped up spots in the round of 16 were China and Brazil.

Already though to the knockout stage, both teams are even with two wins and the same goal differential. But the Dutch have one more goal for the tiebreaker if it comes to that.

Whichever team finishes atop Group E will head to Rennes to face Group D runner-up Japan, while second place goes to Paris to play either Sweden or the United States.

Cameroon and New Zealand, both winless in Group E, wrap up in Montpellier with a chance at a spot in the next round.

RECAPPING WEDNESDAY: Florencia Bonsegundo converted a penalty kick in the fourth minute of second-half stoppage time on her second attempt as Argentina overcame a three-goal deficit in the final 30 minutes for a 3-3 draw against Scotland. Scotland was eliminated. Argentina finished with two points and four of the six third-place teams advance. Argentina would advance if both the Cameroon-New Zealand and Thailand-Chile matches on Thursday finish in draws. Argentina was eliminated in the group stage of its first two World Cup appearances. … England remained undefeated and clinched the top spot in its group with a 2-0 victory over Japan. Ellen White scored both goals against Japan and has three so far at the tournament. It was the first time since 1982 that an England team, men or women, won all three group stage games. The Lionesses advanced to the knockout stage to face a third-place team in Valenciennes on Sunday.