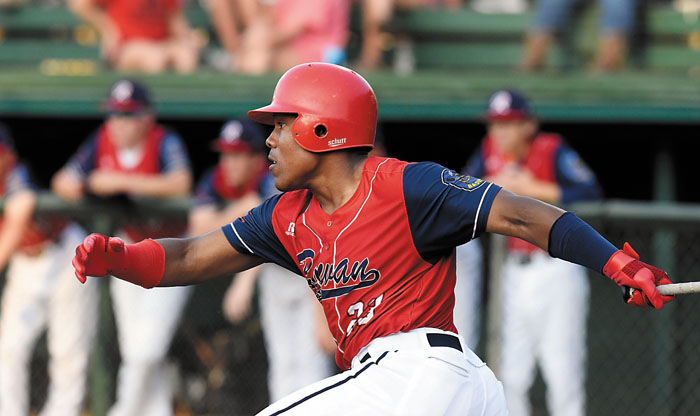 MISENHEIMER — Pitching complete games was standard practice in the days when Joe Ferebee was the head coach of Salisbury and Rowan County American teams.

Complete games have gone the way of vinyl records and 8-track tapes, but on a night when the 100-year-old Ferebee’s amazing coaching career was saluted by both  Stanly County and Rowan County at Joe Ferebee Field, Rowan left-hander Daniel Durham did his best to live up to that complete-game tradition.

Durham got 20 of the 21 outs he needed for a complete game to lead Rowan to a 6-3 comeback victory in a division game. Cole Hales relieved and got the final out as Rowan halted Stanly’s nine-game winning streak and at least temporarily maintained control of the Southern Division of Area III.

Rowan (17-5, 3-0) earned its fifth straight victory. Rowan has been challenged fiercely in recent days, but has come back to win against Mocksville, Mooresville and now Stanly (13-3, 1-1). Rowan goes to Mooresville tonight before taking Friday off.

Durham, a West Rowan graduate who is headed to Catawba, isn’t known as a strikeout pitcher, but he fanned 10 in his final high school mound outing in the 3A playoffs and struck out nine members of a tough Stanly lineup on Wednesday. Durham didn’t walk a batter until Stanly lead-off man Lukas Scott drew a pass with two outs in the seventh.

Rowan’s offense was scratchy, and Rowan didn’t managed a single run-scoring hit. Rowan had zero extra-base hits, but it pieced together enough runs to win with the aid of three errors, eight walks and several passed balls and wild pitches.

Hales scored on a wild pitch for a 1-0 Rowan lead in the first.

Stanly tied it in the second on back-to-back doubles by Brady Parker and Hunter Sells.

Cody Kidd’s RBI double keyed a two-run third inning for Stanly, putting Rowan was in a 3-1  hole. But that’s when Durham got tough. He dug in and gave his teammates a chance to come back.

CP Pyle reached base in the fifth and scored on a throwing error to cut Stanly’s lead to 3-2.

The top of the sixth was the key. Rowan had only one hit off Stanly starter Zach Grice (Mars Hill) going to the sixth, but Luke Barringer, Bo Rusher and Bryson Wagner smacked consecutive hits to open the inning. However,  instead of having the bases loaded with none out, Rowan had one out and runners at first and third after a base-running mistake.

When Zeb Burns hit a chopper to third, Barringer broke for home on contact and scored the tying run as the throw to the plate sailed wide. After Steven Smith walked to load the bases, Pyle  hit the sacrifice fly to right field that gave Rowan a 4-3 lead. Daniel Sell, pinch-running for Wagner, scored on a passed ball to make it 5-3.

After Durham retired Stanly 1-2-3 in the bottom of the sixth, Rowan added an insurance run in the seventh. Rusher walked with two out. Sell singled off the pitcher’s glove to get Rusher to third, and Rusher scored on a wild pitch.

Durham got the first two outs quickly in the seventh before walking Scott.

Hales, who had been playing third base, took the mound at that point. He got Will Dagenhart, who had three hits, for the final out on an infield popup.

All-County softball: Walton is ‘a beast with the bat’