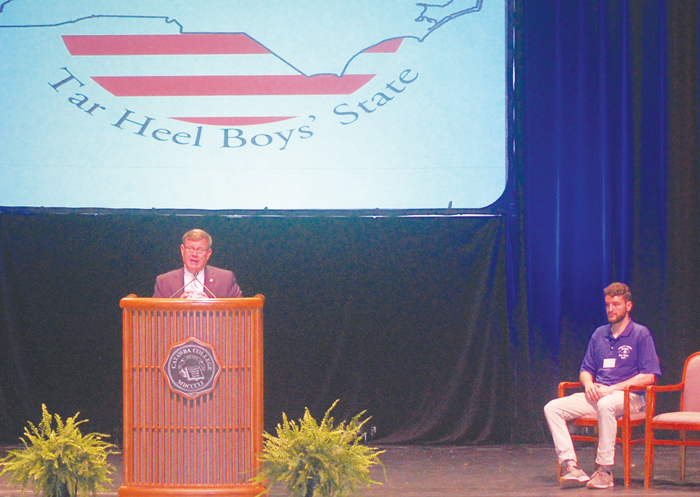 SALISBURY — Facing the 192 participants in this year’s American Legion Tar Heel Boys’ State on Tuesday, North Carolina House Speaker  Tim Moore offered the following praise: “Those of us who serve in government know what a great training ground Boys’ State is.”

The program, held at Catawba College and now in its 80th year, is a weeklong deep-dive into government functions for rising high school seniors. Throughout the week, participants develop political parties and platforms, hold elections and debates, and vote on policy using parliamentary procedure.

Just three days into this year’s session, the young men were ready to put Moore’s political training to the test during a question-and-answer period. They took turns at two microphones, asking hard-hitting questions of the state representative. Topics ranged from small business ownership to communication with constituents, though the conversation seldom ventured further than two overarching concerns: gerrymandering and funding for education.

The first question posed as the question-and-answer session began was: Do you see gerrymandering as a legitimate political process or something that should be barred?

Moore said that recent attention on gerrymandering follows a change in the laws on districting in 2015. Previously, he said, the legislature was required to draw a certain number of majority-minority districts to prevent diluting minorities’ voting strength.

He said this created districts that “look kind of crazy and go all over the place,” and so courts ruled that the process was unconstitutional.

“I agree with the court: I don’t like drawing districts like that,” Moore said. “I think it’s silly, so we backed up and said, ‘OK, the rules changed; we’re going to redraw.'”

And, said Moore, it was natural for any party in power to draw districts in a way it believed would benefit the party.

“I am very transparent and honest about that,” he said. “If there was a Democratic speaker standing in front of you, he would tell you the same thing.”

But another Boys’ State student cited upset expressed by the Republican Party in 2010, asking, “If gerrymandering was morally wrong to do when you were in the minority, how come it’s not wrong when you’re in the majority?”

Moore said that while he has previously criticized the practice of drawing districts to benefit certain political parties, he didn’t think it is morally wrong.

“I certainly don’t see it as a moral issue,” he said. “Things like the death penalty, abortion, marriage — those are some things I think are truly moral issues.”

Moore said it is a “good political issue,” adding that politically motivated maps don’t necessarily foreshadow the outcome of an election. He cited recent election results in Wake County, when Republican-drawn districts went to Democrats, as well as the 111th District election in 2002, when he won a Republican seat in a “safe” Democratic district.

“You cannot thwart what would be the will of the voters,” said Moore.

Asked what his ideal solution for a new map would be should the courts ask for new maps, Moore said he would want legislators to draw a map based purely on population as opposed to having a commission or a computer do it.

“At this point, the reason I like us drawing it is if there’s an independent commission, they’re not accountable to the voters,” he said. “If voters don’t like the map we draw, they can throw me and my buddies out of office.”

Just moments after facing inquiries about weighted redistricting, Moore was hit with another line of questioning.

“With the new budget coming for next year, what exactly is there toward teacher pay?” asked student Andrew Simple. “Because we definitely have made a lot of progress in this state, but there’s a lot of work to be done.”

Moore agreed that strides have been made in education funding but said more needs to be done. He said the state House and Senate are currently hashing out the budget for the next two years.

The House’s version of the budget proposes a 5% increase in pay over the two-year period. The Senate proposed 2%, he said.

The House also recommended reinstating master pay for teacher, offering a 10% pay increase for teachers with master’s degrees in their fields of instruction. The Senate budget does not include this provision.

“My suspicion is it will come down somewhere in the middle of those two positions,” he said. “I really want to fight hard to get the master pay.”

Another student made the question personal, asking why his school district — Charlotte-Mecklenburg — is struggling so much while legislators have such high salaries.

“If somebody signs up for this job for the money, they’re in for a rude awakening,” he said.

Addressing the first part of the question, Moore said the state funds teacher salaries and benefits at the same level across all 100 counties. It is up to individual municipalities and school boards to add supplements, he said.

He also said the state does not generally fund school facilities. These again, he said, are decisions made by individual counties and school boards.

Moore said that the House had proposed a $1.9 billion bond package in its budgeting process, with $1.5 billion to be allocated to construction at kindergarten through 12th-grade schools and $400 million for community colleges and universities.

“The Senate may consider taking the same amount of money and spending it through another method,” he said. “I suspect we’ll be negotiating that tomorrow.”