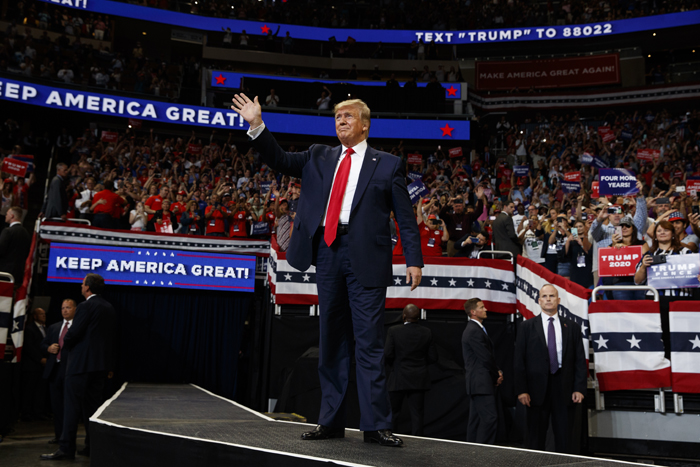 President Donald Trump arrives to speak at his re-election kickoff rally at the Amway Center in Orlando, Florida, on Tuesday. Evan Vucci/Associated Press

SALISBURY — President Donald Trump formally announced his plan to seek re-election on Tuesday, and Rowan County legislators are starting to plan for 2020 as well.

State Sen. Carl Ford, R-33, hosted a re-election kickoff last Thursday at Gary’s BBQ in China Grove as he looks ahead to serving a second term in the N.C. Senate.

“I knew I was unless something drastic happened,” Ford said of his decision to run again.

He said because the elections are close together — every two years — it’s common to keep campaign accounts open.

Rep. Harry Warren, R-76, also plans to run for re-election. Rep. Larry Pittman, R-83, will enter his last campaign as he has said he would not run for more than five full terms. He already has a challenger in Democrat Gail Young, who announced her run for the seat last week.

Rep. Julia Howard, R-77, said she is unsure if she will seek re-election and will evaluate her health and whether she feels if she will can be useful in the legislature in the future.

Warren said he has a good feeling about 2020 given the economy and amount of growth in the state.

“I feel very positive about 2020 to win back the supermajority in the House and Senate,” Warren said.

Until 2018, Republicans held a supermajority in both chambers, meaning they could override vetoes by Democratic Gov. Roy Cooper without any Democratic legislators on board.

Returning incumbents to the legislature is important for the district, Warren said.

“When you have representatives who have experience, they have institutional knowledge, which gives your district an advantage,” Warren said.

Ford said more years in office means a higher position in committees, which helps everyone at home. Ford is currently serving his first term in the Senate.

Since filing begins in December and the primary is in March 2020, the decision to run is made for you, Warren explained. He said it’s possible the legislature will be in special session or dealing with budget items as the campaign intensifies.

Howard said she feels like it’s too early to announce for re-election and is concentrating on state budget negotiations currently.

The 2020 election will have a long ballot. North Carolina voters will decide on a president, U.S. senator, U.S. representative, governor, lieutenant governor, state legislators and others.

Don Vick, chairman of the Rowan County Republican Party, said he doesn’t think any of Trump’s competition will be taken seriously. Twenty-three Democrats are running for president. William Weld, a former governor of Massachusetts who ran as vice president on the Libertarian Party ticket in 2016, is the only Republican challenger to Trump so far.

The strategy changes for legislative races depending on the number of national races. Warren said there can be a 10,000-vote difference in turnout during a midterm election. Ford said it’s easier to get people fired up about voting with more races on the ballot, but at the same time, it’s possible to get swallowed up by all the attention to other races.

Howard, who calls herself a strong Trump supporter, thinks the president will do “extremely well” in North Carolina and Republicans will be able to ride his coattails.

State Republicans are feeling recharged after their recent state convention. Michael Whatley was elected the new state chairman on June 8.

Former Chairman Robin Hayes decided not to seek re-election. The day after his announcement, Hayes was indicted on charges related to attempting to bribe the state insurance commissioner for a wealthy donor.

Vick said the party has been lackluster since Hayes stepped down. There was “an awful lot of healing and coming together at the convention,” he said.

Ford agreed, saying there seemed to be a lot of excitement after a new chairman and vice chairman were elected.

“Everyone came together and sang ‘Kumbaya,’” Ford said.

After the turmoil in the party with Hayes’ indictment and the disputed District 9 congressional election, “the Republican Party is ready to move on,” Ford said.

Howard said she is impressed with Whatley’s qualifications and is ready to wipe the slate clean.

Vick said the dinner is an opportunity to come together and support candidates that represent Rowan County in any shape or form.