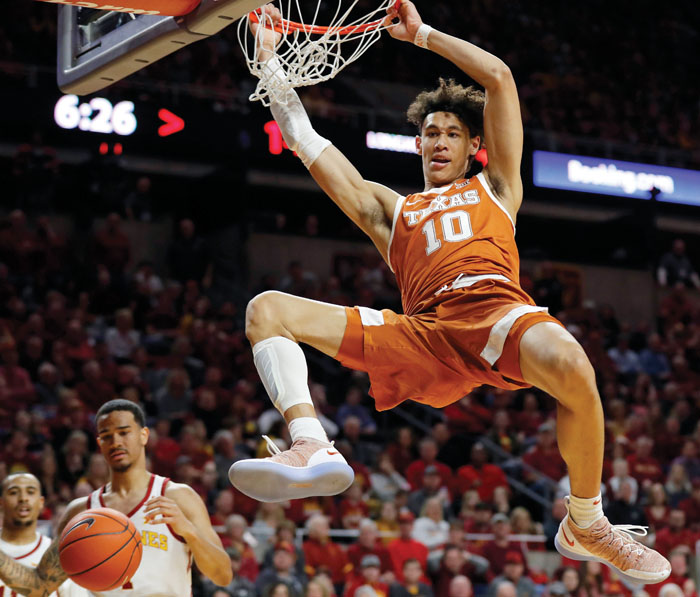 FILE - In this Feb. 2, 2019, file photo, Texas forward Jaxson Hayes (10) dunks the ball over Iowa State guard Nick Weiler-Babb, left, during the first half of an NCAA college basketball game, in Ames, Iowa. Hayes needed only a year at Texas to put himself at the front of the class of big men in the NBA draft coming Thursday, June 20, 2019. (AP Photo/Charlie Neibergall, File)

Jaxson Hayes needed only a year at Texas to put himself at the front of the class of big men in Thursday’s NBA draft.

The freshman could go late in the lottery, headlining a list of intriguing talents as the role of the big man has evolved in the NBA to embrace more flexibility and ability to roam outside the paint. That includes Bol Bol, a 7-foot-2 first-round prospect with the unique skillset to play outside.

Here’s a look at the top prospects:

There’s a lot of length and long-term potential in the Longhorns freshman.

STRENGTHS: Hayes measured nearly 7-0 with a more than 7-3 wingspan, which was among the best at the combine. That length gives him the potential to develop into a strong shot blocker after swatting 2.2 shots per game at Texas. He averaged a modest 10.0 points in a complementary role, but just turned 19 and is early in his development.

The 6-8 junior provided Gonzaga with a strong rim presence at both ends to become a first-round prospect.

STRENGTHS: Clarke put up big numbers in his last two college seasons, first as a sophomore at San Jose State (17.3 points, 8.7 rebounds) and then at Gonzaga as a transfer (16.9 points, 8.6 rebounds). He shot a national-best 68.7% while improving significantly at the line (69.4%, up from 57.3% in his last year at San Jose State). He was also a versatile defender, averaging 3.2 blocks and 1.2 steals to be named West Coast Conference defensive player of the year.

The 6-8 sophomore brings length and athleticism inside along with the ability to step out of the paint, which could have him go late in the lottery.

STRENGTHS: Washington improved in every major area last year at Kentucky. That included increases of at least 30 percent in both his scoring (15.2) and rebounding (7.5) output, along with shooting 52% from the floor and extending his range (42.3% from 3-point range, up from 23.8% as a freshman). He also has a better than 7-2 wingspan, which could help his rebounding and shot blocking translate to the NBA level.

Bol put up big numbers in a brief Oregon career with an unusual skillset and is a first-round wild card.

STRENGTHS: He has the length to play in the paint that includes a 7-7 wingspan matching the height of his late father, former NBA player Manute Bol. He averaged 21.0 points, 9.6 rebounds and 2.7 blocks, including shooting 56.1% overall and 52% from 3-point range. He can create matchup problems with his ability to shoot over defenders, particularly if they don’t close out on the perimeter.

— GOGA BITADZE: The 6-11, 250-pound center is a first-round prospect who turns 20 next month and averaged 12.1 points in his first season in the EuroLeague.

— NICOLAS CLAXTON, Georgia: The sophomore is a first-round prospect who thrived last season (13.0 points, 8.6 rebounds) while measuring at nearly 7-0 with a nearly 7-3 wingspan.

— BRUNO FERNANDO, Maryland: The sophomore is a first-round prospect who measured well (6-10 height, 7-3 wingspan) at the combine after averaging a double-double (13.6 points, 10.6 rebounds).

— DANIEL GAFFORD, Arkansas: The 6-11 sophomore is a second-round prospect who averaged 2.1 blocks for his career.

— MFIONDU KABENGELE, Florida State: The 6-10 sophomore has a 7-3 wingspan and inside-out versatility (13.2 points, 36.9% from 3-point range last season) to be a first-round prospect.

US wants win vs Swedes, even if it would…