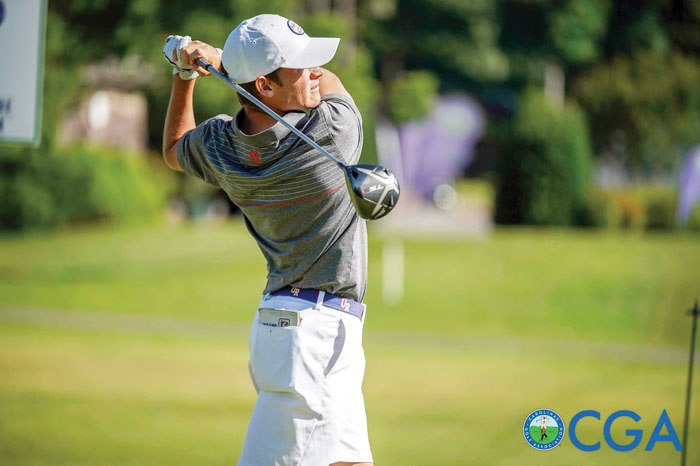 Michael Childress, of Salisbury, tees off during the North Carolina Amateur Championship at Gaston Country Club on Saturday. Childress, a sophomore at the University of Richmond, finished fifth in the tournament.

Childress had four solid rounds and saved his best for last, carding a 1-under par 69 in Sunday’s final round. He also had two even-par 70 rounds to begin the event on Thursday and Friday, and shot a 1-over 71 on Saturday.

Childress, whose home course is the Country Club of Salisbury, just finished his freshman season at the University of Richmond. In high school, in was a standout student athlete at Cannon School in Concord.

With a four-day total of 280, Childress finished seven strokes behind winner John Eades, of Charlotte, who shot 273 (71-68-64-70). Obviously, Eades’ 6-under par round on Saturday was a key to his championship. Blake Taylor, of Atkinson, and Chad Wilfong, of Charlotte, tied for second place at 278. Steven Dellinger, of Gastonia, was fourth at 279, just ahead of Childress.

On Sunday, Childress fired a 2-under 33 on the front nine, with two birdies and seven pars. He had two bogeys on the back nine, shooting a 1-over 36, still good enough for fifth place. He held off familiar foe Walker Cress, of Concord, who took sixth place at 281. Cress just finished his junior season on the golf team at James Madison University.

“It was a good week,” Childress said. “I felt like I did a really good job of managing my game and just staying patient. I’ve gone through a little bit of a tough stretch on the golf course, during the last couple of months, and haven’t been able to get as much out of myself from a scoring standpoint. “But looking back it, that stretch taught me so much about managing my game because when I wasn’t hitting it as well, and that experience taught me a lot about just staying patient.”

Part of the “tough stretch” that Childress spoke of was the last part of his freshman season. Even though he played in all of Richmond’s events during the year, Childress admits to struggling some as the long college season wound down.

“I was struggling a bit at the end,” said Childress. “It’s difficult because we’d go to a tournament, come back and qualify, go to another tournament and on and on. You have to manage your time and practice and looking back at it, I think I needed to go through a tough patch to learn those lessons and understand what being a college golfer entails.

“Of course, I know a lot of people really well who have gone through college while playing a sport, how busy it is, but you don’t realize how tough it is until you’re there,” continued Childress. “It was really a learning experience.”

This year’s event was not Childress’ first experience in the N.C. Amateur. He tied for 19th place in 2017 at River Run County Club in Davidson, actually finishing ahead of then-defending champion Nick Lyerly, also of Salisbury, who placed 47th. As an East Rowan High School student, Lyerly won the 2016 N.C. Amateur Championship at the Governor’s Club in Chapel Hill. Lyerly is now a rising junior at UNC Greensboro and key member of the Spartans’ two-time Southern Conference champions.

In the 2018 N.C. Amateur at River Landing in Wallace, N.C., Childress finished tied for 28th, this time behind Lyerly, who tied for fifth place.

Childress’ best round in his previous N.C. Amateur events was 71. This year, 71 was his highest score. “I’m pretty excited about that,” he said. “When you have a four-day tournament, there are going to be some “nines” that include some tough stretches. That’s what I’m most proud of, that I was able to manage those stretches.

“I’ve always known that I could make a run at one the bigger tournaments, but being out there at 2-under through seven holes with the course playing tough, I knew that if could keep that pace up, I might be able to make a run at the top,” Childress added. “Two bogeys coming down the stretch cost me a possible tie for second, but it excites me to know that I’m right there, and I just need to continue to put myself in those positions.”

Childress swings back into action on Wednesday, in the 113th Southern Amateur Championship sectional qualifying, hosted by the Country Club of Salisbury. But he’s looking forward to his sophomore season at Richmond as well. The Spiders’ program lost one senior and no doubt, Childress should be an integral part of the squad.

“I’m really excited about getting back to Richmond,” he said. “I know some people play really well as freshman — I know Nick (Lyerly) won his conference tournament as a freshman — but for most people, myself included, it’s a learning curve type of year. I feel fortunate that I was able to play in every event last season and I learned something from every single one. And now, I’m seeing some of that hard work paying off.

“I still feel like my ball striking and physical performance could get better, but the strategic management side of golf, I’ve learned so much in the past year,” Childress concluded. “I know that I can now compete without necessarily playing my best, which is something I wasn’t able to do before. It feels really good to be in this place with my game.”

Area Sports: Rowan at Stanly on Wednesday will be…