All-County softball: Arnott is Pitcher of the Year 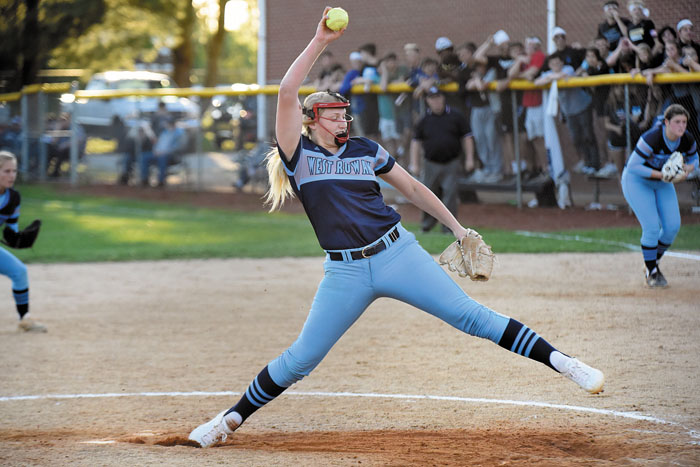 Wayne Hinshaw file/for the Salisbury Post ... West Rowan pitcher Whitley Arnott, shown during a game against Parkwood on May 14, is The Post’s Pitcher of the Year for the 2019 season.

SALISBURY — West Rowan’s Whitley Arnott struck out 42 percent of the batters she faced this season, and that stat alone made her an easy choice as the Post’s first Rowan County Pitcher of the Year for softball.

West made only 20 errors in 26 games in a championship season. West had some excellent defenders, but sometimes they didn’t have to do a whole lot more than pat Arnott on the back and tell her to keep pumping the gas. She averaged 9.3 strikeouts for a seven-inning game. For the season, her staggering strikeout total was 242, a number that ranked fifth in the state.

“She had an unbelievable season, just dominant,” said West head coach Jimmy Greene, the Post’s Rowan County Coach of the Year. “Everyone played their part for us, but Whitley, she was phenomenal.”

A rising senior who should be one of the state’s best in 2020, Arnott was expected to share West’s pitching load with Taylor Walton, but when injuries limited Walton’s time in the circle, Arnott showed she could handle the extra workload. She slung 2,337 pitches, but she looked as strong at the end of the season as she did at the start.

Arnott (21-4) has imposing size, standing 5-foot-11 and possessing a sturdy build. She averaged double-figure rebounds for West’s basketball team and she attacks softball hitters just as ferociously as she attacks the boards in West’s gym. She’s an intimidating presence when she prowls out to the circle and owns more than 500 career strikeouts.

She has velocity and movement and isn’t easy to catch. Once she recovered from a concussion, Megyn Spicer did a fine job of catching Arnott.

Arnott began her high school career at South Rowan. She accounted  for 14 wins and 286 strikeouts in two strong seasons and was instrumental in South’s 17-10 season in 2018.

Arnott transferred to West prior to her junior year.

“Our girls had faced her, so they knew what an incredible pitcher she was,” Greene said.

Arnott fit in with new teammates. It was a harmonious transition for her, and it was clear from the start she could be a difference-maker.

“I renewed old friendships and made some new ones,” Arnott said.  “Everybody welcomed me.”

Greene said it took a little while for Arnott and him to get on the same page, but they both made the necessary adjustments.

“Whitley is strong-willed and I’m strong-willed,” Greene said. “But we found our spots and we clicked together.”

Arnott struck out 10 or more batters 12 times. She struck out a season-high 17 against Davie County and fanned 16 (with no walks) in West’s second-round playoff win against Rockingham County. That victory meant a lot to a lot of people because the Falcons hadn’t made it past the second round since 2005.

In some ways, Arnott’s most impressive performance came in a game in which she was hit relatively hard. Central Cabarrus, which would finish as 3A state runner-up, scored five runs against Arnott, but she hung in there and won the ballgame in the championship game of the Civitan Tournament at Salisbury Community Park. She was a long way from 100 percent physically that night, but she still was able to pitch a complete game and persevere against a great lineup.

“On the nights when I wasn’t at my best, our defense came through and made great plays,” Arnott said.

Besides beating Central Cabarrus, West won against 4A semifinalist Mooresville. Arnott struck out nine Blue Devils and allowed only two hits in an exceptional performance.

Arnott struck out 83 in West’s 10 North Piedmont Conference games and was voted NPC Pitcher of the Year by the league’s coaches.

“We won some tournaments (North Piedmont Conference and Civitan), but the biggest thing for me was winning the conference for the season,” Arnott said. “I’d never gotten to experience something like that.”

“People forget how much we lost from our 2018 team, but we graduated three all-county players,” Greene said. “This was a brand new team, but they got along and they played for each other, and Whitley was a big part of that. She had a super year —  and she’s still got next year.”