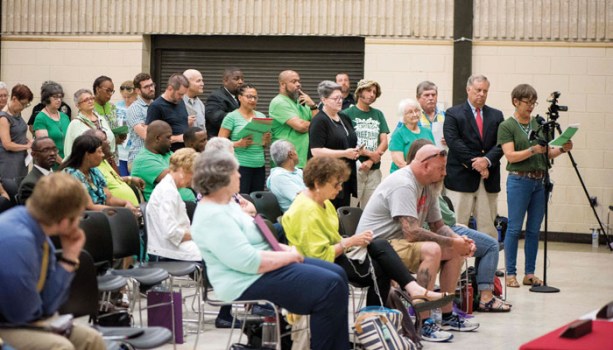 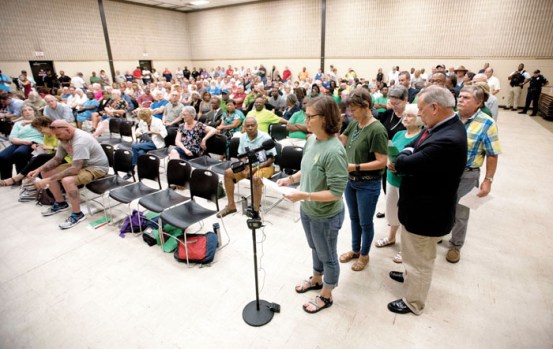 Emily Ford waits at the microphone to start the comment as a line formed up. Jon C. Lakey/Salisbury Post 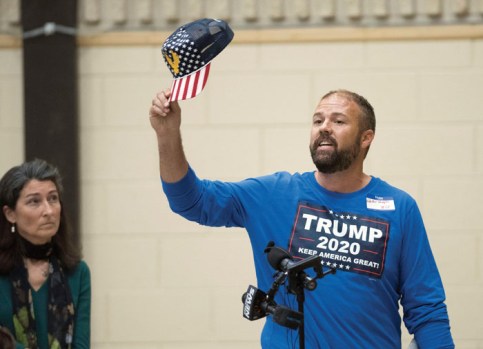 Walter Vaughn voiced support for keeping the statue where it is. Jon C. Lakey/Salisbury Post 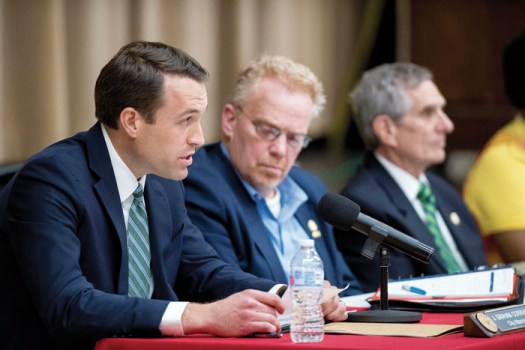 City Attorney Graham Corriher gives his legal opinion what how the city of Salisbury can approach the monument. Jon C. Lakey/Salisbury Post 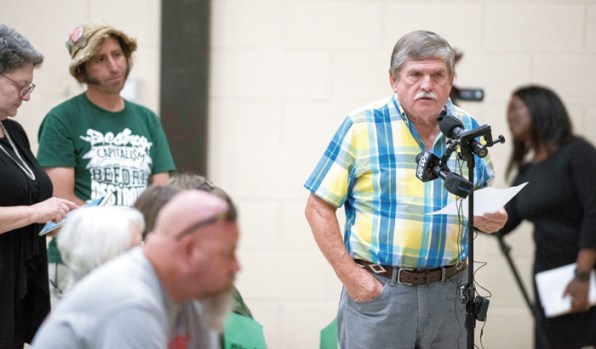 Mike Sells comments during the hearing in keeping the monument in the same location. Jon C. Lakey/Salisbury Post 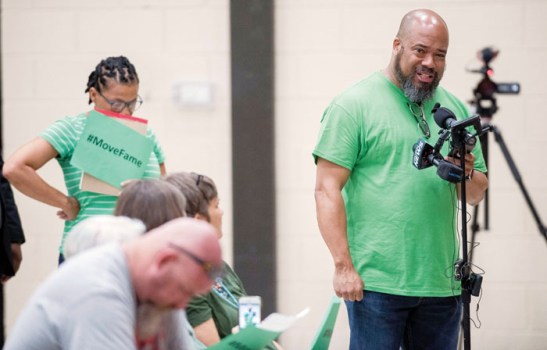 SALISBURY — One said, “Move Fame,” the next said he or she does not want the Confederate statue moved, and the nearly full room at the Salisbury Civic Center was mostly divided as the City Council heard from the public at a special meeting Monday night.

Opinions on the monument, dedicated in the early 1900s, ranged from the importance of its beauty to the viewpoint that the statue represents the suffering of black Americans and public safety concerns. Residents of Salisbury and surrounding towns spoke for two hours, with three minutes each, about their preference on the future of the Confederate monument.

No vote was taken by the City Council on Monday night.

“Fame,” which sits on the median of West Innes and Church streets, was vandalized twice in a seven-month span — in August and March. It was splattered with paint both times. There have been no arrests made. 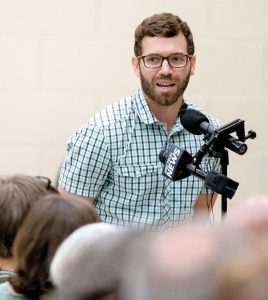 Bob Johnsen, a history teacher at Carson High School, said that history repeats itself, and the public should remember that in August the KKK was handing out fliers in Rowan County neighborhoods and, later, the monument was splattered with paint.

“These things sound like they should be dead and gone, but the past is never dead,” Johnsen said. “It’s not even past. In Salisbury, that past stares down upon us from that statue.”

Johnsen said he felt it is unsafe to bring his 7-year-old son, whom he called his shadow, to the special meeting.

Jeff and Emily Mabrito, who moved to China Grove a few years ago, spoke in favor of keeping the statue where it is. When he first visited Salisbury, Jeff said, he was attracted to its history, specifically the Bell Tower and “Fame.”

Emily Mabrito spoke after her husband about how says that the prospect of moving “Fame” made her want to cry. She said “Fame” is one of the best parts of Salisbury and that the city shouldn’t erase history. She also voiced her concerns about finding those who vandalized the statue.

Walter Vaughn, who identified himself as a conservative Republican, questioned what else would be taken away if “Fame” is moved, pulling off his hat and pointing at his “Trump 2020” shirt.

Mike Sells said he also supports “Fame” staying in its location and asked council members if police have found the vandals.

“When I hear about ‘Fame.’ I see an angel holding up a wounded soldier or a dead soldier,” Sells said. “What is racist about that?”

The monument depicts a soldier being held up by a winged muse.

Michael Kirksey said the statue represents the hate and disgust that has been perpetuated against black people.

“As far as someone losing a statue versus a person who has lost their name, their culture, their land and everything that they had, that state means nothing but the suffering that my people suffered for 400 years,” Kirksey said. “Take that thing down. It means nothing compared to what we, African-Americans, have suffered.”

Preston Wallace also spoke for the removal of the statue and for it to be done in a speedy manner to move on and deal with bigger issues.

“Move fast and let’s deal with the real issues,” Wallace said. “Everybody keeps talking about God, but God is not enslaving nobody.”

A handful of people held up “#MoveFame” signs after all speakers finished. All speakers were met with applause, regardless of whether they were for moving “Fame” or keeping on West Innes Street.

Mayor Al Heggins at one point interjected during the meeting, saying there have been no talk about the monument being destroyed.

The legality of moving “Fame” also was addressed, with City Attorney Graham Corriher talking about his legal opinion. Absent of an agreement with the property owner, Corriher said, the United Daughters of the Confederacy and the 2015 state law that prevents removing monuments permanently and places limits on cities relocating statue limits the city’s authority to relocate the monument, unless it is for public safety reasons.

Pastor Anthony Smith asked whether the community would be able to live with itself if something similar to deadly protests in Charlottesville, Virginia, happened in Salisbury. In August 2017, white supremacists protested Charlottesville’s plans to remove a statue of Robert E. Lee. A counterprotester was hit and killed by a car that plowed into the crowd.

Teresa Rowell argued that the statue is a magnet for people and viewing the statue is difficult and unsafe. She recommended it be moved so those who want to visit “Fame” could do so undisturbed.

Heggins concluded the special meeting by thanking the audience for listening to one another.

“For the council, we care,” she said. “We care deeply. That’s No. 1. Secondly, we care about preserving all history in the city. And the third thing is we care about making sure everyone is respected in the city.”

What’s next, Heggins said, will depend on the council. She said, however,, she would be leaving the meeting feeling very optimistic.