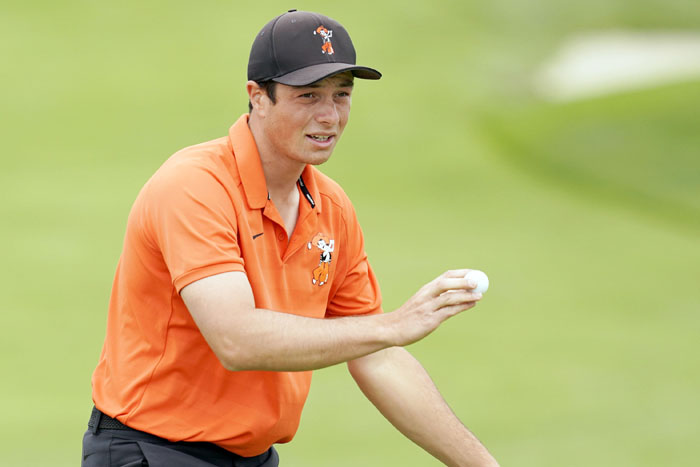 Amateur player, Viktor Hovland, of Norway, waves after his birdie putt on the sixth hole during the final round of the U.S. Open Championship golf tournament Sunday, June 16, 2019, in Pebble Beach, Calif. (AP Photo/David J. Phillip)

PEBBLE BEACH, Calif. (AP) — Viktor Hovland ended his amateur career in style.
Hovland shot a 4-under 67 in the final round of the U.S. Open at Pebble Beach on Sunday to finish the weekend at 4-under 280, breaking Jack Nicklaus’ record by two strokes for the lowest score ever for an amateur at the U.S. Open. Nicklaus set the mark in 1960 at Cherry Hills.
“It’s obviously cool to perform such a thing,” Hovland said. “And I hope that this will feed or I can feed off of this going into my professional career and do more things like this and be in contention of winning tournaments.”
The next time Hovland plays it will be for money next week at the Travelers Championship. He accomplished plenty as an amateur. He won the U.S. Amateur here at Pebble Beach last year, won a team collegiate title at Oklahoma State in 2018 and was the low amateur at the Masters in April with a score of 3 under.
Hovland became the first player to be the low amateur at the Masters and U.S. Open in the same year since Matt Kuchar did it in 1998.
The only thing that didn’t go Hovland’s way was the fact he finished in a tie for 12th place, one shot out of the top 10 and an automatic berth in next year’s U.S. Open.

BIRTHDAY BOY
Of course, losing hurts, but Phil Mickelson isn’t giving up.
He turned 49 on Sunday, and what a day it would’ve been if those serenades of “Happy Birthday” had come later in the afternoon and involved him hitting shots with a U.S. Open title on the line.
Not even close. Mickelson was an afterthought on this day. He teed off at 9:33 a.m. and shot 1-over 72 to tie for 52nd.
“I don’t know what else to say,” he said. “It’s not like I’m going to stop trying.”
Because he has won at Pebble Beach five times on the PGA Tour, and because he’s not getting any younger, many viewed this as his best chance to finally capture the lone major that has eluded him.
Long one of the most-vocal critics of the USGA, Mickelson had nothing but positives to say about this week’s course setup.
“A perfect, hard test,” he called it.
He just didn’t pass it.
And so, he’ll start focusing on Winged Foot —the site of his 2006 U.S. Open collapse— for next year, and Torrey Pines —another course where he’s had success— in 2021.
As for Pebble, well, he’ll always have good memories.
“Even though I didn’t play my best this week, it is a special place, and so fun to be a part of it,” Mickelson said.

CAP AND GOWN
Brandon Wu ended up playing in the final round of the U.S. Open and getting his college degree on the same day.
Wu missed the graduation ceremony at Stanford on Sunday after making the cut at the U.S. Open but was presented with his cap and diploma after finishing up on the 18th hole at Pebble Beach.
“There was obviously a little bit of talk about it happening, but honestly I wasn’t expecting it,” Wu said. “I wasn’t thinking about it. The crowds was yelling at me all day about graduation, so it was pretty cool to get this kind of ceremony at the end here.”
Wu finished with a 3-over 74 on Sunday and ended the tournament with a score of 1 over.

RATINGS NEWS
Fox posted the largest television audience for the third day of the U.S. Open in six years.
Fox said it averaged 4,243,000 viewers for the 10 hours of coverage on Fox. That was an increase of 12 percent over last year when the tournament was played at Shinnecock Hills on the East Coast and the biggest audience since 2013 at Merion.
Fox said the audience peaked from 5:45-6 p.m. EDT with an audience of 5,569,000 viewers, near the end of Tiger Woods’ round. The leaders didn’t finish for another four hours.
___
More AP golf: https://apnews.com/apf-Golf and https://twitter.com/AP_Sports