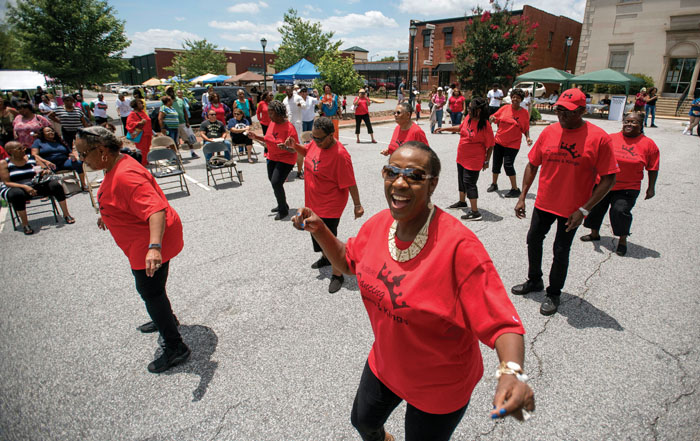 The event is a way to bring the community together, Woods added.

The Juneteenth celebration, taking place on Saturday from 11 a.m. to 7 p.m., was filled with live music, vendors and food. This is the 39th celebration of Juneteenth that the Salisbury-Rowan NAACP has put on in Salisbury, said President Gemale Black.

The celebration is a remembrance of the freeing of enslaved Americans, said Anthony Smith, political action chairman of the NAACP. And he called it the 4th of July for African-Americans because slavery lasted well after 1776, the year of America’s independence, to 1865, the year the civil war ended, he said.

Enslaved Africans had been freed under the Emancipation Proclamation two years earlier on January 1, 1863, under the direction of Abraham Lincoln, but the law was not enforced in the then Confederate states, Dixon added.

It is a part of history, Dixon said, which needs to be kept alive.

“I am apart of history,” she said.

The celebration is a way for the city to all of its ancestors and history, said Salisbury Mayor Al Heggins while attending the event.

Yolanda Byrd, a Winston-Salem State University social work professor and vendor at the Juneteenth celebration, said the event is one she feels attached to. It is hard to feel attached to the 4th of July when Africans were still enslaved in 1776, she said.

Events such as Juneteenth are important to make sure the community is inclusive, Byrd said. It is a way to appreciate diversity and learn more about history, she said.

To celebrate the event, Byrd was selling “culturally relevant” items from her online shop, Je’ Taun’s Loot, she said. This included earrings and jewelry with the year 1865 and June 19 on them, she said. It is hard to find products like this in Salisbury, she added.

The is event is a celebration of culture, said Salisbury-Rowan NAACP Religious Affairs Chair Marcus Fairley at the event. It is also a celebration of African-American struggles and a sign of hope, Fairley said.

Kevin Boss, owners of Good Finger Licking and bishop of World of Faith Ministry said he came today, as a vendor, to support the event.

It was nice to see a day where everyone was getting along, he said.

Next year’s annual Juneteenth will mark the event’s 40th anniversary.