Family celebrates father, giving them opportunities he never had 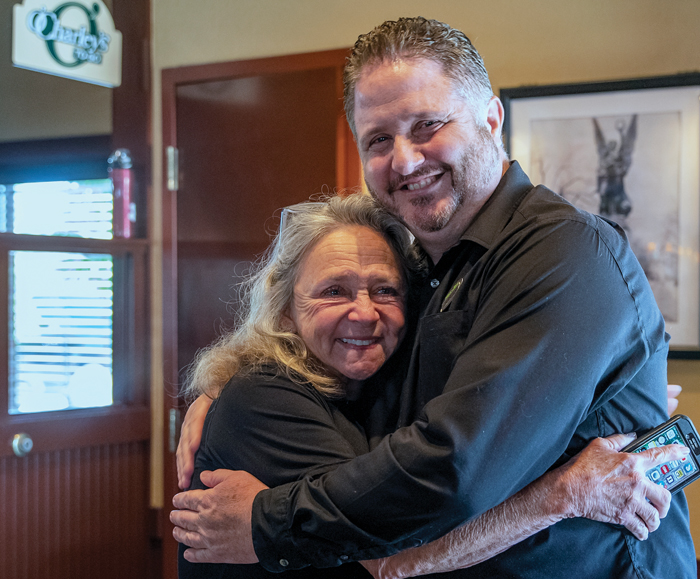 SALISBURY — For Father’s Day, one local family is celebrating their father, Darrell Kegeris, and his hard work at a restaurant across the years.

Darrell began working at O’Charley’s — an American-style food restaurant — as a server 14 years ago in the town Gulfport, Mississippi. And that was a career shift. Before that, Darrell had worked as a steward and cook on an offshore oil rig platform for Mobile Oil. He had also served in the Air Force.

But the job on the oil rig put him away from the family for 20 days at a time, Darrell said.

Darrell said he wanted to be closer to his family, spending more time with them and a job at O’Charley’s provided that.

But during the same year — 2005 — the family was affected by Hurricane Katrina. The family lost power from the storm, Darrell said, and, at the time, they were unsure of when it would be turned back on. And because of the heat, Darrell’s youngest son, Dylan, was suffering from an illness.

Darrell and his wife, Sherry, decided it was time to look elsewhere to live, he said. They chose Salisbury, in part, because Darrell’s parents lived in Gold Hill. After moving, Darrell began working at Salisbury’s O’Charley’s.

Growing up, the family’s economic situation was not always the best, said Darrell’s daughter Brandy Kegeris. But Darrell always worked hard to make sure the family got what it needed and wanted, Brandy said.

But lately, Darrell’s perseverance has occurred without the presence of his late wife, Sherry, who passed away roughly seven months ago because of organ failure.

His wife was the one to discipline the kids, Darrell said. This Father’s Day is also a day for those single moms, who are parenting alone and filling a fatherly role, he said.

Brandy, who is 22, and Darrell’s son, Josh Kegeris, who is 19, still share a special bond with their father and late mother. Starting at 16, both Brandy and Josh joined their father and mother at the local O’Charley’s to help save up for college.

Darrell said his parents never focused on education. But he wanted both of his kids to have the opportunities that he didn’t have, he said.

Both kids were accepted to the University of North Carolina at Chapel Hill, receiving a “full ride” with the Covenant Scholarship — a scholarship that aims to help low-income students graduate debt-free. Dylan, 15, is currently attending Rowan County Early College — where both of his siblings had attended just a few years prior.

Both Brandy, Dylan and Josh credited their father’s involvement and attention to their school work to their current success.

Through his dad’s presence in his professional and personal life, Josh said, he was able to receive the Covenant Scholarship, attend Carolina and graduate seventh in his class at Rowan County Early College.

Brandy shared a similar story, saying her dad was there to make sure that she took the SAT more than once — instilling a mindset to succeed.

And Dylan said it was his father’s perseverance, pushing him to focus on grades, that made him a straight-A student.

Asked about what they have planned for Father’s Day, Brandy and Josh said it will be a surprise, but it will be something that allows the family to come together.

Still, this year will be different, Brandy said. This with the first Father’s Day without her, she said.

In closing words, Darrell said, “I want the kids to find happiness and stay close to the family.”

Darrell can still be found at O’Charley’s, where customers ask for him by name.