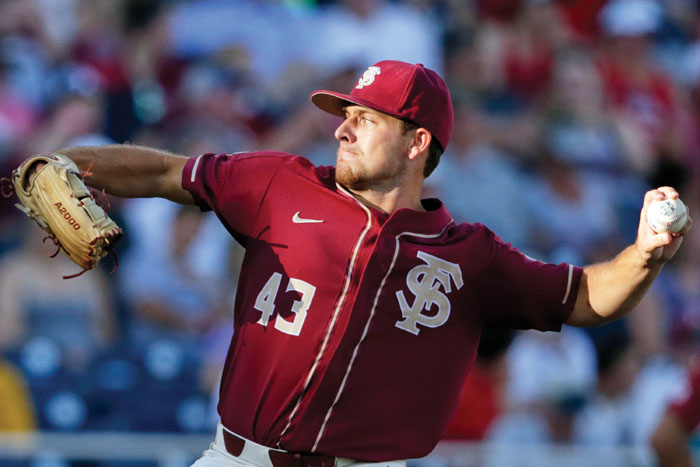 By ERIC OLSON AP Sports Writer
OMAHA, Neb. (AP) — Drew Parrish called it the best performance of his career. It came at the right time and place for Florida State, which is attempting to send its coach and all-time NCAA wins leader into retirement with his first national championship.
Parrish limited Arkansas to five hits in eight innings and J.C. Flowers scored on a sacrifice fly in the ninth before closing it out on the mound, giving the Seminoles a 1-0 win in the first game of Mike Martin’s 17th College World Series appearance on Saturday night.
FSU had lost five CWS openers since last winning one in 1999. Of the past 38 national champions, 34 won their first game in Omaha.
The win was the sixth straight in the NCAA Tournament for Florida State (42-21).
“We don’t know what’s going to happen,” Martin said. “I can’t say we’re in the driver’s seat. This field is strong, this field is impressive. So this tournament is a long way from being in anybody’s hands.”
Parrish and Arkansas starter Isaiah Campbell engaged in a classic pitcher’s duel sprinkled with outstanding defensive plays, neither team budging until the Seminoles broke through against reliever Casey Scroggins in the last inning.
“It’s fun when you’re battling, putting up zeroes,” Campbell said. “It’s the biggest stage in baseball and to do it in front of 26,000 fans, it’s special. We gave the fans a treat.”
No. 5 national seed Arkansas (46-18), which scored 30 runs in its three super regional games against Mississippi, including 14 Monday, was shut out for only the second time this season.
“I had to match his intensity and keep my team in the game,” Parrish said. “We scratched out a run in the end. Lights out performance on both sides, and I’m glad we came out on top.”
Parrish was solid in his only previous CWS, a no-decision in a win over Cal State Fullerton in 2017. He was better than that against the Razorbacks, who are back in Omaha after losing the national championship a year ago when they failed to catch a foul ball on a play that would have given them a two-game sweep over Oregon State in the finals.
“Being in a situation like it was tonight, with the great fan support from both sides, probably the best game of my career,” Parrish said.
Parrish (8-5) hadn’t made it past the fifth inning in his previous four starts. He was masterful against the Razorbacks, striking out nine and walking two and getting out of trouble every time he encountered any.
He was at his best in the eighth, when Christian Franklin doubled into the right-field corner leading off and was on third after a groundout. Still throwing 93 mph after crossing the 100-pitch threshold, Parrish struck out Casey Martin and Mike Goodheart with a pair of wicked changeups.
In the top of the ninth, Scroggins (3-1) hit Flowers with a pitch, and there were two men on base when shortstop Casey Martin scooped up Carter Smith’s chopper up the middle and tried to tag Flowers as he slid into second. The ball popped loose and Martin’s glove fell off, with Martin shaking his left hand in pain after the play.
Matt Cronin came on, and Matheu Nelson moved the runners over with a sacrifice. Flowers scored when right fielder Heston Kjerstad’s throw home on Nander De Sedas’ shallow sacrifice fly was up the third-base line. The play stood after Arkansas asked for a video review to see if Flowers left third base early.
Flowers made a great play in the second inning when he robbed Kjerstad of extra bases with a catch against the wall in center field. As their closer, he came on in the bottom of the ninth to earn his 13th save, but not without a little drama.
Dominic Fletcher grounded to shortstop Mike Salvatore, who made a clean pickup but bobbled the ball in his right hand before firing to first, where he got Fletcher in a close play upheld on video review. A lineout and strikeout ended the game.
Campbell effectively mixed his fastball, curve, slider and changeup over his 101 pitches in seven innings and struck out 10, his fifth time in double digits this season. He has given up two or fewer runs in seven straight starts.
“He did everything he could to give us an opportunity to win the game,” Hogs coach Dave Van Horn said. “He probably didn’t have his best stuff early, kind of kicked it into gear in the middle a little bit and got out of a jam or two. It seems like every time he goes out there, he gives us six-plus, seven-plus, and we were in every game and had a chance to win it.”
UP NEXT
Florida State plays in a Bracket 1 winners’ game against Michigan on Monday night.
Arkansas meets Texas Tech in an elimination game Monday afternoon.