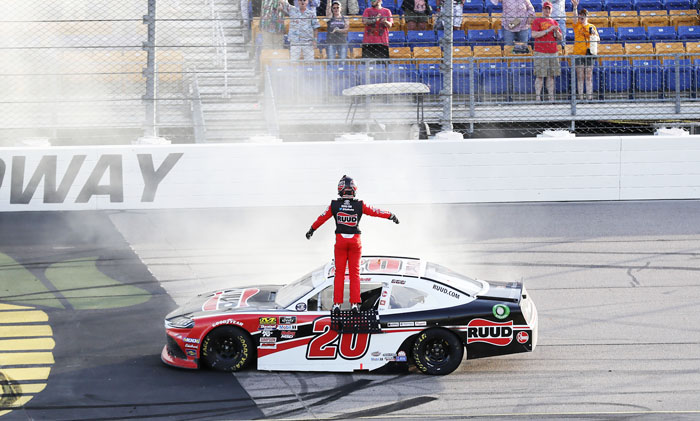 NEWTON, Iowa (AP) — Christopher Bell won the NASCAR Xfinity series race Sunday at the Iowa Speedway, his fourth victory of the season and second straight in Newton.
Bell led 186 of 250 laps in the No. 20 Toyota to claim his second short track win of 2019 by nearly two seconds. He also won at Bristol in April.
Pole-sitter Cole Custer was second, followed by Justin Allgaier and Harrison Burton. Zane Smith of JR Motorsports was fifth in just his fifth start in the series.
Custer briefly snagged the lead with 32 laps left on a restart, but Bell quickly grabbed it back as the two cars made contact on Bell’s low pass. Bell then held Custer off on a restart with 10 to go by grabbing the high line.
Bell gave Joe Gibbs Racing its fifth win in its last seven starts at Iowa, and Bell was able to celebrate back-to-back wins with his parents in attendance.
“Man, I got to win at Dover (the week before) Mother’s Day weekend…with my mom there. Now I just won on Father’s Day weekend with my dad here,” said Bell, who won for the 12th time in the series. “It was pretty special.”
The first race of Sunday’s doubleheader produced some unexpected drama, as Truck series winner Ross Chastain had his victory taken away from him after his truck failed the post-race inspection.
Bell ensured that the nightcap was largely a snoozer.
Custer won his 10th career pole earlier Sunday and led the first 54 laps. But Bell took over after a restart late in the first stage and won a frame for the seventh time this season.
Bell increased his edge over the next 60 laps, pushing his lead to as much as six seconds to take the second stage as well.
A caution with 72 laps left gave Custer a shot at overtaking Bell. But Bell held Custer off by going high — an approach that appeared to become quite popular this weekend.
A flag about 35 laps later laps left gave Custer one more crack at Bell, and Custer edged Bell by a half of a second in the race off pit road to retake the lead.
Bell went low a few laps later though, nudging his way back out front as Custer struggled to keep his No. 00 Ford out of the wall.
“I think it was racing,” Custer said when asked if he had any hard feelings about how Bell raced him. “It was fun. Christopher and (his team) had the best car all day.”
Tyler Reddick, the series leader and the winner of three of the last five races, finished a season-worst 15th. A flat tire late in the first stage put Reddick in a hole he couldn’t climb out of.
___
More AP auto racing: https://apnews.com/apf-AutoRacing and https://twitter.com/AP_Sports