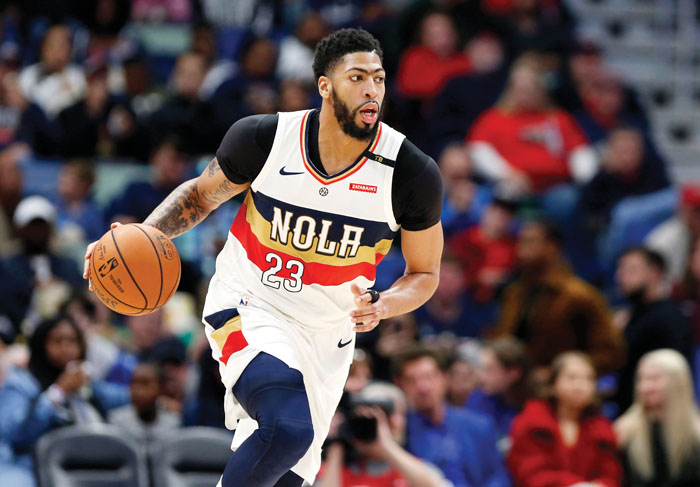 FILE - In this March 16, 2019, file photo, New Orleans Pelicans forward Anthony Davis brings the ball up during the first half of the team's NBA basketball game against the Phoenix Suns in New Orleans. Two people familiar with the situation say the Pelicans have agreed to trade Davis to the Los Angeles Lakers for point guard Lonzo Ball, forward Brandon Ingram, shooting guard Josh Hart and three first-round draft choices. The people spoke to The Associated Press on condition of anonymity because the trade cannot become official until the new league year begins July 6. ESPN first reported the trade.(AP Photo/Tyler Kaufman, File)

NEW ORLEANS (AP) — Anthony Davis will wind up with LeBron James and the Los Angeles Lakers after all.

The people spoke to The Associated Press on condition of anonymity because the trade cannot become official until the new league year begins July 6. ESPN first reported the trade.

The deal ends a nearly five-month saga that became an awkward NBA sideshow, arguably derailed the Lakers’ push to make the playoffs and even cost people jobs after Davis requested a trade in late January through his agent, Rich Paul, who also represents James.

Now the 26-year-old Davis, a six-time All-Star, will bring his dynamic, up-tempo, above-the-rim play to Hollywood alongside the 34-year-old James, a three-time NBA champion and Finals regular.

In return, the Pelicans receive the promise of a young core the Lakers are blowing up in order to make the deal, as well as the opportunity to add more; New Orleans already had the first pick overall in Thursday’s draft and will have the Lakers’ fourth overall choice, giving new basketball operations chief David Griffin the chance to add another top-tier prospect to his presumed first pick of Duke star Zion Williamson.

It remains to be seen, however, how well Ingram will recover from a blood clot that sidelined him for part of last season. He was diagnosed with deep vein thrombosis in March.

The Lakers and Pelicans missed the playoffs last season and Davis’ trade demand caused a palpable degree of acrimony between the clubs as the Lakers publicly pursued a deal and the Pelicans asked the NBA to look into the possibility of a tampering violation.

After the trade deadline passed with no deal, Davis finished out the season as a lame-duck All-Star who at times heard boos and insults during home games and the Pelicans fired then-general manager Dell Demps.

Several Lakers players acknowledged they had been shaken by thoughts of their possibly imminent departure, and resulting losses slid them out of playoff position at midseason.

Getting the deal done became a near-imperative for general manager Rob Pelinka and owner Jeanie Buss after the Lakers’ latest round of front-office drama. On the final day of their franchise-record sixth straight non-playoff season, president of basketball operations Magic Johnson abruptly quit his job and criticized Pelinka for talking behind his back.

Johnson couldn’t resist another backhanded shot at Pelinka on Saturday with a telling series of tweets that began: “Great job by Owner Jeanie Buss bringing Anthony Davis to the Lakers!”

With the Pelicans’ front office now run by Griffin, whose relationship with James dates to the championship they won together in Cleveland in 2016, relations between the two franchises warmed enough to complete a trade that will ripple throughout the NBA. It will affect the offseason plans of a number of other teams — namely, the Boston Celtics, who actively sought to acquire Davis and had an arsenal of young talent and draft picks to potentially include in a deal.

Davis is a dynamic 6-foot-10 forward who also plays center, shoots with range, runs the floor, blocks shots and can handle the ball. He has averaged 23.7 points, 10.5 rebounds and 2.4 blocks during his career. But in seven seasons in New Orleans, his Pelicans teams made the playoffs just twice and won one series against Portland two seasons ago.

The Lakers might not be done shopping for big names, either.

Kyrie Irving, Kemba Walker, Jimmy Butler and Southern California native Kawhi Leonard are among free agents who could be pursued by the Lakers, who’ve made no secret of their plan to build a super team through free agency.

Davis has just one year remaining on his contract before he becomes eligible for free agency, but that was less of an issue for the Lakers than any other trade partner, given Davis’ and James’ shared representation.

The trade also helps launch a new era for the Pelicans under Griffin as New Orleans bids adieu to the “Unibrow” and welcomes young talent the Lakers had patiently assembled with a series of high first-round picks and later choices that brought high value.

The Pelicans’ biggest prize in the deal should be Ingram, if healthy.

The 21-year-old, 2016 No. 2 overall pick showed signs of becoming an elite scorer alongside James, and he is expected to recover fully from his blood clot problem and the resulting procedures.

The deal ends a tumultuous tenure with the Lakers for Ball, whose dream of playing for his hometown team lasted just two years.

The 2017 No. 2 pick from UCLA grew up considerably with the Lakers while breaking free from the influence of his famous father. He exhibited effective playmaking skills and strong defense for the Lakers when healthy. However, he struggled to score and appeared in just 99 of 164 games over his two seasons due to numerous injuries.

Hart played two solid seasons as a member of the Lakers’ rotation, averaging 7.9 points and 3.9 rebounds after arriving from Villanova.