US Open: Woodland takes lead into final round 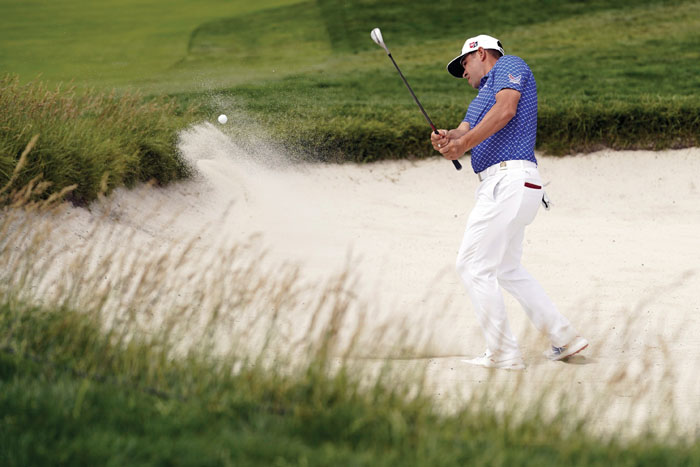 Gary Woodland hits out of a bunker on the sixth hole during the third round of the U.S. Open golf tournament Saturday, June 15, 2019, in Pebble Beach, Calif. (AP Photo/Carolyn Kaster)

PEBBLE BEACH, Calif. (AP) — The toughest test in this U.S. Open might be more about nerves from chasing history than Pebble Beach.

Gary Woodland held it together Saturday with bold plays and two unlikely pars for a 2-under 69, giving him a one-shot lead over Justin Rose and his first appearance in the final group of a major.

Lurking is Brooks Koepka, who played bogey-free for a 68 to give himself a shot at a record that has stood for 114 years as he tries to join Willie Anderson with a third straight U.S. Open title.

Standing in the way is Pebble Beach, a strong enough test that has been missing strong wind, its best defense.

The final hour of the third round gave a glimpse of possibilities, how fortunes can change quickly. Woodland twice looked as though he were about to lose two shots or more of his lead until chipping in from 35 feet on the par-3 12th hole, and holing a par putt from just over 40 feet on the par-5 14th.

“I’m excited to be where I’m at right now,” Woodland said.

Koepka had some theatrics of his own, misjudging a lie in the rough so deep he could barely see the golf ball left of the 15th green. It sailed long into the first cut, some 35 feet away, and he holed the putt for par to keep a clean card.

He was part of a group four shots back that included Louis Oosthuizen, who birdied three of his last four holes to salvage a 70; and Chez Reavie, who made his share of long par putts for a 68.

Koepka won at Erin Hills in 2017 with his power and at Shinnecock Hills last year with his clutch putting. He might need a little of both to make up a four-shot deficit at Pebble Beach, though he brings the most recent experience handling the pressure of a final round in a major. He is going for his fifth major title in his last nine tries, a stretch not seen since Tiger Woods at his peak.

“I just enjoy the pressure,” Koepka said. “I enjoy having to hit a good golf shot, making a putt when the pressure is on. If you’re within three on the back nine, anything can happen. Hang around all day and see what happens.”

Curtis Strange, the last player with a shot at three straight U.S. Opens, also shot 68 in the third round in 1990 and got within two shots, only to fade with a 75 on the final day.

Rory McIlroy didn’t get enough out of how well he hit the ball and had to settle for a 70, leaving him five shots behind.

As for Woods, he joined a list of big names who went the wrong direction. Woods had a 71 and was 11 shots behind. Dustin Johnson also had a 71 and was nine back. Phil Mickelson saw his career Grand Slam hopes vanish at sea when he hit driver in the Pacific on the 18th hole and made triple bogey for a 75.