HS wrestling: Davie Hall of Famer steps down after 43 seasons 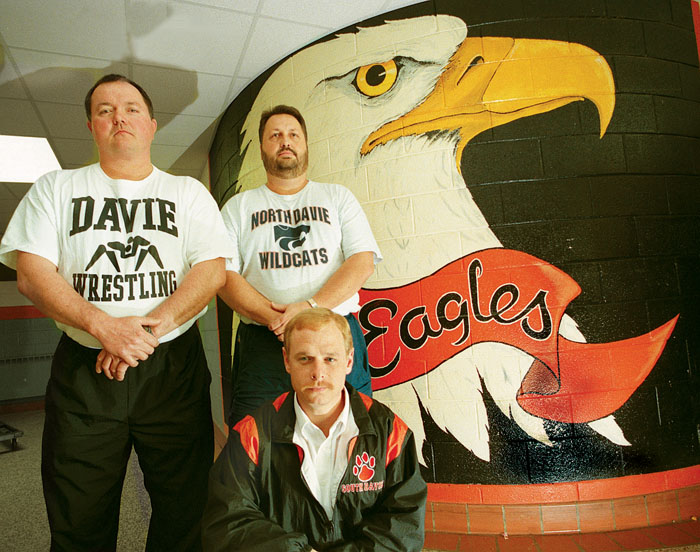 MOCKSVILLE — Riley Lowery III, the East Spencer native who made Davie County wrestling the flagship program for his school retired on Thursday.

Known universally as “Buddy,” he coached 43 seasons, which is remarkable. His overall record at Davie was an even more remarkable 913-136-2.

“All his numbers look like misprints,” said Brian Pitts, the Davie County-Enterprise Record reporter who has covered a good chunk of Lowery’s career.

Lowery is a member of the Davie County and Salisbury-Rowan halls of fame and has been inducted into the North Carolina Chapter of the National Wresting Hall of Fame.

The son of R.B. Lowery and Almeda Love Lowery, he grew up in East Spencer in the 1960s. He was a standout athlete at North Rowan High in the latter part of that decade, starring for the Cavaliers in football, wrestling and track and field.

As a senior in the 1969-70 school year, he was All-North Piedmont Conference and All-Rowan County in football as an offensive end.

In wrestling, he was undefeated until the Western North Carolina High School Activities Association semifinals. He wrestled at 185 pounds and placed third in the WNCHSAA. He was part of WNCHSAA championship teams in 1968 and 1969, wrestling for coach Ralph Shatterly.

In track and field, Lowery was conference champ in the discus and placed fifth in the WNCHSAA in the shot put and discus. The throws he made five decades ago would still win most meets today.

After graduation, he attended Fork Union Military Academy for a year, along with one of his athletic rivals, Davie County’s Allan Barger, the son of former North Rowan coach Burton Barger.

Lowery played defensive end for East Carolina University for three seasons (1972-74) in an era when ECU’s defensive unit was known as the “Wild Dogs.” He played on two Southern Conference championship teams. Linebacker Danny Kepley, who went on to be a Canadian Football League Hall of Famer, led the “‘Wild Dogs.” Keply said in a 2004 interview that he was successful because he was surrounded by great players such as Lowery.

Lowery became the fourth wrestling coach in Davie history when he was hired in 1976-77. Davie went 7-7 in his debut season and suffered losing seasons the next two years.

His philosophy of wrestling was simple and direct. He intended to outwork his opponents.

“My thinking was that no matter how hard you came at me, I still ain’t gonna get beat,” Lowery said at his Salisbury-Rowan Hall of Fame induction in 2012.

Davie moved into the 4A Central Piedmont Conference in 1985-86. Lowery coached in the CPC 34 seasons and won 27 conference championships. In CPC matches, his teams went 177-7. His teams also won 15 CPC tournaments.

Lowery followed Bill Peeler as Davie AD in 1991, but taking on more duties didn’t diminish his fire for wrestling.

Davie put together separate winning streaks of 49 and 42  matches under Lowery.

There were heartbreaking near-misses in state finals, but there also were state championships.

Davie may have won more titles under Lowery, but the concept of a playoff system and dual team state championships didn’t start in the NCHSAA until 1990. Lowery led Davie to 4A titles in 1994 and 2006. Davie was state runner-up six times.

As far as team scoring for the individual championships, Lowery’s team won a state title in 1995 and placed second six other times.

Lowery coached 44 wrestlers who reached or surpassed the 100-win milestone. He coached 11 individuals who accounted for 15 state championships. One of those wrestling state championships was won by his son, Patrick, who became an outstanding linebacker at N.C. State.

Pitts has a favorite Lowery story.

A Davie wrestler was illegally slammed in a major playoff match with West Forsyth a few seasons back. There was legitimate concern about an injury. It was an opportunity for Davie to gain an unexpected six points, but Lowery didn’t tell his wrestler to stay down. He didn’t want to win that way. He told his guy if he was still able to wrestle, then he should wrestle. Davie lost that bout and lost a close match that it could have won by claiming an injury default. West Forsyth went on to win the 4A state title. Lowery had no regrets.

“Buddy, one of the greatest winners the sport has known in North Carolina, was a shining example of grace in defeat even when defeat meant the end of the season, even when defeat meant his team fell one short of the state championship,” Pitts said. “He suffered some narrow losses in the state finals, but he didn’t go chasing the officials, screaming that he got hosed. He didn’t make excuses. He shook your hand and said we’ve got to get better.”

Pitts was there for several of those difficult losses in state finals. Reporters would swarm to interview the winning side, but Lowery would always patiently stick around in the hall way or in a corner of the gym to talk about it whenever reporters got around to him.

Lowery retired from teaching 10 years ago, but his work on Davie’s athletic fields and with his beloved wrestling program continued for many years after that.

He did things the right way and he did them at one school for an incredibly long time.

Davie AD Mike Absher told the Winston-Salem Journal, “He obviously left the program in a great spot. Obviously it’s a very, very important position for us to fill.”

All-County Golf: ER’s Patterson is Player of the Year