The fire ants are back with a vengeance 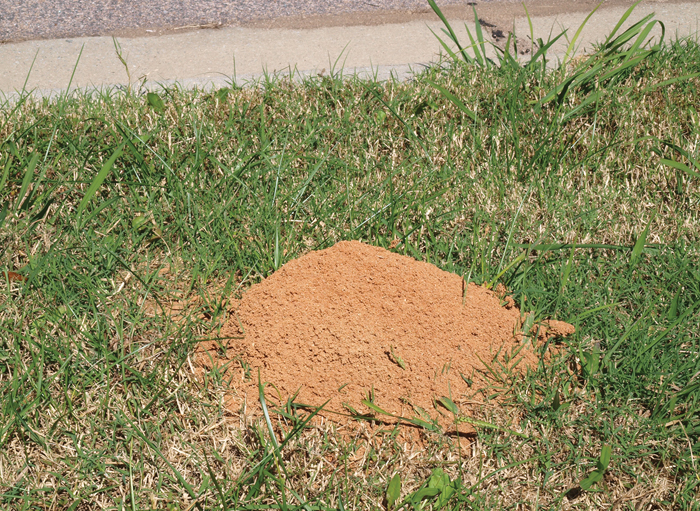 Submitted photo Fire ant mounds are larger than the usual ant mounds. If the nest is distrubed, ants will pour out quickly.

SALISBURY — Infestations of fire ants are widespread and have become very active over the past few weeks. I can attest, as I have been stung three times in the last few weeks. Unfortunately, the ants are easily spread throughout the county on soils from nurseries, construction equipment, recreational vehicles and hay.

Fire ants are very protective, delivering a powerful sting that creates an intense itch with a raised pustule that often becomes infected and may leave a permanent scar.

This ant is particularly dangerous because they congregate in great numbers, quickly stinging the victim in unison. Small children, farm animals and those with allergies to insect stings are at great risk.

Fire ants look very much like a typical ant — they are not large. However, they are often multi-colored.  These social insects build colonies with thousands of workers. The queen mates in flight and can lay up to 300 eggs a day. Fire ant queens can live for 7 years.

Fire ants prefer open, sunny areas such as lawns or pastures for their nesting sites, but when disturbed, they often migrate to shrub beds, trees or fence rows. The mounds are very distinct, 10-12 inches wide and 5-6 inches tall.  The nesting mounds are usually flat with no entrance holes. However, fire ants can seemingly occupy an area with no identifiable mound.

Positive identification of a fire ant colony is rather easy. Take a stick and jam it in the center of the mound. Fire ants will quickly boil out and cover the stick in a matter of seconds. Other ant species become confused and will run away, but not fire ants.

Workers carry the toxic bait sprinkled around the mound to the queen, eventually killing her and the colony.  If fire ant mounds pose an immediate hazard to people, especially children, drench with a lawn insecticide. Be sure to keep kids and pets away from the treated areas.

Boiling water, gasoline, grits and other home remedies are often ineffective and can be dangerous. Fire ants are well organized and adaptive with a series of tunnels and move quickly to safe havens when threatened.  For more complete information, go online to  www.ces.ncsu.edu/depts/ent/notes/Urban/ifa.htm