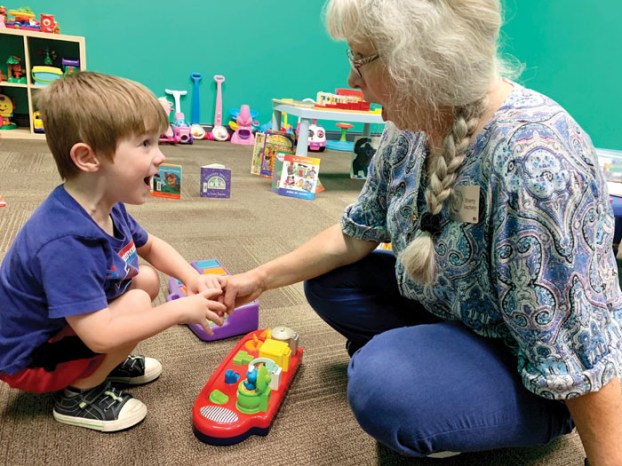 On one particular Tuesday morning, Henry Allen and his dad, Brian, are the first to arrive. Vechery says the weekly group may be as small as two or as large as 26.

“When we have a tiny group, we go with the flow and shift with the drift,” Vechery said.

Henry, who turned three in April, has some language delays, but he’s all about describing animals he finds in the playroom to Vechery.

After greeting Henry and letting him get settled in, Vechery began the day’s activity: sorting items.

There were several toys on display — some involved putting colored pegs on a board, others putting magnetic shapes together or placing squares with holes on them on the correct pegs. Henry did well with each.

“You can do all kinds of things with sorting,” Vechery said. “Let your child take the lead. There’s no right answer.”

Sorting laundry, for example, is a great way to learn sorting. It is a basic math skill, and before long, children are counting, she said.

Then Vechery brought out a large container of plastic bears, which could be sorted on paper plates or in plastic bowls corresponding to each color. By that time, others had joined the group.

Caregiver Hannah Addair brought in Nishta and Param Patel, twins who turn two in July. Then the morning session morphed into some time about sharing.

Vechery took it all in stride.

“We are still learning the concept of sharing,” she said. “It’s all about parallel play. We are not quite cooperating yet.”

Soon, however, Moira Merry arrived, the peacemaker of the group. Moira turns 4 in August, and she and Henry get along well. Before long, all the children played beautifully together.

“She likes it a lot,” Moira’s mom, Krystal, said of the play group. “The biggest benefits are socialization for her and me, too.”

It’s a standing date each Tuesday, she added.

“They like seeing different kids besides being around each other, and they love seeing the variety of books and toys that are here,” she said.

Allen’s wife Melanie has an older child who lives out of state, so Henry doesn’t get much interaction with other kids, he said.

Because of his speech delays, the Allens hope to enroll Henry in Head Start this fall, his dad said. “He is making a lot of progress with his talking.”

Meantime, they’re keeping busy with play group on Tuesdays and swim classes on Thursdays, along with craft classes at Michael’s and summer movies at Cinemark.

But play group seems at the top of the list.

For more information about the Kaleidoscope Play & Learn groups, contact Sherry Vechery at 704-603-3367 or svechery@smartstartrowan.org.