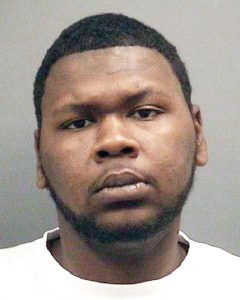 SALISBURY — Police charged a local man with simple possession of marijuana, reckless driving and other offenses after a late-night traffic stop for speeding.

Marquise Sential Robinson, 26, of the 200 block of Harrel Street, was charged Thursday with possession of a Schedule VI controlled substance; misdemeanor reckless driving to endanger; and misdemeanor fleeing to elude arrest with a motor vehicle.

At 11:38 p.m., an officer stopped a 2003 Buick LeSabre driven by Marquise Robinson. The officer said he was speeding 72 mph in a 35-mph zone near Old Wilkesboro Road and Brenner Avenue.

The officer tried to stop the vehicle on Brenner Avenue, but Robinson sped up and turned onto Merritt Avenue, police said. According to a report, the vehicle matched the description of one that was involved in a hit-and-run with an N.C. Highway Patrol vehicle the day before.

The driver slowed down and pulled into the Krispy Kreme parking lot. Robinson was asked to step out of the vehicle, and the officer said he could smell marijuana. Police searched Robinson and found a marijuana blunt in the vehicle, the report said.

In April, Robinson was charged with possession of cocaine and marijuana. In February, Robinson was shot twice in the stomach on Tabernacle Street, not far from Standish Street. He drove himself to the hospital and called his girlfriend to meet him there.

Robinson was released from the Rowan County Detention Center under a $5,000 secured bond.