SALISBURY — A 23-year-old man was charged with arson after an apartment fire Friday in which the tenant’s dog died, according to the Salisbury Police Department.

Marvin Denzel Pruitt is charged with first-degree arson. He was arrested at his home without incident and was being held at the Rowan County Detention Center on a 48-hour domestic hold.

The fire was reported at 1:30 p.m. Friday at Apartment 14 of the Regency Court apartment complex at 1100 W. Fisher St., off Lloyd and Partee streets.

The fire was contained to a bedroom in the second-floor apartment. 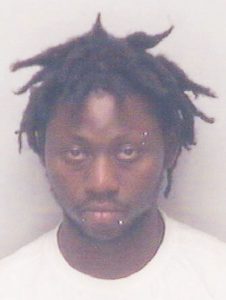 A neighbor, Male Harris, said he and his brother saw smoke coming from the apartment building. They knocked on the door of the apartment and the tenant answered. Harris said he asked the woman if there was anyone else inside, and he noted that she seemed to be in a panic.

Harris said the woman told him her daughter’s former boyfriend set a closet on fire.

The tenant told him that her pit bull named Bella was inside. Harris said he went into an upstairs bedroom and tried to coax the dog to come out.

“The smoke was too thick,” he said.

The dog began to crawl toward him, but Harris said it seemed as if “she was scared to come out.”

Harris said he felt bad that he couldn’t save the dog.

He had to back out of the apartment after being overcome by smoke. He said he looked over his shoulder and could see flames coming from the bedroom.

Tiffany Moss said she arrived at the complex with her brother. When she realized there was a fire, she began knocking on doors to notify neighbors.

Agencies that responded to the fire include East Spencer, Locke, Granite Quarry and Kannapolis fire departments; Rowan EMS; and Rowan County Rescue Squad. The Red Cross is assisting the families who were displaced.