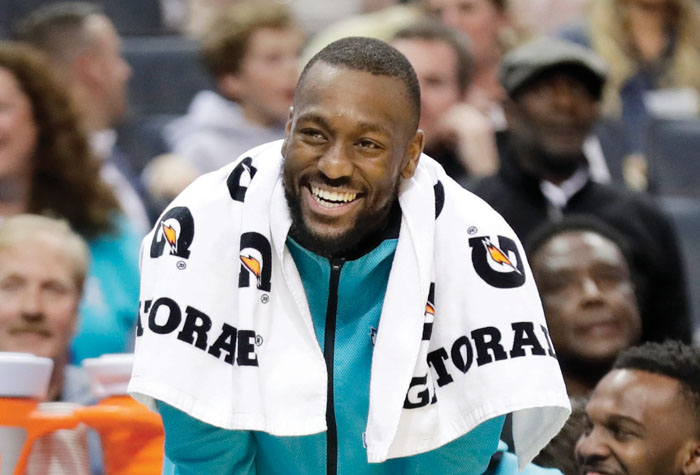 FILE - In this March 26, 2019, file photo, Charlotte Hornets' Kemba Walker laughs at a play from the bench during the first half of an NBA basketball game against the San Antonio Spurs in Charlotte, N.C. The three-time All-Star point says he’d be willing to work with the Hornets and take less than the “supermax” $221 million contract he’s eligible to receive to re-sign with Charlotte. (AP Photo/Chuck Burton, File)

CHARLOTTE (AP) — Three-time NBA All-Star Kemba Walker said he would consider taking less money than he is eligible to make to stay with the Charlotte Hornets if that means helping them build a winning team.

Because Walker was named to an All-NBA team this season, the Hornets can offer him a five-year “supermax” contract worth up to $221 million — significantly more than the five-year, $190 million deal had he not been named All-NBA.

Other NBA teams can only offer a four-year deal worth $140 million when free agency begins June 30.

“Yeah, why not? I would take less, for sure,” Walker said Thursday during his youth basketball camp at Ardrey Kell High School in Charlotte.

The eight-year NBA veteran said the Hornets remain his first priority, but he said he’s “pretty sure” he will meet with other interested teams before making a decision on his future.

The 29-year-old Walker said he’s eager to hear what other teams have to offer.

“That all factors in (to my decision) when I sit down with the teams and hear what guys have to say,” Walker said. “I think that will all come into play. I’m not really sure right now. Like I said Charlotte is my first priority and I have to see what (the Hornets) have to offer, as well as other teams.”

Hornets general manager Mitch Kupchak previously said the team will do “everything we can” to re-sign Walker, the franchise’s all-time leading scorer.

There has been plenty of speculation about where Walker might end up, including with the New York Knicks because he grew up in the Bronx.

But Walker has repeatedly said he loves playing and living in Charlotte.

Walker said he doesn’t have a timetable for signing a contract but added he wouldn’t mind getting it done as soon as possible.

Asked if he was confident he’d re-sign with Charlotte, Walker shrugged his shoulders and said, “I have no clue.

“I don’t know,” Walker added. “This is where I want to be and if it doesn’t work out, it just doesn’t. I’m prepared.”

Walker has been selected for the last three All-Star games and was named a starter this year for the first time. He averaged a career-high 25.6 points and 4.4 rebounds per game last season along with 5.9 assists while playing in all 82 games.

Walker has averaged more than 20 points per game in four straight seasons and is averaging 19.8 points per game for his career since joining the league in 2011 out of UConn, where he won a national championship with the Huskies.

The Hornets have made the playoffs only twice during Walker’s career and have never made it out of the first round — a major disappointment for the highly competitive Walker. So the prospect of playing for a team that is closing to competing for a NBA championship could lure Walker away from Charlotte.

Walker said right now he is just trying to enjoy the experience, regardless of how stressful it might be.

“It’s my first time being a free agent and having the opportunity to be in the driver’s seat and have the opportunity to make a decision and play for different teams, and that is exciting in itself,” Walker said. “And when teams have interest in you I think that is pretty cool.”