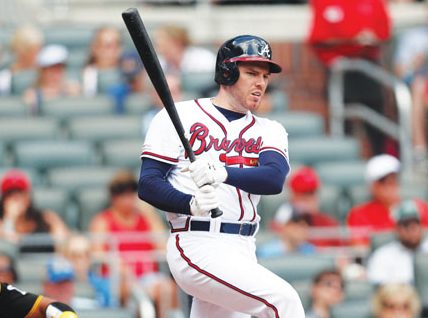 Freddie Freeman got the home run parade started for Atlanta in the first inning with a two-run shot. (AP File Photo/John Bazemore)

ATLANTA (AP) — One year after he was left off Atlanta’s postseason rotation, Julio Teheran has re-emerged as a reliable leader on a young staff.

Teheran’s roll of superb starts is a big reason the Braves are back in first place in the NL East.

Josh Donaldson drove in the tie-breaking run in Atlanta’s five-run fifth inning to win his rematch with Joe Musgrove, Teheran allowed only one earned run and the Braves beat the Pittsburgh Pirates 6-5 on Thursday to complete a four-game sweep.

The Braves have won seven straight to move into the division lead, 1½ games ahead of idle Philadelphia. The Phillies and Braves open a three-game series on Friday night.

Teheran (5-4) opened the game with two walks and needed 27 pitches to survive the first inning. He recovered, lasting six innings while giving up only three hits. He has allowed no more than one earned run in his last eight starts.

“It was very evident to me that he was on a mission,” Snitker said.

“That’s the way I want to pitch,” Teheran said. “Last year, it doesn’t mean I was bad, but it was up and down.”

Luke Jackson gave up Starling Marte’s run-scoring single in the ninth before recovering for his 10th save in 15 chances.

The Pirates have lost seven straight after failing to hold an early 2-1 lead in this one.

Musgrove (4-7) struck out Donaldson in the first inning. It was their first meeting since Musgrove hit Donaldson with a pitch on Monday night, igniting a confrontation that led to both players’ ejections. The short outing gave Musgrove the rare opportunity of making two starts in the same series.

“I was ready to go out and attack him like I normally would,” Musgrove said. “I put that behind me. I can’t go out there with that stuff lingering in the back of my mind or try to prove a point with him.”

Musgrove hit Dansby Swanson with a first-inning pitch, but there was no sign of leftover bad feelings from the skirmish three days earlier.

Freddie Freeman’s triple to the right-field corner in the fifth drove in Swanson to tie the game. Donaldson, who is appealing his one-game suspension for his role in the confrontation, hit a single to right to drive in Freeman.

Ozzie Albies added a two-run double to center field in the big inning.

Manager Clint Hurdle says his players haven’t quit. After trailing 6-2, Pittsburgh scored the last three runs of the game. “We had the go-ahead run at the plate,” Hurdle said, referring to the ninth-inning opportunity. “I love the fight.”

Snitker was ejected by home plate umpire Tripp Gibson after Gibson’s called strike three on Acuña ended the fourth inning with runners on first and second. Snitker’s objection to the high strike call led to his second ejection this season and 11th of his career.

The move made Thursday is the result of Seager getting hurt in the ninth inning of a loss to the Los Angeles Angels on Tuesday.

The Dodgers say he had an MRI that revealed a strain less severe than initially believed.

“I was just talking to him today and the thing that’s disappointing and disheartening for him is that there were no signs of this,” manager Dave Roberts said. “So, as far as fatigue, soreness, any type of strain a little bit before that to kind of give a heads-up. But I think it was kind of out of the blue.”

The injury couldn’t have come at a worse time for Seager, who had a season-best, nine-game hitting streak during which he was batting .459 with seven doubles, one home run and nine RBIs.

Seager missed most of last season after having Tommy John and left hip surgeries.

SANTO DOMINGO, Dominican Republic (AP) — U.S. prosecutors said Thursday that one suspect in the shooting of former Red Sox star David Ortiz is believed to be wanted in Pennsylvania for attempted homicide, while the father of another suspect said his son belongs to a notorious Dominican gang of drug-dealing hitmen.

Berks County District Attorney John Adams said he believes Luis Rivas-Clase to be the suspect wanted for a Reading, Pennsylvania, shooting in April 2018, although confirmation would have to come through a fingerprint match.

Pennsylvania authorities have released a mug shot of Rivas-Clase that strongly resembles the suspect in an image provided by Dominican authorities, who provided the same name but without the hyphen listed in U.S. court documents.

Later Thursday, Dominican authorities brought in the five suspects from Wednesday along with a handful of additional suspects, including a woman. The nine were rushed to the court in a police pickup truck accompanied heavily armed police for their first appearance, during which charges will be presented against them so they can continue to be held.

Ortiz’s family said Thursday that he is still an intensive care unit at Massachusetts General Hospital. “He continues to heal and make progress. David will continue to recover in the ICU and future updates on his condition will be provided when necessary,” a statement said.

American authorities don’t expect to see Rivas-Clase, 31, back in Pennsylvania to face trial anytime soon, if ever.

“Since this individual would be subject to charges in the Dominican Republic, the chance of us getting him back is frankly far-fetched,” Adams told The Associated Press.

Separately, Rivas-Clase has also been charged with providing false identification to law enforcement and driving without a license in Reading. Bail was set at $10,000, and records show bond was posted on Nov. 29.

But Rivas-Clase skipped bail and was subsequently declared a fugitive, according to an online docket. His attorney in that case did not immediately return a message, while court records do not list an attorney in the attempted homicide case.

Authorities in the Dominican Republic say Rivas-Clase is still at large.

Meanwhile, the father of another suspect in Sunday’s shooting of Ortiz at a bar said his son is a member of gang of hired assassins and low-level drug dealers known as the Gilberts.

The father, Nisdean Mirabal, told local television morning show “The Alarm Clock” that he had severed relations with his son, Oliver Moises Mirabal Acosta, after he was tied to a home used by the gang led by Junior Minaya German, who is known as Gilbert.

Gilbert was fatally shot by police in 2013, according to Dominican media.

Nisdean Mirabal said his efforts to dissuade his son from criminality failed.

“He shocked me, saying, ‘I love Gilbert more than I love you.’ When he said that, we went our separate ways,” Nisdean Mirabal said.

Mirabal Acosta was arrested Tuesday in the town of Mao, in the northern Dominican Republic. He is accused of driving a car used to stalk Ortiz before two other young men on a motorcycle shot the slugger in the back.

The alleged gunman is seen on surveillance video exiting the car before mounting the motorcycle.

“I know, from the video and the information that’s been put out, that he’s one of those responsible, and he needs to pay for what he’s done,” the father said.

Rickie Fowler brings game along with mullet to US…