Rickie Fowler brings game along with mullet to US Open 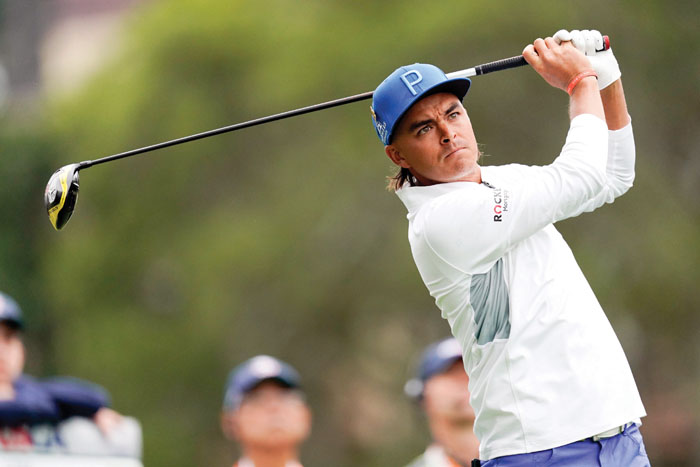 Rickie Fowler watches his tee shot on the second hole during the first round of the U.S. Open Championship golf tournament, Thursday, June 13, 2019, in Pebble Beach, Calif. (AP Photo/Carolyn Kaster)

PEBBLE BEACH, Calif. (AP) — Someone wanted to know about Rickie Fowler’s haircut, not the kind of question you usually get after taking a share of the lead in the U.S. Open.

The mullet was attention grabbing, for sure. So on this day at Pebble Beach was his golf.

What that means for the rest of his U.S. Open is a question harder to answer than his hairstyle. Fowler has a history of unpredictability in major tournaments, as evidenced by the 84-65 he shot on the weekend last year at Shinnecock Hills.

Still, if his game holds up through this weekend he might want to see a barber before posing with the Open trophy Sunday night.

“We were doing it for the PGA in May. We’re calling it Mullet May,” Fowler said about the do’s he and Jason Dufner got for charity. “We weren’t doing it to get any extra attention or anything like that. It was for fun. And obviously we’re not trying to look good with it.”

What did look good Thursday in the opening round of the U.S. Open was Fowler’s game. He made just a single bogey on his way to an opening 5 under 66 that left him tied for the early lead.

Justin Rose is the leader after the first round of the U.S. Open, with birdies on the last three holes to tie the Open scoring record at Pebble Beach with a 6-under 65.

It might have been the best round from a player with a mullet since John Daly won the PGA in 1991. It might have also been one of the best ball striking rounds of Fowler’s career.

“It felt like the worst I could have shot,” he said, “so that’s a good thing.”

It is a good thing for all Rickie Fowler fans, of which there are many in golf. He’s as popular as he is nice, a good combination on a tour with more than its share of petulant players.

But while he’s a proven winner, he hasn’t won enough to take his place among the game’s elite.

And while he’s had flashes of greatness at major championships, he’s yet to win one of the ones that matter the most.

“If I don’t win a major that’s not going to necessarily define me,” Fowler said earlier in the week. “So I want to win a major? Yes. I would love to and then knock off some more after that.”

The U.S. Open would be a good way to start, as well as a good place to erase some painful memories from the past. That includes the 84 from last year’s third round at Shinnecock, where whatever could go wrong did go wrong for Fowler.

But Fowler is nothing if not positive. He believes in his talent, and at the age of 30 he’s got plenty of time to add to his five PGA Tour wins and capture a major or two.

He points to 2014 where he was the only player to finish in the top 5 of all four majors as evidence of his potential, and the final round at the 2018 Masters where his 65-67 on the weekend wasn’t enough to overtake Patrick Reed.

“I wouldn’t say I’ve necessarily had one in my hands and let it slip away, which is a good thing,” he said. “But we have to go get ourselves one, because we’ve been in the position enough times where it could have went the other way.”

On Thursday, most things went Fowler’s way. He had the advantage of an early start, and got a jolt from a birdie three on the 512-yard second hole that got him going.

His goal in recent years has been to try and treat majors like they were just regular tournaments, something Fowler quickly reminded everyone they’re not. He’s trying not to get caught up in the moment, trying to avoid the mistakes that have plagued him in the past.

“I’m definitely at a point where this is another weekend on the course, competing against the best players in the world,” he said. “And this is what we love to do. The last few years it’s been how it’s supposed to feel, when you want to go out and contend and get the job done.”

If Fowler does get the job done it will be a win popular both with fans and his fellow players. He’s close to many of his contemporaries on the tour, and has been visible after he’s done playing at tournaments when he comes out to congratulate his friends on wins.

His last two rounds in U.S. Opens are 65 and 66, though with nothing to really show for it. He understands that good starts and good finishes don’t mean much when they’re sandwiched around mistakes in between.

Still, one day into this Open he’s just where he needs to be.