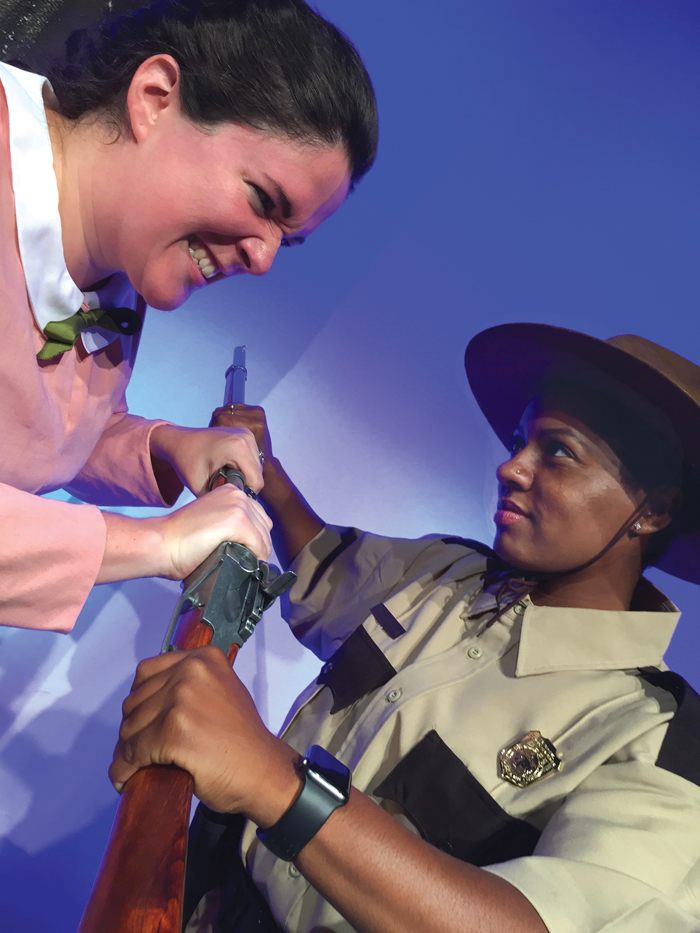 LucyGale (Beth Bentley) and Ranger Wilson (Terri Montreal) spar with each other in St. Thomas Players production of “Shiloh Rules” at Lee Street.

It’s not easy finding a new take on something as heavily scrutinized as the Civil War, but Doris Baizley has done it in “Shiloh Rules,” an inventive comedy with some drama, history and first-aid tips thrown in.

Lee Street theatre will be presenting this CFA’s St. Thomas Player’s production this June 13-15 and 20-22 at 7:30 p.m. and June 16 at 2:30 p.m..  This amazingly funny and insightful production, directed by David Pulliam, will leave you in stitches, while giving you a peek-inside the world of reenactment communities.

Tickets are available through Lee Street’s website at leestreet.org or by calling the box office at 703-310-5507 Monday-Friday, 1-5 p.m.

The play is set, not during the Battle of Shiloh in 1862, but during a modern-day re-enactment of it.

Two veteran re-enactors, one playing a Union nurse named Clara (Linda Smith) and another playing a Confederate refugee named Cecelia (Linda Jones), have a bit of a history as a result of previous encounters at the annual event in Tennessee, and this year each has a trainee in tow: Meg (Elizabeth Smile) for the North, LucyGale (Beth Bentley) for the South.

Author Baizley has some daffy fun with the women’s inconsistent role-playing. LucyGale, for instance, has to be reminded that she’s not supposed to be able to read; Meg, who thought she had fully studied for her part, is shocked when the actual (fake) artillery fire begins. “Is it all going to be this loud?” she laments. Ms. Baizley also invents two fine spark plugs to liven things up further: the Widow Beckwith (Denise McKercher), who sells concessions and publishes a newsletter, and Ranger Wilson (Terri Montreal), a modern-day officer who isn’t too pleased with the way the history buffs are using her national park and who is also, to complicate matters, black.

Baizley, and the director, David Pulliam, drag them all further and further into the history that is being re-enacted.

Pulliam explains,”Shiloh Rules is indeed a comedy, and audiences will laugh and enjoy it. But it is a comedy with a conscience. While presenting a humorous story of rival women Civil War re-enactors, it examines issues of national identity and history that typically elicit strong emotional responses far removed from laughter.”