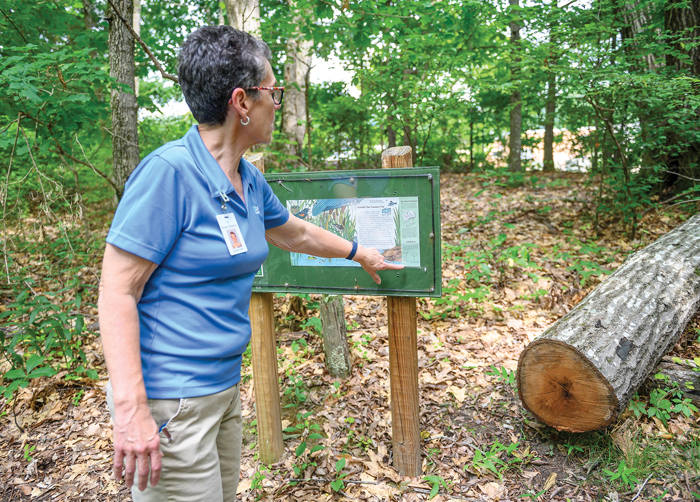 BERNADINE HERNANDEZ/SALISBURY POST Diane Folk points to one of the illustrations along the nature trail for Storywalk at Horizon Unlimited in Salisbury, N.C. 6/6/19

As Horizons Unlimited staff and community members celebrated trail renovations last Thursday, Director Amy Pruitt said one guiding thought has always directed her work at the nature center: “What would Ms. Blount want us to do, moving forward?”

Ms. Blount, or Bea Blount, worked as the Rowan-Salisbury school facility’s lone environmental educator for 20 years before her retirement. According to Pruitt, she had a particular affinity for its hiking trail, now known as the Tom E. Smith Exploratorium.

Until recently, Blount’s passion for the 1-mile length of trail and swampland had been unmatched. Then came Outdoor Learning Coordinator Diane Folk.

“When I had my interview, Amy brought me out here and said, ‘Tell me what you think,'” said Folk. “I said, ‘This is awesome, but there’s so many more things that we could do and have out here.'”

So began a two-year effort to increase the trail’s appeal and accessibility, with Phase 1 of the effort celebrated last Thursday with “Tea Time on the Trail.”

Phase 1, according to Folk, involved an effort to remove the spanning, wooden crossties that previously bordered the trail. The wooden structures not only attracted yellow jackets, she said, but also took away from the scenic experience of the exploratorium: “I felt like if we wanted kids to get back outside that it needed to look like outside.”

Renovations also involved the construction of new pathways throughout the trail to increase accessibility for families, an effort completed by school system maintenance staff, contract workers, and Folk herself.

The goal, said Pruitt, was to draw more community interest in the valuable greenspace and — therein — have it see more use.

“Every kid that comes through this building doesn’t necessarily experience a program outside,” she said. “So we started talking about how to get their families really curious about what all we’ve got to offer back here.”

Still more was added to the trail to increase community interest and attraction: The trail now features a “Story Walk,” with a book on display page by page and at intervals throughout the path.

The stories are changed out every six weeks, said Folk, with some feature activity suggestions for young learners: bugs and birds to look for, plants to spy or trails to uncover.

Center staff have also installed “tree cookies” throughout the path: hinged cross-sections of trees that can be lifted to see what Folk calls “all the creepy crawlies underneath.”

Peedin is an educator with Muddy Sneakers, a group offering hands-on, outdoors STEM experiences to area elementary schoolers. Peedin works with Overton Elementary through the program, and has often used the neighboring Horizons Unlimited trail for science explorations.

“This is literally their backyard,” she said.

Peedin said the trail was a great addition not just for Overton’s learners, but for the Salisbury community as a whole.

“We’re really fortunate to have great trails around us and surrounding us, but in the heart of Salisbury, you don’t have a lot of just ‘nature trails,'” she said. “… I’m just really grateful this is going to be here for other people to use it.”

As the center looks ahead to additional phases in its trail renovation effort, Folk pointed to a few immediate plans: to remove remaining crossties, create a new down trail and — thanks to an easement from the city of Salisbury — connect the trail to the city’s greenway.

“This trail has really become my passion,” said Folk. “We’re really working to get our school kids here, to educate them and let them know there’s nothing to be afraid of down here.”