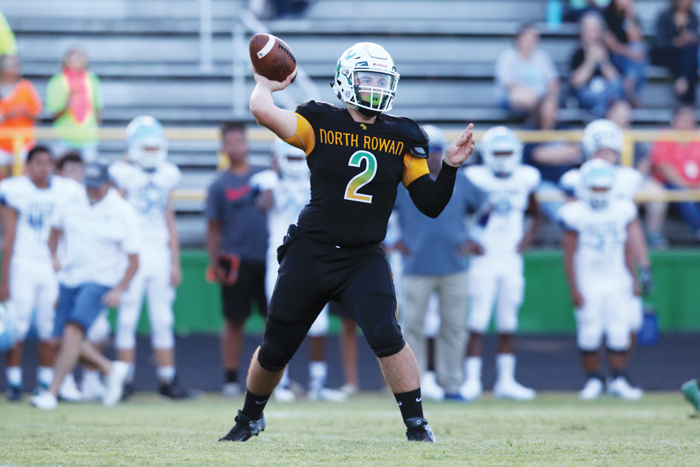 SPENCER — Willis Mitchell, North Rowan’s starting quarterback the last two seasons, will be a walk-on member of the Catawba football team this fall.

“I didn’t get any big offers,” Mitchell said. “So my family and I looked at it, and If I was going to go Division II, why not stay here where I can be around family and go to Catawba.”

The Mitchells moved to North Carolina from Florida as he was entering the eighth grade.

When he reported to a North Rowan High practice for the first time in the fall of 2015, new head coach Ben Hampton assumed the stocky kid was an offensive lineman. It took a little time for Mitchell to convince Hampton that he was a quarterback candidate, the position he’d played since youth football, but eventually he became the jayvee signal-caller.

As a sophomore on North’s varsity in the fall of 2016, he backed up senior Corbin Smith, who turned in a banner season and was voted 2A Central Carolina Conference Offensive Player of the Year. Mitchell didn’t get to take a lot of snaps, so he asked to be used on defense. He became a backup linebacker.

Mitchell earned the varsity starting QB job as a junior and directed the Cavaliers, who dropped down to 1A prior to the 2017 season, to records of 8-4 and 9-3 in his two years at the helm.

“That’s 17-7, and that’s a pretty solid career for any quarterback,” Hampton said. “Willis is a good kid, a tough kid. He got banged up some, but every game we had, he lined up and he was ready to play.”

Mitchell, at times, played quarterback like a linebacker. As a hard-nosed runner, he wasn’t looking for the sideline, he was looking for someone to bowl over. He threw effectively from the pocket, but he also showed he could improvise when things broke down. He created some big plays on the move.

Mitchell, who is listed at 6-foot, 210 pounds, said his development as a quarterback was largely due to North QB coach Bobby Myers, a 1970s standout for the Cavaliers who played college ball at Catawba.

“Coach Myers helped a lot, especially with my footwork,” Mitchell said. “He’s the best coach I’ve ever had. He spent a lot of time teaching me and was the most influential coach on my career.”

Just about every high school football team throws more than it once did,  but Mitchell put up nice numbers, especially when you consider that North had a run-first offense and he operating in the same backfield as stellar ballcarriers Jaleel Webster (2017) and Malcolm Wilson (2018), both of whom claimed Rowan County Offensive Player of the Year accolades.

Mitchell had 31 touchdown passes in his two seasons as a starter. He  rushed for another 11 TDs and bulled for four two-point conversions. He’s 17th on Rowan County’s all-time passing yards list with 3,433. He’s actually only one spot behind Myers, who threw for 3,474 in his high school career.

Mitchell, who rushed for 192 yards as a senior, wound up 25th on Rowan’s all-time total offense list (rushing plus passing) with 3,907 career yards.

His biggest night – 311 passing yards against Albemarle in a 1A Yadkin Valley Conference contest in 2017 — ranks in the top 20 for passing yards in a single game by a Rowan QB.

While Mitchell progressed on the field, he’s equally excited about his accomplishments in the classroom.

“I was barely passing anything and almost failed my freshman year,” Mitchell said. “But I was able to work and bring my GPA up to right at 3.0 before I finished high school. Graduating from high school and never having a losing football season, those are the two things I’m proudest of.”

Catawba has recruited at least three freshman QBs and has several QBs returning, including young starter Ken Avent III. Mitchell has his work cut out for him, but he looks forward to competing and helping the team.

He plans to major in sports management.

“Playing sports, watching sports or just talking about sports, that’s all I’ve ever wanted to do,” Mitchell said.