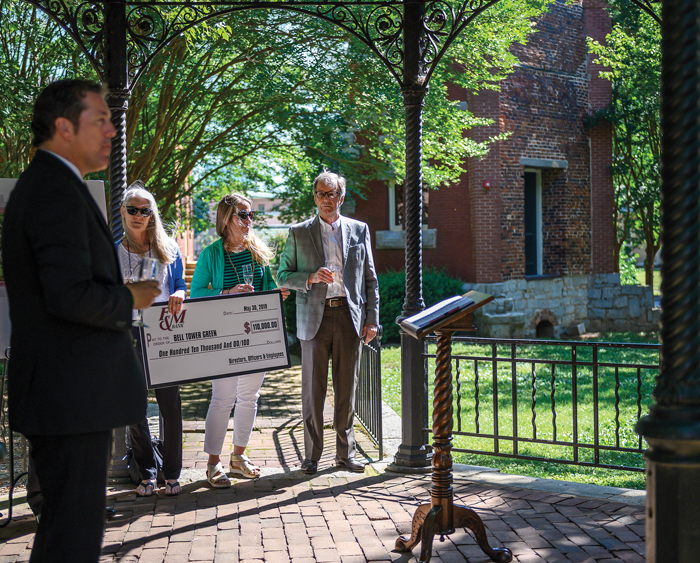 Laurels to the generosity of F&M Bank and the many people who have donated to the Bell Tower Green Park project and provided an encouraging, extraordinary example of fundraising for a public project.

At last count, a fundraising effort had generated $9.7 million for the Bell Tower Green. And Mark Wineka wrote in Wednesday’s Post that there are aims of raising $2 million more for extra street improvements. F&M Bank has contributed $110,000 of that sum after its latest gift of $60,000, which was announced during a gathering Tuesday. That coincides with the 110 years since the bank’s founding.

The Bell Tower Green, once complete, will be a gem of downtown Salisbury. And F&M Bank Chairman and CEO Steve Fisher said it best during Tuesday’s gathering when he called it an “incredibly important revitalization effort.” Proof of that lies in the fact that $9.7 million has been raised to date.

Laurel to the reasons the Salisbury City Council discussed Tuesday for keeping the tax rate flat.

Especially following a countywide tax revaluation in which values increased on average, choosing not to cut the tax rate is a tough call. Because, while the rate is flat, taxes will go up and more money will leave the pockets of Salsburians.

But the council plans to spend the fraction of a cent in revenue per $100 that it would otherwise drop on STEM projects in city schools and the Rowan IDEA Center, a business accelerator, or parks and recreation upgrades. Those are worthwhile projects and, similar to Councilwoman Tamara Sheffield’s reasoning Tuesday, citizens may be OK with that investment over keeping a few dollars in their pocket.

Dart to the situation in which towns such as Landis find themselves — choosing whether to offer recycling because of increased costs.

Restrictions from China on which plastics it accepts have produced conversations in Landis iabout eliminating the service completely. And cities like Salisbury are being forced to adapt and offer guidance to citizens about how to ensure recycling isn’t rejected.

Because of the value of recycling, we hope the town of Landis will shift its conversation to ways to continue providing service instead of whether to stop it. And Salisbury should engage in a user education campaign to ensure, as sanitation crew leader Mark Pullium told the Salisbury City Council last week, half-filled coke bottles don’t contaminate other recyclables when crushed.