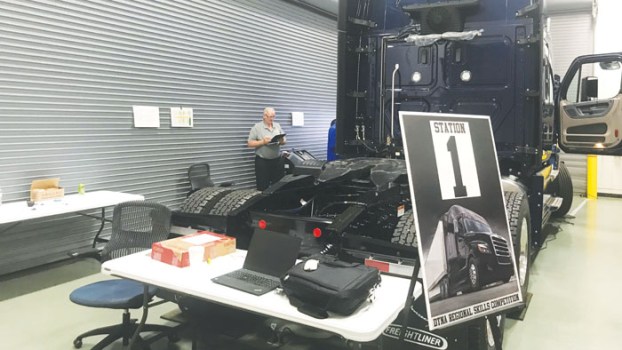 SALISBURY — Daimler North America, owner of Freightliner Trucks, hosted a leg of its national competition for technicians this week at its Cleveland training center.

The Cleveland-based leg of the competition, taking place from 8 a.m. to 4 p.m. Wednesday and Thursday, was phase two of Daimler’s second–annual, three-part Technician National Skills Competition, said Daimler Manager of Service Training Jody Adams. The competition, which drew participants from the U.S. and Canada, had two main groups in which regional finalists could compete — engine and vehicle.

A line also divided up the North American participants into two sides, east and west. Those in west category competed for three positions in the engine competition and three in vehicle. The same was true of those competing in the east category. In total, 12 finalists were announced during an awards ceremony Thursday at City Tavern in downtown Salisbury. Those finalists will be moving on to the national competition Aug. 14 in Portland, Oregon.

The competition was difficult, said Andrew Brown, first-place finalist for the east vehicle category. It was as if the truck had just rolled into the shop and he had 20 minutes to figure out what was wrong with it, Brown said.

The past two days of competition were a way to showcase what Daimler (and Freightliner) do as a company beyond building trucks, said Michael Williams, a representative of the Rowan County plant in Cleveland.

The competition was also an invitation for people from elsewhere who are technicians for Daimler’s dealerships and distributors in North America to experience Rowan, he said.

The national competition originally started with 952 participants; these participants took part in an online competition, phase one of the competition, Adams said. After that, 32 finalists were selected to compete at the regionals in Cleveland, he added.

Biers said he would love to have the opportunity to do it again, he said

To be eligible, participants in the competition had to be a technician from a Freightliner, Detroit Diesel or Western Star dealership and distributor.

The top two winners in Portland will receive $15,000 each as well as a $5,000 toolbox, Adams said. Thursday’s finalists will receive monetary awards, starting at $1,000 as well, he said.

Overall, the West squeezed by to win the competition against the East — but the East did better in the engine category.

Finalists in the competition are as follows:

Editor’s note: The city announced Thursday morning the special meeting would now be at the Civic Center, at 315 S. Martin... read more